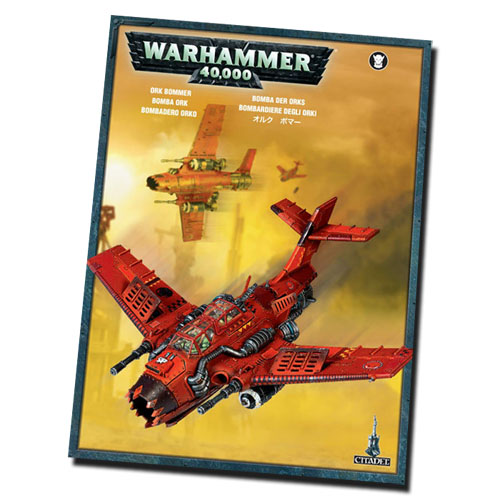 As some of you might know, Ork armies are getting a small update in the form of the addition of three flyer unit entries to the codex.  The models are certified cool, but how are they on the tabletop?

I am going to break the suspense and say that the Dakkajet and its kin will not feature heavily in competitive Ork builds, but if you are determined to add some flavor to your horde I’ll endeavor to instruct you on the uses.  First the basics with some pros and cons of the entries:

Pros:
Speed – 36 Inches is an asset no matter how you look at it
Skimmer – The only skimmer Orks have access to.  We will see why this is important later.
Weaponry – Good amount of anti-personnel / light tank weaponry

Cons:
Armor – These things are super flimsy.  At least they aren’t open topped. (Too many bugs in the pilot’s teeth probably)
Point Cost – In an army with many point efficient choices, these stand out as the opposite of that.
Not a Tank – This is a problem for Tank shock and more importantly RAMMING. (Honestly, what were they thinking here?  Supersonic kamikaze planes would have turned the Orkiness up to 11)

The problem with the Dakkajets is that the cons listed above are really extreme.  I can buy a Battlewagon and have points left over for the cost of a Dakkajet.  I can’t think of a single vehicle with AV ten that cost more points then one of these planes.  All of the variations should be about 30 points cheaper to make them competitive.  The other big issue is that Ork Players are not lacking for anti-infantry options, so it competes for an already overfilled role.  All we can hope is that 6th ed does something to the flyer rules which makes the Dakkajets competitive.

Now that we have established all that, we can start looking at the fun stuff.  How do we use one of these deathtraps?  I’ll break down all the variations.

First of all is the load out.  No matter what variation you choose, splurge for the red paint job.  The reason is this:  Red paint on these planes is a powerful defensive upgrade.  Fast Skimmers, Ariel Assault, and Red Paint allow the planes to move 13”, fire all their weapons, and benefit from the 4+ cover save.  Not bad!  Red Paint is an absolute must-have as a result.

Vanilla Dakkajet:
When upgraded with fighta-ace, I think you will find these to be pretty effective against Dark Eldar opponents.  Their AV 10 skimmers will quickly fall prey to the weaponry of the Dakkajet.  In spearhead deployment they could be good against IG chimera walls as well.  Other than that, I have a hard time seeing any exceptional uses.

In a sense this is the stand out of the bunch.  Orks didn’t have access to any long range cover denial weaponry until now.  A Burna-Bomma armed to the teeth with Skorcha Missiles is a real terror for some armies.  Necron warriors, IG blobs, DE in cover, and opposing Orks all have something to fear from one of these planes.

This thing is just not good –  at all.  For starters, it is the most expensive base cost out of the bunch.  Secondly the Boom Bomb rules are an immense liability.  You have to get very close to the target to use the Bombs, which means a savvy opponent will be able to see it coming and slag your plane.  You also have to roll on a wonky table to drop the bomb.  If there was some way to drop this thing while going flat out, we might have something.

Advanced Tips:
So you got your Fighta-Bomma picked out, now its time to make use of it.  To use the model successfully we need to play to its strengths, and mitigate the weaknesses.  We do this by almost always starting in reserves.  Rare is the situation that you will want to deploy the plane at the beginning of the game.  We want to reserve it because there is zero chance of you taking advantage of the WAAAGH plane rule on turn one, and the plane is unlikely to last longer than one turn anyway.  If you manage to have the plane come out on the same turn that you call a WAAAGH, you have effectively doubled the number of planes you have for that turn.  In addition, starting in reserves forces the opponent to make some tough choices with regards to target priority.  Around turn 3 is when the game goes decisively in favor of the Orks or not.  There are generally too many threats within striking distance of the enemy line, and this causes target priority issues that the Ork planes can use to their advantage to stay out of the line of fire for a bit longer.

The second tip is FIRE EVERYTHING.  As soon as you come on from reserves unload with all your weapons, even the one shot only weapons.  You won’t be around for long so blast away.  This isn’t a set rule so use your judgment, but in most situations unloading is the right way to go.

Lastly, this is the only skimmer vehicle we’ve got.  If it lasts until later in the game, do what the Eldar do, and be annoying.  Contest far away objectives, interdict assaults you don’t want to engage in, and threaten flanks.

Thanks for your time, and keep the skies green. What’s your take on the new Orky airforce?