FoW: Rise of the Sherman 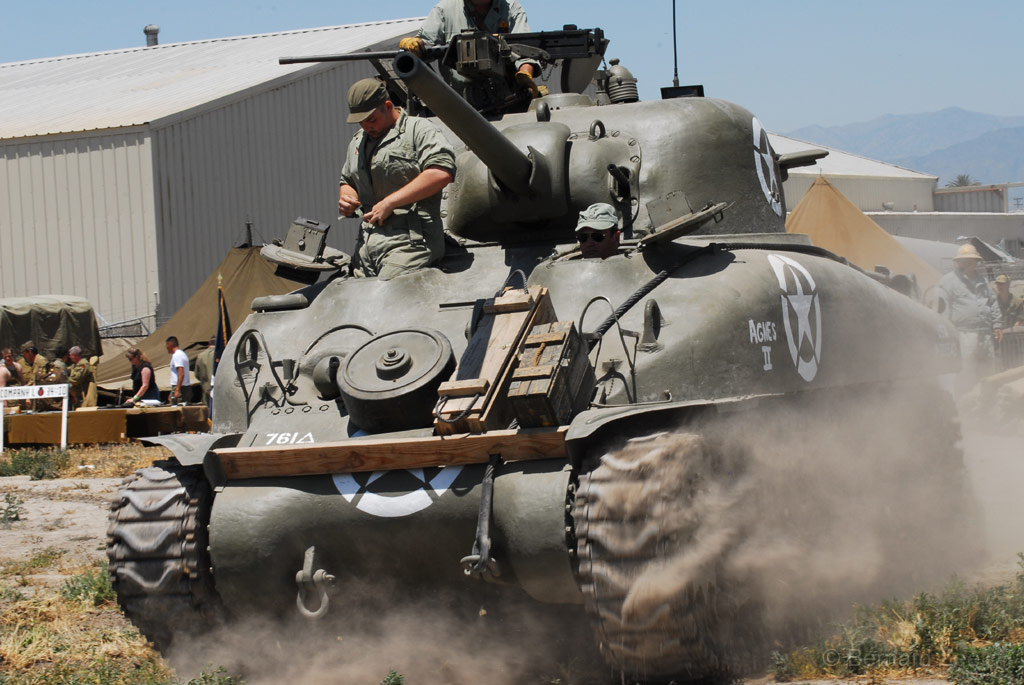 Good evening ladies and gentlemen and all the ships at sea.  Wraith here with another look at the happenings of FoW.  Today, the Sherman gets its due!

For years, American tank players have had it rough.  Though they can field lots of tanks, their armies have never really stacked up against the armored companies of other nations, especially the Germans.  But all that may have changed with the release of the new Blood, Guts & Glory book.

Prior to the release of Blood, Guts & Glory, American tank companies suffered from the ‘jack of all trades, master of none’ syndrome when it came to their primary tank, the M4 Sherman.  While a good all-around tank with descent armor, a good gun, and the Stabilizers special rule (allowing you to shoot the main gun at full Rof while moving, but suffering a +1 penalty to hit), the M4 gave American players a relatively cheaply pointed tank that could handle almost all comers.  Sadly, one of the few things the M4 couldn’t handle was heavy tanks, such as the German Tiger and Panthers.  Against the heavily armored and well armored opponents, the M4 was found wanting, with its only advantage being the ability to field 3 M4s for every Tiger or Panther.  But while Tigers were a rarity on the battlefields of World War II, they are a very common sight on the table tops of FoW.  Because of this and the fact that FoW is designed as an evenly balanced point-based game system, and you get American tank companies that are difficult to win with against evenly pointed German or Russian tank armies.

As a result of this deficiency in main tank strength, American players had to rely on their support units (artillery, air, infantry) to deal with or delay with units the M4s couldn’t tackle.  This often left American tank buffs feeling left in the cold, as the vaunted war winning M4 wasn’t winning many wars on the table tops.  While the Panther and Tiger tanks were great feats of engineering, it could be argued the M4 was more so.  Germany produced less than 7,500 Panther and Tiger tanks combined, while the United States built more than 45,000 M4s throughout the war.  The M4 was prized for its mobility, mechanical reliability, and the sheer numbers the Americans could throw at the enemy.  But recreating these strengths is difficult in a game system like FoW and because of this, the M4 got stuck with the short end of the stick and was side-lined by players in favor of better game winning units.  Even the release of the Sherman ’76’ with a better gun capable of killing those dreaded German kitties didn’t change the overall game and American tank companies were an uncommon sight on the battlefields.

But the time of the M4 as a mediocre tank may be at an end.  With Blood, Guts & Glory, the standard M4 is joined by its much improved and deadly siblings.  With the addition of the M4A3E8 ‘Easy Eight’ and the M4 ‘Jumbo’, American tank lists are now more effective than ever.  Packing a late model 76mm gun and a host of special rules, the Easy Eight brings lethality back to American tank lists.  With rules like Detroit’s Finest (movement distance of 14″ on roads and cross-country terrain), Smooth Ride (Easy Eight tanks does not suffer the +1 penalty to its score To Hit when using Stabilizers, provided it did not move more the 6″), Protected Ammo (Re-roll failed motivation tests to remount bailed out tanks), and Wide Tracks (Improved mobility in rough terrain), the Easy Eight is mobile killer capable of dealing with anything the enemy can throw at you. At the other end of the spectrum is the Jumbo.  While the Jumbo is a Slow Tank (can move only 8″ instead of 12″ over roads and cross-country) and is armed with the standard 75mm gun, it is its 12 Front Armor/8 Side Armor and Jumbo Leads the Way special rule that make them a force to reckoned with.  Because Jumbos look very similar to a regular M4 but has heavier armor, American tankers started using Jumbos as the lead tank in the advances, deliberately encouraging the Germans to shoot at it rather than the lighter standard M4s.  This special rules allows American tank players to allocate hits on an Jumbo tank as if it had the lowest armor rating, assigning it a hit before lesser armored tanks.  This means that those pesky German panzers have a very low chance of killing the Jumbo, leaving the rest of the M4s alive to shoot back without having to worry about being blown to pieces.

While both the Easy Eight and the Jumbo have impressive abilities, there is a down side.  Only a couple of these new bad boys can be fielded per American tank platoon, limiting the amount of numbers that can hit the table.  But this limitation can be overcome with good tactics, the right army list, and the shock a German player will feel when he realizes that his Tiger tanks can’t kill a Jumbo from the front.

Overall, Blood, Guts & Glory will breathe new life into American tank armies.  The Easy Eights and Jumbos will fill holes the older lists had, while the new American special rules will mix up the standard army builds.  Combine these new tanks with a Veteran Skill rating and some really neat Warriors characters (Patton anyone?) and you have the making of a well balanced and highly effective tank army that still has access to a wide array of support choices (remember to bring along some of that awesome American artillery).  While the Tiger and Panther tanks are still some of the best in the game, the new Sherman variants from Blood, Guts & Glory may seriously challenge the reign of the German panzers as king of the table top.

So…will the new M4 variants shift the balance of power when it comes to armored warfare? Or will German killer kitties hold on to the title?  Only time will tell.  Comments and suggestions are always welcome.