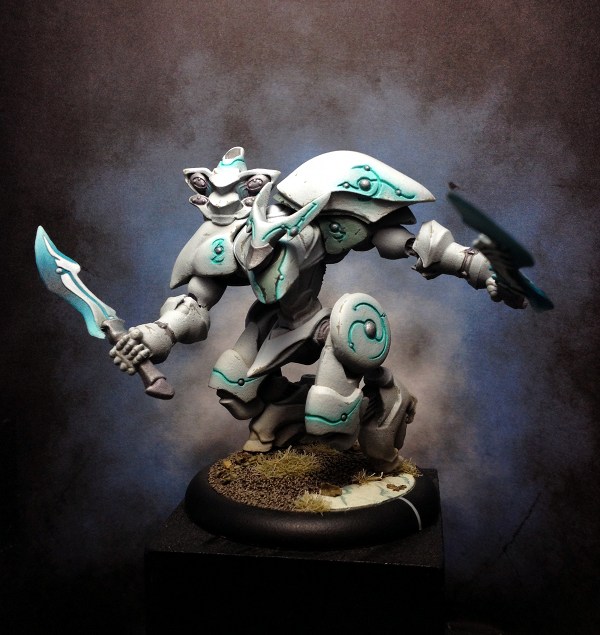 Guest article by Torka Thor.
Hello all! March saw the release of the brand spanking new Retribution of Scryah House Vyre Heavy Myrmidon kit. Lets take a look.
This was a long awaited kit for both the tactical and hobby expansion on the faction’s jack options since their initial release last year… this kit, along with the Hypnos character upgrade, takes the factions jack count up to a solid twelve.
Alright, so we’ll go over the base stats the jacks within the kit share. House Vyre is the jack building competition to House Shyeel; as such they have developed alternate uses of Myrmidon’s unique energy source to expand on their offensive capabilities versus the defensive shield generators House Shyeel employs. In game terms, this translates into potent and tactically flexible ranged attack options… but we’ll talk about that some more later. The loss of the shield generator is compensated with a higher base armor of 19 and a more hardy damage grid at 30 boxes. What they gain in armor and mettle they lose in an inch of speed compared to their Shyeel counterparts….not too much of a loss with the number of movement shenanigans Retribution can pull off and how much you’ll be wanting to take advantage of those ranged abilities. The shield generator also removes the ability to “heal” those D3 points each turn, again not a huge lose. The rest of their stat line mirrors the Shyeel myrmidons. So there’s a run down on the VYRE chassis, let’s get to the specifics of each jack the kit will make. Banshee
“Wow” describes the Banshee pretty well. The Banshee boasts two melee weapons, a P+S 14 light void blade at 0.5” and P+S 17 heavy void blade with reach. Both these weapons have Critical Grievous Wounds which, when triggered, negates the transference of damage, Tough rolls and prevents a model from being healed for a round. At MAT6, the critical doesn’t have the best chance of going off at 44% so be careful in how much you bank on this ability. An often overlooked effect of Grievous Wounds is that its not specific to the model that triggered it i.e. trigger it with the Banshee once and that model is stuck with it for the turn. A good way to make use of this would be to have a Banshee loaded with focus boost all its initials attacks and then have other models in your army take advantage of the ability if it goes off… again not the most reliable thing but it definitely pays for itself when it happens.
The Banshee’s sole ranged attack comes in the form of its Force Cannon, with a 12” range and the Momentum ability behind it. Momentum slams small and medium based model’s D3” and knockdowns large based models on top of the POW 14 damage roll. This offers a good option for dealing with models hiding behind a line of troops and helps even the odds against those higher def models that some of the Retribution’s lower RAT ranged units/models can use. Nothing puts a cramp in a day like all your RAT5 Stormfall Archers missing with their Brutal Damage shots. The Force Cannon also synergies well with Kaelyssa’s Witch Hound ability, allowing a model in her battelgroup to advance and make an attack when one of them is hit with a magic attack. The Banshee’s RAT isn’t the greatest in the world but the possibility of slamming and/or knocking down a caster/lock/key model during your opponents turn will be enough to at least make them think twice about it. The Banshee also has a nifty static ability in Wailing, preventing models from giving/receiving orders and casting spells while within 5” of it. This multi-faceted disruption prevents a lot on the table. Pesky Greylord Covens and Circle Druids get neutered by this and most units in game don’t have much of a chance to take out an ARM19 heavy without the extra dice granted from a charge attack so it’ll remain to do its job for another turn. Tons of versatility make the Banshee’s 10pt cost well deserved. Daemon
Bottom line, up front….this guy rocks a cannon with eDenny’s Hellmouth. A model hit sucks models within 2”, 2” toward it before placing a 3” AOE on the model hit. All models under the template take a POW 12 damage roll. This is not only an infantry killer, it also adds to the Retribution’s movement shenanigans. Both are worth their weight in gold. The Retribution boasts some of the best jack marshals in the game and the Daemon is a fine option for this purpose. With the boost to hit and, perhaps the Dawnguard Sentinels UA’s extra movement granted by Pronto, the Daemon gives a Retribution player a troop clearing, position altering weapon with a threat range of 20”. All this for 9pts; another awesome addition to the Retribution jack ranks. The Daemon’s two melee attacks have the Blessed rule, allowing the Myrmidon to ignore spell effects adding to a model’s ARM and DEF. At MAT 6, combined with the Arcanist’s melee buff its P+S 18/15 open fists can deal with threats on the table that are relying on spells for survivability in hand-to-hand. With all this going for it, any Retribution army can benefit from the Daemon’s inclusion. Sphinx
Last in the Vyre kit’s options is the Sphinx. Wielding a P+S 16 Heavy Force Claw with reach and a Light Force Claw at P+S 14, (with open fists to boot) Dawnlord Vyros has a viable replacement for the Phoenix in lower point games or an effective point filler to use with his Flank ability. Models hit by its Runespear Cannon suffer a -2 DEF against magic attack rolls which may increase the presence of the Retribution’s battle mages in more lists outside of Adeptis Rahn. Of note is the fact that this debuff is not specific to faction models so Aiyana and Lanyssa can benefit from it as well. The shot from the Sphinx will need to be boosted, and it’ll still need to be a good roll, so you may or may not see the benefit of it’s Runespear Cannon in this way. Regardless, at 7pts, it’s a heavy jack whose value is mostly in its cheap cost. Hypnos
So along with a new Retribution heavy jack kit, Privateer Press gave us an awesome character jack to add to our ranks. Hypnos is Lord Arcanist Ossyan’s pride and joy; a powerful extension of his capabilities. Hypnos’ most impressive ability is the effect of its Phase Gun when included in Ossyan’s battlegroup. His affinity gives his POW 14 ranged attack the ability to Void Lock a model directly hit, preventing the channeling, allocation and forcing of that model. Since the ability is Disruption in everything but name it cannot be removed from the model hit, giving the Retribution its most reliable method of shutting down beasts and warjack’s alike. Combined with Ossyan’s own Chronophage Cannon and the Banshee’s Force Cannon, you can lock down a clump of jacks or beasts. Ossyan hits an enemy jack or beast with his cannon, reducing their DEF and centering his 4” AOE on them preventing models within from running and charging in the next round. The Banshee then hits, knocking down said model before Hypnos hits with his Phase Gun preventing it from shaking the effect. This denial can be game winning in scenarios. If you’re running any battle mages with the list they can go about pushing additional models into the effect of this combination.
Hypnos is no slouch in melee either, its heavy and light Arcano-Pulse Fists hit at P+S 16/14 with the added bonus of making warjacks hit by them stationary for a round. Use some battle mages to maneuver two or three enemy jacks into a tight pack, have Hypnos charge and hit each once, park eEiryss behind the big guy to prevent those jacks from shaking the stationary effect and there go those three heavy’s from any plan your opponent had. Well supported, this combination can see those jacks sitting there turn after turn with an Arcanist melee-buff supported Hypnos pulverizing until he’s standing in from of three wreck markers. Hypnos also has Sacred Ward, making him un-targetable by enemy spells. So there’s a brief run down on the latest addition to the Retribution’s arsenal in the war to regain their proud and valiant legacy. Hopefully all this gave you a good introduction into the capabilities of the new Vyre Myrmidons and got some ideas going on how to employ them in your games. Happy gaming.
~ So how are you Retribution players making use of this new gift from Privateer Press?