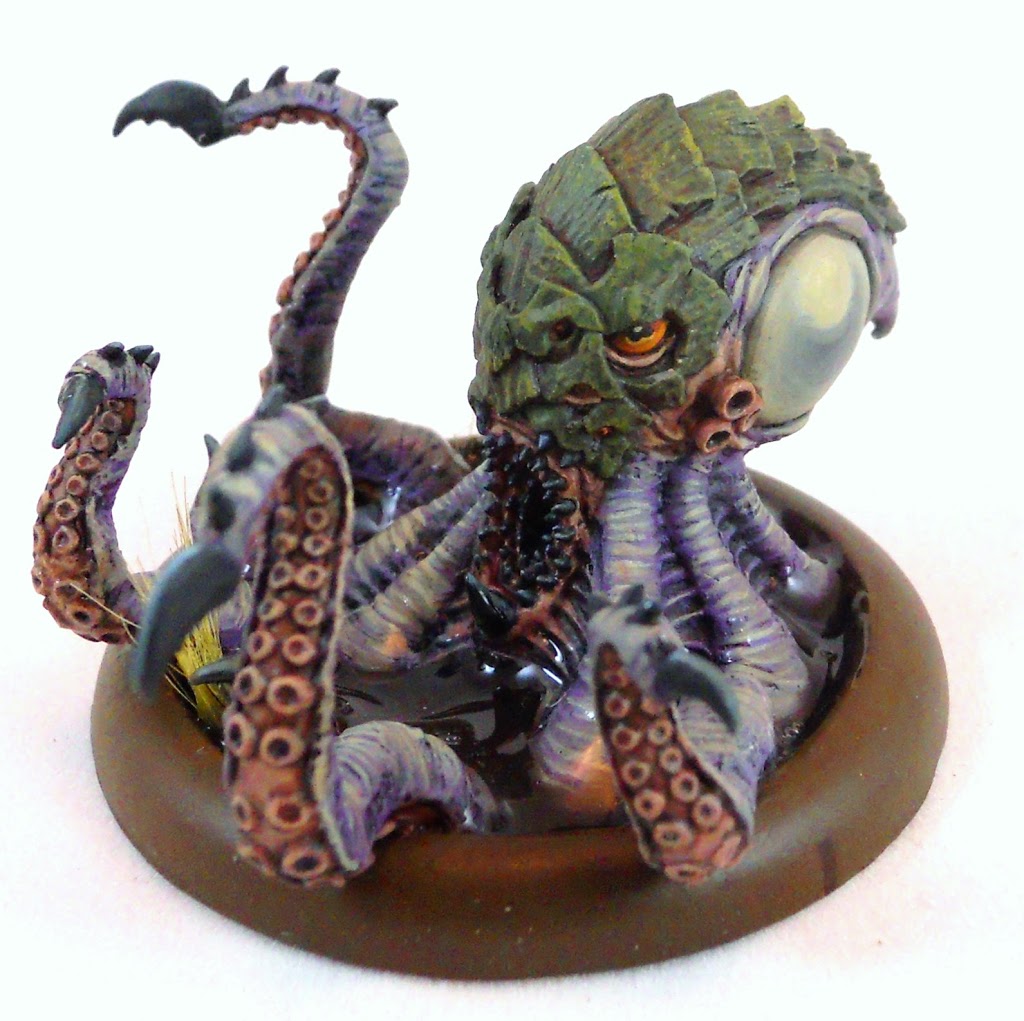 The image of the Swamp Horror from Hordes: Domination was the one that stayed with me.  A hideous creature emerging from the depths to drag down unsuspecting warriors…

Of course… the studio pose of this beast taken to land, and shambling out across the open is also interesting in its own right.  But I wanted more. Here’s our standard horror.  All the pieces you need for this repose are right here. Of course, you’ll definitely need a jeweler’s saw, files, green stuff, and probably a dremel if you want to attempt your own Swamp Horror repose. Making the longer tentacles is a matter of joining together different sections of tentacles from the main frame.  Start by cutting along the Orange lines in the picture here.  These pieces will be joined together to form a single longer tentacle. It may take a bit of filing to get an angle that maintains a curve that keeps the tentacle looking natural..  I’d definitely recommend pinning the two pieces.  You’re going to have to do some green stuffing to hide that join.  It would suck to have it all break from a little shearing force. Here are the tentacles after they’ve been green-stuffed.  I also added a bit of length onto the bottom with green stuff.  It doesn’t require too much detail since it will be hidden under the “water.”  The tentacle on the left is the one shown above, and was made from the right half of the Swamp Horror body.  The one on the right is made the same way, but comes from the left half of the Swamp Horror body.  In all you should be able to make six different tentacles of varying lengths from a single Swamp Horror kit. Keep making more tentacles by repeating the above techniques on other parts from the kit.  Here’s a medium length one. You can even get some use out of the tiniest bits by having them just barely breaking the surface. To really make your Horror look like it is emerging from a swamp, you may want to make a recessed base.  I did this by carefully cutting away the inside of the base with an exact-o.  Patience is key here.  Take your time and use minimal pressure to keep from damaging the ring of the base, or injuring yourself.  Once you’ve turned your large base into just a ring, replace the bottom with some thin plasticard.  Make sure you glue evenly around the edge or the water effects may leak out when you finally get around to adding them. Once you’ve made enough tentacles, it’s time to move back to the rest of the body. Glue the head, mouth, and what’s left of the halves together as normal.  I dremelled away quite a bit of material from the bottom so that the head would sit at a slight angle in the base. This gives it a bit more motion and makes the creature look like it’s peering up at something taller than it is. The head was affixed to the base with Green Stuff to accentuate that angle more and give it some more volume.  Then comes the part that will probably be most challenging – sculpting tentacle mass back on to the head with Green stuff.  After I’d made the basic shapes, I waited for them to cure about half way.  Then I went back with a round tool to form the folds and ripples on the skin.  One of the keys to using green stuff is knowing the right time to work with it.  If you want smooth edges it’s best to work with it once it has cured a bit. So once you finish the head and tentacles it’s time to move onto painting.  Although it’s important to note that I didn’t glue the two longest tentacles to the base.  I kept them separate to make painting easier.  They weren’t glued on until right before I added the water.  Like any conversion, it was as much work as it was fun.  But I’m really pleased with how it came out.

~So there you have it… a very different Swamp Horror from the stock pose.  Hopefully I’ll have a painting article up to follow soon.