40K: Back to Grey Knights Again 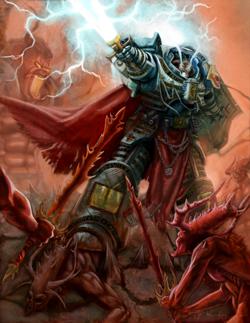 So I’ve decided to begin 6th edition playing my Draigowing army again. It’s a great army to start the new edition and learn all the rules. Here’s what I’m seeing in 6th.

Some of the units I often use got even better and others are now worth taking in a competitive environment. We all know that Necrons are probably the best army now so I’m putting them aside for awhile. I am not exactly sure how I want to run my Tyranids yet but eventually I’ll come back to them again. It’s going to take some careful planning to revamp my Tyranids to be just the way I want them so I’m counting on my first games with Grey Knights to help me figure that out as strange as that might sound.

Some of the Grey Knight units got worse too though so here is a list of some of the major buffs and nerfs:

— Draigo is fearless and confers this to any unit he joins such as Paladins which is huge – no more need to worry about being tank shocked off the table or now succumbing to Fear. It really makes a lot of sense. Draigo is still a beast and probably the most resilient hand to hand combatant in the game. My first game of the new 40k was versus Tau allied with Space Wolves… Draigo was wading through one unit after another smiting down the xenos and pups all alike – very epic indeed !!

— No longer can you use complex wound allocations but Paladins all count as characters and with the rule Look Out Sir! it’s just as good (if not better with Draigo attached) plus you don’t have to waste any points making your squads fully complex… And every point counts when you play Draigowing. Paladins are still one of the premiere generalist units in 40k, maybe even more so now since the assault phase has taken a really big hit from the nerf bat.

— I have always used a Librarian and still plan to do so. They really buff your army and provide some much needed protection in the way of Sanctuary and The Shrouding. I see 6th edition as being more of a defensive game now so the better your overall protection the more damage you can keep dishing out.

— The Nemesis Dreadknight got several buffs… for instance the Nemesis Doomfists now count as S10 and of course the 2+ armor save is very strong. Sure he is not a flying monstrous creature but he is still very fast with the big jump move and can act as an ultimate shock troop. I plan to often hold him in reserve and use the Outflank rule via the Grand Strategy.

— Psyflemen took a huge hit with the new hull points so I’m planning to run a Vindicare assassin to help plug that hole. In my game versus Tau allied with Space Wolves he slew a lone Thunderwolf then fought off a unit of Wolf Scouts and broke them. I’d love to run the Eversor assassin as well but without the rule to infiltrate this monster it can be really tough to get him into melee.

— Grey Knights have access to one of the best fliers in the game – the Stormraven ! There are obviously some risks embarking a pricey unit in a Stormraven but I think it’s definitely worth it. The trick is to put a lot of pressure on the enemy with other units so they can’t focus all their big guns on your flier(s).

— I’m also planning to run a Landraider Crusader since this is one of the most resilient tanks in the game again. It can still be one shotted off the table but the chances are much less now. It’s main role will be to shuttle a key unit to a strategic location on the battlefield and draw enemy fire away from my other units. Having two vehicles that are hard to destroy with assault ramps is very strong.

Like I said above the assault phase got hit hard with the nerf bat. Shooting is even more powerful now. It’s important though to realize that assaults can still win games because they are so deadly. A squad of Paladins with Draigo attached rampaging through your enemy’s lines can win games.

~BBF out.  How’s 6th edition treating your Scions of Titan?