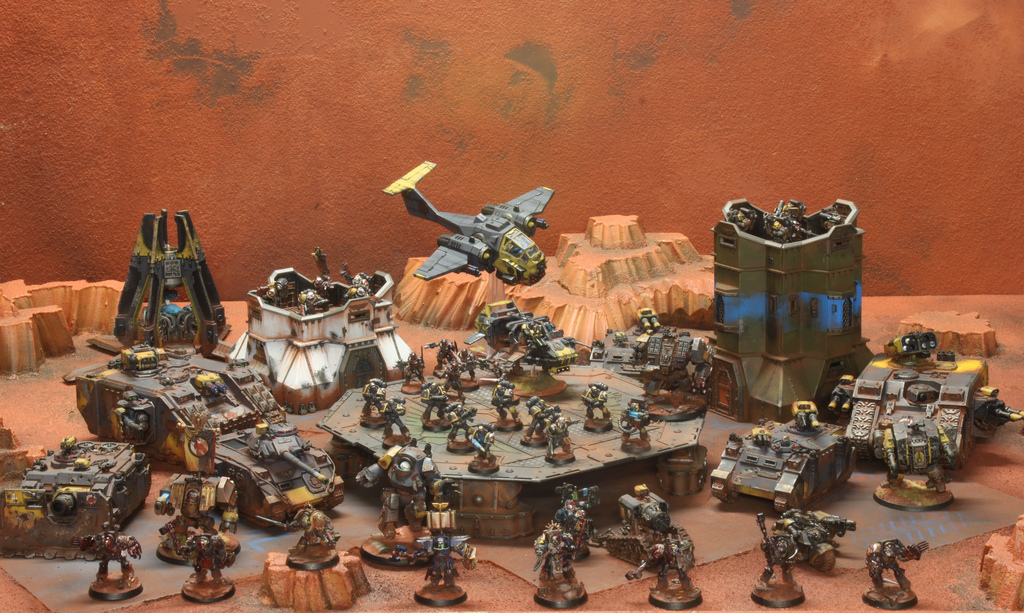 I’ll just stand back and let the creator do the talking:

I showed Larry a pic of my army for a Wargames shot a little while back and he asked me to do a small feature on why I chose my army, its composition and the painting techniques involved. I picked Space Marines originally because I was getting back into the game after an edition and a half away. I found the AoBR boxed set as a cheap way back in through the Marine half and not knowing much about the game at all anymore I figured it was a good force to start with. Before I picked a chapter I had a bit of a look around the internet and somehow managed to make my way to the Forge World website and discovered the pictures of Phil Stutcinskas’ Red Scorpions. I didn’t know what it was at the time but I loved the weathering on the army (his tanks in particular) and the Charcoal Grey and Yellow armour of the Red Scorpions and knew this was the army for me! Long story short I bought some FW stuff, then I bought some more and more until you see what I have now! I swear handling their resin has some addictive properties.

My army is mainly composed of things I like the look of and thought I would enjoy painting. I picked the wrong army/game in a way to be super competitive as I am a hobbyist foremost and a gamer second, but my attention span doesn’t really allow me to paint things that require repetition, hence the lack of duplicate units. It is still fun to play with though and I do alright in my group of casual gaming mates with what I have. I like doing a few conversions and I am getting a bit more bold with some of my more recent stuff as my modelling skill gets better (I think I have been back into it for about 2 years now but only really concentrating on getting better as a hobbyist for the last year) and I guess my two favorite things in the army would be the recently released Storm Talon and the Praetorian(Predator) I did a month ago. For the paint work on my army, I do everything with a brush save for the base grey on the vehicles which I used a Tamiya Grey spray for. I really want to get an airbrush but I haven’t gotten around to it yet and I think it would speed my process up a lot taking some of the layers out of the yellow in particular. I typically start with a black primer, then apply my grey base coat to the infantry and vehicles. Then I layer the yellow and black on in the chapter patterns before doing some highlighting and detail painting and applying the battle damage in the form of sponge chipping on the areas that would receive the most wear. A spray of dullcoat before I add the weathering pigments to the appropriate areas where I figure it would gather and give it a light dusting of dullcoat again to fix the pigments in place. Finally I gloss up the gems and base the models if needed and they’re done.

My army is pretty gritty I know and I have copped some heat from the internet in certain circles as people don’t believe Marines would look like this, I have modeled them to appear as though they are in the heat of battle though, perhaps during a long campaign in a war where there is no possibility to pull back for repairs and repainting. If the novels about space marines have taught me anything it’s that these guys like to get stuck in so it’s likely they would end up looking very much like this during extended operations. Thanks very much for taking a look and if I had any advice to give while I have the stage I would say, be original(or as much as you can) and be brave with your hobby work. I think it’s tough to try and do your own thing but it’s worth it in the end and you’ll end up proud every time you pull something from your army bag and know that you put a bit of extra effort in to making it your own.

Lets give it up folks.  Tell him what you think in the comments.  I for one am very keen on that StormTalon conversion.