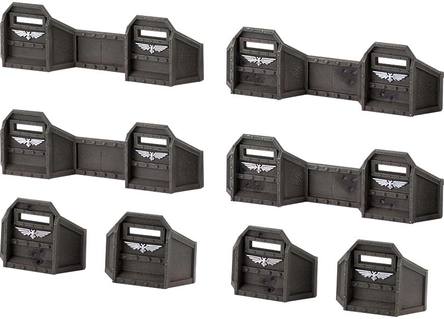 Aegis Defense Lines are a lot more tricksy than they seem at first glance.  Here’s the skinny…

First up, lets look at what an Aegis Defense line give you. For 50 measly points you get a set of 8 sections, 4 short, and 4 long. You can upgrade the lines with your choice of a Quad-gun, Icarus Lascannon, or a Comms relay.

The big rule is the one so often overlooked:

That means the lines can to be paired up allowing up to 4 separate pieces of cover, arranged as you see fit.  You can pair up short-short, long-long, or a short-long combos.  In practice with the ease of achieving 25% coverage for vehicles you can often give every vehicle you have cover right off the bat. You can now turn even an empty deployment zone into a WW1 style defensive “trenchline” matrix.

Here’s just some of the basic deployments I’ve seen:

3) The Maze – using all four subsections to link up all your area terrain to form a “maze” of difficult terrain to slow down attackers and movement.

4) Quad Pillboxes – put your most valuable shooters in dual lines deep in your backfield, with your picket troops shooting from behind a pair of forward lines. Counter-assault units go between the inner and outer lines.

5) Link the Tanks – put your tanks hulldown behind terrain, and link your tanks with Aegis lines manned by your troops.

Now that we’ve got your mind tinkering with layouts.  Lets go over the basic choices for the weapon upgrades.

The Quadgun – is probably the generically useful choice.  Good versus light vehicles and devastating versus flyers.

The Icarus – is a bit of overkill versus flyers, but if you man it with some nasty characters, you can reduce enemy tanks to slag and make those expensive flyers cry.

Finally, the Comms Relay – can be a huge hit for those reserve based armies with lots of deepstrikers, or tons of flyers themselves.

~The humble Aegis Defense Line has gone from zero to hero in just over a month.  What are your tricks for using them out there?