40K: Flyers and Their Impact in 6th 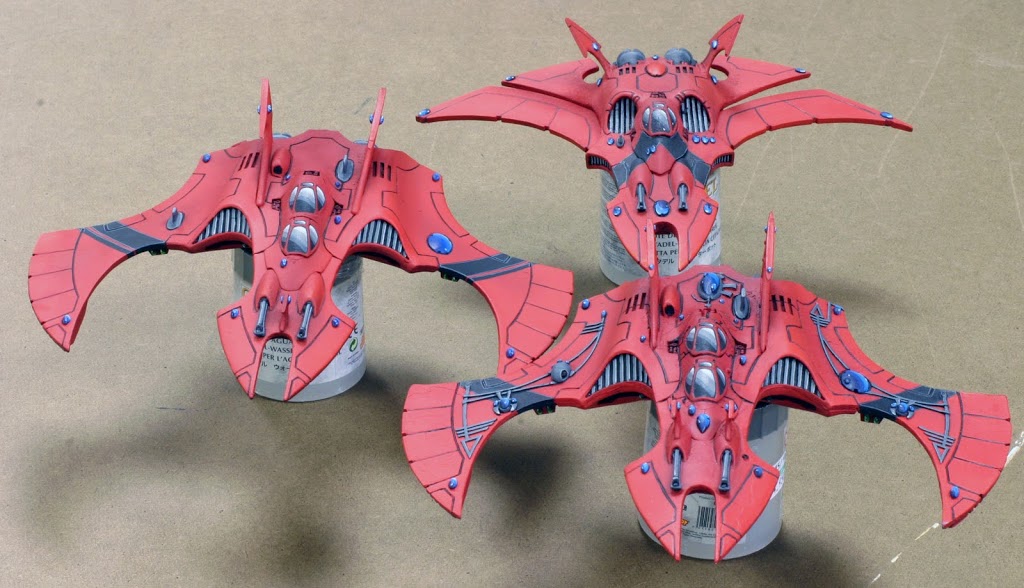 Hi all !! Black Blow Fly here to discuss the impact of flyers in 40k6.

We have all had a chance now to play some 40k under sixth edition. I have found flyers to be quite formidable and I will include flying monstrous creatures (FMCs) to my list below since they function in a similar manner. Some armies have access to flyers while others don’t but via allies most every army can take at least one.

In my opinion there are two ways to go about designing a competitive army now – you can adopt either an offensive or defensive stance in regards to flyers when building an army for 40k6.

If I have missed any feel free to comment.

The Stormraven, Valkyrie and Vendetta have the highest armor (AV12) but weigh in at a premium for points compared to other flyers. Two Stormravens in one army are a considerable amount of points while the Vendetta is more affordable and offers better anti-flier capabilities in my opinion with three lascannons. Necrons seemed to have transitioned quite well from fifth to sixth edition and I rate the Doomscythe as the best overall flyer which bares tangible evidence from the first 6th edition GT (Golden Throne) held earlier this summer in San Jose, California. The Chaos Daemon flying circus is also another formidable list that can field up to five FMCs. Chaos FMCs are quite resilient in the swooping mode coupled with good invulnerable saves plus the potential rerolls if the Fateweaver is included… If you don’t have the right tools to deal with the daemonic flying circus it can be a long game.

I am currently of the mindset to go more defensive versus fliers and FMCs. We don’t know when GW will release flakk missile and if it’s of limited application then the flyer could be the new mech nemesis. To effectively deal with enemy flyers and FMCs I’m currently building my lists to incorporate high volume of S6+ firepower coupled with twin linked weapons and the use of the Divination primaris psychic power. While flyers are certainly very strong coming out of the gate they all have some inherent weaknesses that can be exploited. I have found that while one Stormraven won’t last long versus an enemy army with a high concentration of flyers it’s still one of my best counters. The Grey Knight Stormraven armed with hurricane bolter sponsons, twin linked assault cannon, twin linked multi-melta and psybolt ammo can drop two enemy fliers in one shooting phase (due to Power of the Machine Spirit). Even if you only force an enemy flyer to evade that is useful as you have decreased their firepower for the following turn and they might then be forced to fly off the table.

There are other good defenses such as the Aegis defense line with a quad gun – combined as such the two elements provide excellent cover while being able to potentially pick off an enemy flier in one shooting phase. The total points (100) for the pair is a great deal for any army.

We were told that mechanized armies are going away in the new meta but I see them as another good defense versus flyers since kill point missions are becoming much more scarce. I think this is another effective answer in terms of defense versus enemy flyers. Cheap transports are still a good investment for most armies – the longer it takes for the enemy to take a crack at your troops the better off you are.

To me it seems like Tyranids again drew the short end of the stick with no access to allies and the Flying Tyrant is very expensive pointswise for what you get in terms of performance. I used a Fyrant in 40k5 primarily in a support role to my army but now they are better suited as a vanguard. I think that Tyranids still have some semi decent answers such as Hive Guard.

So even with the vast multitude of armies that can be fielded now due to allies I see a new meta emerging and the flyer seems to be a big linchpin. If you want to keep playing your old 40k5 armies that’s fine but be prepared to deal with units that inherently have a big advantage versus armies that rely upon little else than luck to drop a multitude of enemy flyers.

It’s still quite early but I don’t see fliers taking a big hit from the proverbial nerf bat any time soon.

I will finish up with two practical examples that demonstrate the strengths of flyers.

A bit pricy for the points but they are certainly death from above. Psybolt ammo plus everything twin linked is awesome when you have to evade and can only snap fire. You can take Solodins to carry cheap scoring|denial units along for the ride.

‘Ard Boyz Style Flyer Army List
Here is a list I’ve been working on lately that combines the strengths of two currently top tiered 40k6 armies through the application of allies. Note that Grey Knights are the parent army.

This army has a total of three flyers and one jump monstrous creature. It’s a small army for the points but most every unit can inflict hard damage. The Immortals are there to include a Night Scythe and provide another scoring|denial unit. This army has lots of tricks up its sleeves as well plus it’s a lot of fun to play if you have a competitive bent.

So what is your take on the new flyers?