Malifaux 101: Introduction to the Game 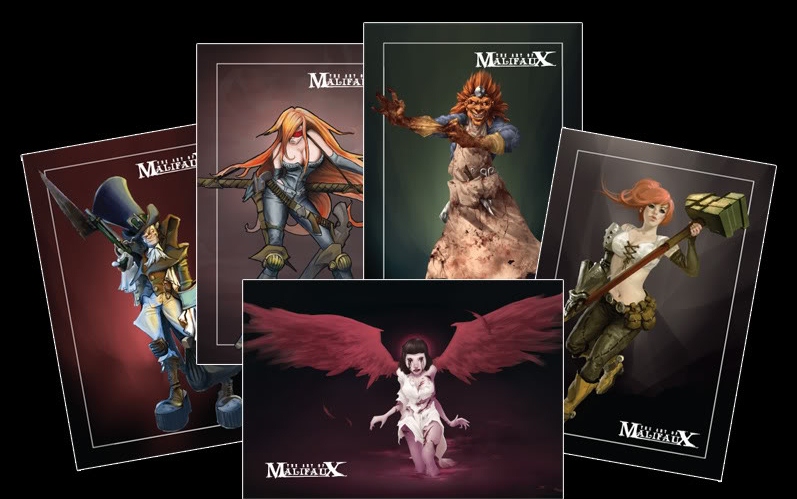 Hi readers, this is the first article in the Malifaux 101 series, these articles will introduce various aspects of the game for those who know little or nothing about this rapidly growing  miniature game.

Malifaux if a skirmish miniature game played with anywhere from 3-4 to 20 plus models depending on the size of the game played, usually we play on a 3′ x 3′ or in a larger game a 4′ x 4′ board, which is usually filled with at least 18 pieces of terrain, in this game you do not want a firelane from one end of the board to another, the more terrain the better in my opinion, the game usually does not revolve around just killing your opponents but in something called startegies and schemes, but we will get onto these later as well as being part of their own dedicated Malifaux 101s in the future.

Firstly we will take a look at the background to this game.

Malifaux is a blend of of various genres, to quote Nathan Caroland’s (the Creator of Malifaux) signature on the Wyrd Miniatures forums “I’m often asked what genre and elements make up Malifaux…….that’s simple, its Steamvictoriohorrorwestpunk! Hope that clears it up for you”. Malifaux blends elements from these various genres into one unique whole.

The Steampunk element comes in through various elements in the game such as the Leviathan which is a gigantic steam powered construct, as well as steampunk abominations and steamborg executioners which are a blend of flesh and steam powered machine, as well as other fantastical things like the Coryphee which are bladed mannequin robots, the mechanical doves and the more utilitarian (for the Guild anyway) machines in the Peacekeeper and the Guardians.

The Victoriana comes in with both the style and the feel of the city of Malifaux, as well as in the styling of several characters such as Seamus the Mad Hatter who is a blend of Jack the Ripper and The Mad Hatter, and also fellow characters like Molly Squidpiddge and the Belles.

The Horror element comes in again with the characters like Seamus, but also in characters like Nicodem and McMourning which embrace lots of elements from classic horror novels, film and television, with the flesh constructs and Dr McMourning taking a lot of influence from Frankenstein. There is also the more sci-fi like horror; especially in the larger beasts such as Killjoy and the Nephilim.

Finally the Western element is represented especially by the Ortega family, these are the gunslingers of the Malifaux world who live on a ranch called the Latigo deep in the enemy territory, as well as the outlying prospect towns and villages deeper into the world of Malifaux away from the relative safety of the City itself.

You can find a link to the whole history of Malifaux here, this will give you a run down of the whole background of Malifaux, from 1787 when the Breach was first opened to 1901 which is the present day in the world of Malifaux.

The game of Malifaux incorporated some traditional elements of other miniature games as well as some others which are fairly unique to the game.

The game utilises cards instead of dice, you have a hand of generally 6 cards at the start of the game, instead of rolling dice you flip cards, you add this total to the attacking or resisting total, who ever gets the highest total wins, in a draw the attacker wins unless they have an talent or spell that  says otherwise, you can generally cheat a card in from your hand to change the card you flipped changing either the total or the suit of the card (these are important in things called Triggers). You can have positive and negative flips, a positive flip means you flip 2 or more cards choosing which ever card you want, on a negative flip you flip two or more cards and you have to choose the lowest value card.
If you flip a Black Joker (0) you have to choose that one, if you flip a Red Joker (14) you can choose to use that unless you also flip a Black Joker.

The game is won and lost in Strategies and Schemes, you flip for strategies after you choose what faction you are playing as, you can have a different strategy to your opponent, if you both flip the same you play a shared strategy, these are worth up to 4 Victory Point’s. You then chose various schemes (2 in a scrap or 3 in a Brawl size game) in addition which are worth either 1 or 2 VP’s each, unlike a lot of games unless you flip for Contain Power or Slaughter your crew can be entirely wiped out and you can still beat your opponent.

Strategies range from things like treasure hunt where you have to collect and protect some treasure, to a Line in the Sand where you have to set 5 dynamite markers whilst preventing your opponent disarming them, to the aforementioned Slaughter where whoever kills the most soulstones worth of models wins.

Each model can generally perform 2 general actions per game turn as well as one single (0) action, most actions in the game are (1) point actions, there are however some that are (2) point actions as well as an even rarer few that are (all) actions after and before which you cannot perform any other action in that turn, some models can perform additional actions for example (+1) fast gives one extra general action point and (+1) melee expert gives one additional AP for a melee strike.

Like most games the models come with a statline.
Wk/Cg: this is Walk and Charge, a walk is a (1) action and a charge is a (2) action, a charge incorporates a move as well as a melee strike with a positive flip on the damage, these are the number of inches that the model can move for the appropriate AP cost.
Ht: This is the height of the model for purposes of thing like Cover.
Wp: This is the Willpower stat and this is often used in resisting effects.
Ca: This is casting, and is used to cast various spells as well as for some other attacks and resists.
Df: this is the defense stat, this is often used to resist damage.
Wd: this is the wound stat, and is how many wounds the model can take before it is removed.
Cb: this is the combat stat for ranged and melee strikes which represents how good they are with the weapon, even if they have no attack printed on the card everyone has access to a Cb3 weapon Bash.

This covers a few of the rudimentary basics in Malifaux, we shall go further in depth later in the series, but this seemed like a good taster, for further information you can go here to the Wyrd forums where you can get a great deal of advice for a beginner sometimes even from the Wyrd staff members themselves or to Pull My Finger, this tactics wiki had a great deal of advice on all of the models in the game.

See you out there in the world of Malifaux!