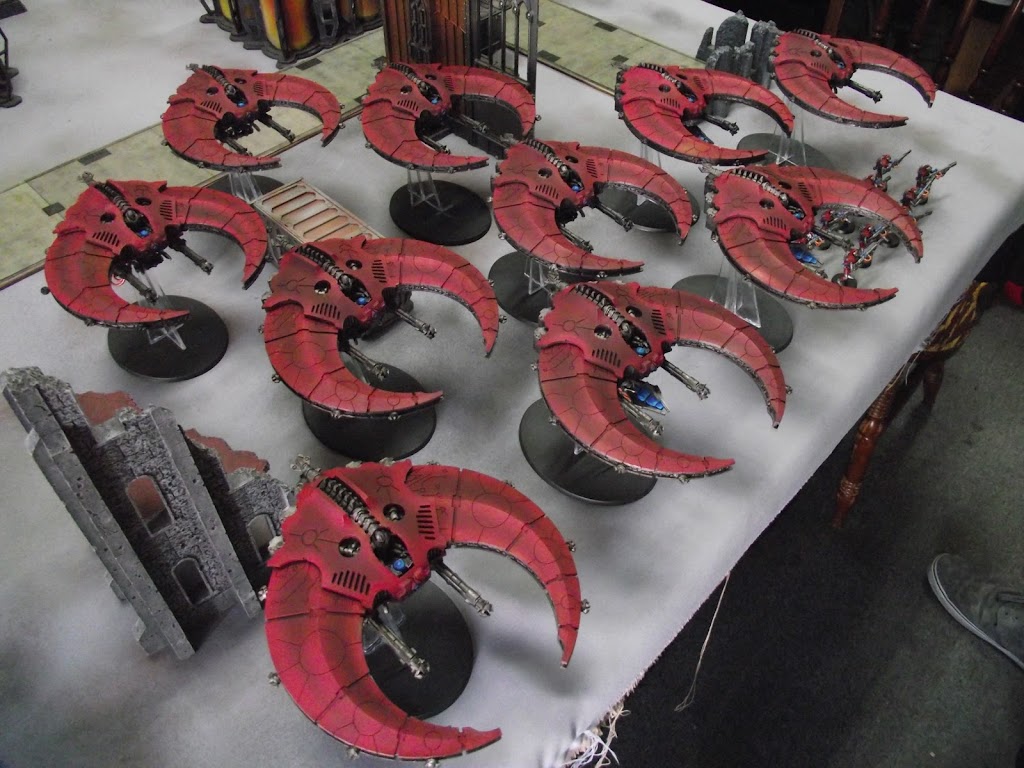 Cron Air (Necron Airforce) is easily the most hated list in the game at the moment, but are their days numbered?
Reecius here from Frontline Gaming to discuss those zany robots and their aeroplanes!
Cron Air is an incredibly powerful army that in the current meta is also not all that fun to play against. Few armies can actually fight it in a straight up fight and must resort to lateral tactics to defeat it (board control, playing to objectives, etc.). Flyers, due to their special rules, create an army that with very little skill, can dominate most “normal” armies leaving them with few to no tools to fight back with.
And before folks start popping up with the comments of: “I beat Necron Flyers all the time, they aren’t that bad,” it doesn’t count when you’re playing against 1-2. It’s when you’re up against an army comprised almost entirely out of Flyers that you are really up against Cron Air, and it is brutally powerful. 2 Flyers is 4 times as effective as 1 (double the firepower, double the durability) and that just gets exacerbated as their numbers go up. Even worse than its inherent power, is that fact that playing against it feels like an exercise in futility as your units fight back with little to no effectiveness. I get mail almost every day from folks asking for tactics against flyers, lists to combat them, etc. In our experiences, we’ve sent Cron Air like a hot knife through butter against some top lists. At our Feast of Blades qualifier, Fuegan17 with his Cron/Ork flyercentric army absolutely dominated everyone else, including an IG army with the tools to fight flyers.
We keep a close ear to the ground when it comes to rumors and have developed some reliable sources over time. Between what we’ve heard and general internet chatter, it appears that the new Chaos dex may have a number of tools to deal Cron Air (or any flyer heavy list). The Dragon is rumored to be a flyer killer, and judging by its profile, I can see it. Although, with its stats, I think it will do just dandy against pretty much anything. With a strength 10 vector strike, and 2 butcher cannons (str8, ap4, heavy4) it will make a mockery of the average flyer (av12 and down). However, being a 12/10/10 vehicle itself, if you go second you’re just as likely to have your Dragon dropped by rival flyers.
Havocs getting Flakk missiles is still an unknown. We have rumors saying that they will replace your frag and krak missiles for +5 points (in which case, I don’t think they will be a very good choice as against every army not using flyers you just wasted a lot of points) or that for the same price you get them in addition to your normal load out. That makes them much better, and havocs could become quite a flyer deterrent…so much so that they will be shot off the board immediately by all available flyers as target priority #1! Without interceptor, they will get shot before they can shoot the flyers and you can bet your bottom dollar that every gun that can shoot them in a flyer heavy list, will. What does that mean? Will Chaos set the precedent for things to come and bring the tools to the table to fight the Air Force armies, or will they get ground under heel? Only time will tell but I think this will be a good measuring stick to judge future releases by and the long term power potential of the flyer heavy lists. I personally hope that the continued push towards balance holds true and applies to flyers as well.
What have your experiences with flyers been like? Have you found them to be a tad overpowered? Or have you discovered some means to combating them you’d like to share with the community? What are you most hoping to see in terms of AA options in the new Chaos dex?