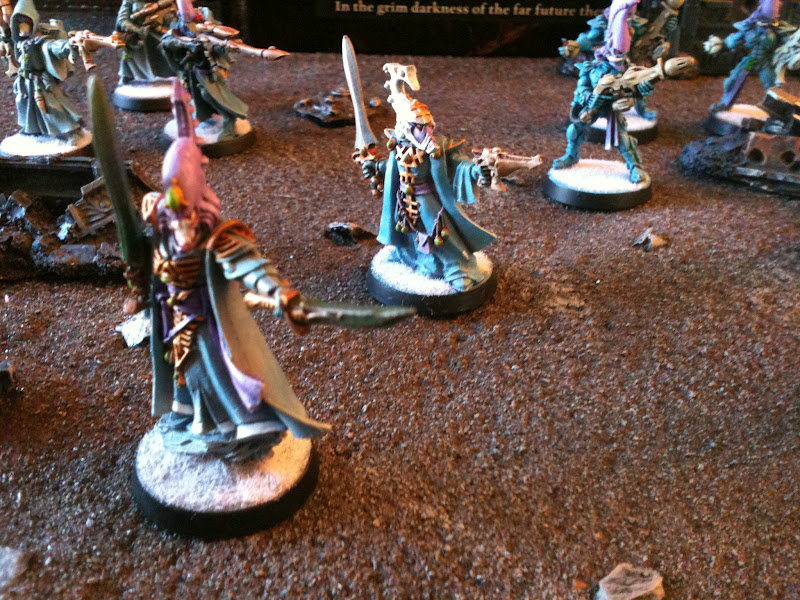 Fritz here… with a question: Do you build your lists to capture the bonus points of Slay the Warlord, First Blood, and Line Breaker?

We all know about building our army to capture objectives and complete mission goals, often taking at least six scoring units to accomplish this, just as we build our list with units taken to go out and remove opposing models and scoring units.

The bonus points are elements that you have to plan for, rather than victory points that you may or may not pick up along the way. Sure, they can break a tie and pull of a win for you, but more importantly they give you an alternative mission to winning the game.
Let’s take a look at the units I take in my Eldar warhost who are tasked with capturing these bonus points for me- of course every codex is different so view this as a “template” of sorts and see what you can slot in…
Slay the Warlord begins with my HQ choices – Eldrad and a generic seer since dual seers are now standard in running Eldar, or should I say trying to run Eldar in a competitive setting. This opens up mindwar access for two models who are going to be hunting those HQ choices. Most of the HQ choices we encounter are aggressive front line types- getting up there and wrecking face like Mepheston, etc. so threat and range for Mindwar is never an issue since both seers are central on the table to support the rest of my warhost. I will point out that there are many layers to get past with Mindwar such as deny the witch with a potential hood boost, cover saves, D6 roll off, etc. but blasting with two is just the first layer of my Slay the Warlord strategy. Also mid-field is a big group of pathfinders and with some Guide seer support are quite deadly with the Eldar sniper rifles- who are also gunning for the warlord if he shown himself.
First Blood is next, and is a dual fold strategy- we want to deny our opponent first blood, and take the point ourselves- and this is the most important of the three since it goes to either you or your opponent and not both in most cases. I did have my Farseer and a flying Hive Tyrant both kill each other at the same time for both warlord and blood points but that was once out of easily a few dozen games so far.
In my unit selection, and one of the reasons why I run footdar now, besides the shift to mass infantry in tournaments, is that I don’t want to have any units that can be taken out in a turn of shooting as much as possible. Lone fire prisms and grav tanks are an easy kill, and for the points what they bring to the table are just not cost effective for the codex, but that is a post for another time. While I might get a lucky long range shot off on an opposing vehicle the main thrust of my first blood unit is a large group of Fire Dragons with a pike Exarch and farseer support (Guide/Doom). Laugh at the point cost in the codex – Fire Dragons still kill anything and everything dead.
And then we need a plan for the Linebreaker point, which is hard to score in some missions since by the end of the game both sides might not have much left in terms of models. For this point I have my Swooping Hawks, who admittedly do more dropping grenade packs every round then actually staying on the table and fighting, but by turn five and six with less threats on the table, they are then in a perfect position to drop in, run into terrain, and score the point. So what units do you have in your codex that you can dedicate to earning you these three secondary victory points?
Bonus Eldar Strategery!
Off topic just a bit, but still related is how I’ve adapted my Eldar play style for 6th edition, especially given the age of the codex, and the fact that the majority of the codexes out there are now 5th and even 6th edition written.
How can the space elves hold their own?
Turn five contesting might be dead and done, but that just means a new strategy against the mon-kei must emerge…
First thing I ask myself after deployment is if I can beat the opposing army on the primary mission. Can I capture enough objectives to win? Most of the time, playing with pure Eldar (no allies) this is a very hard thing to do, especially given the point cost vs. usability of our troop choices. If I can’t take the field and capture the objectives I’ll then play my entire army for a tie on the primary- which is possible if my opponent is not aware of it. I throw everything in my army against their troops and scoring units first, while aggressively pursuing the secondary objectives- tie on the primary and win on the secondary.