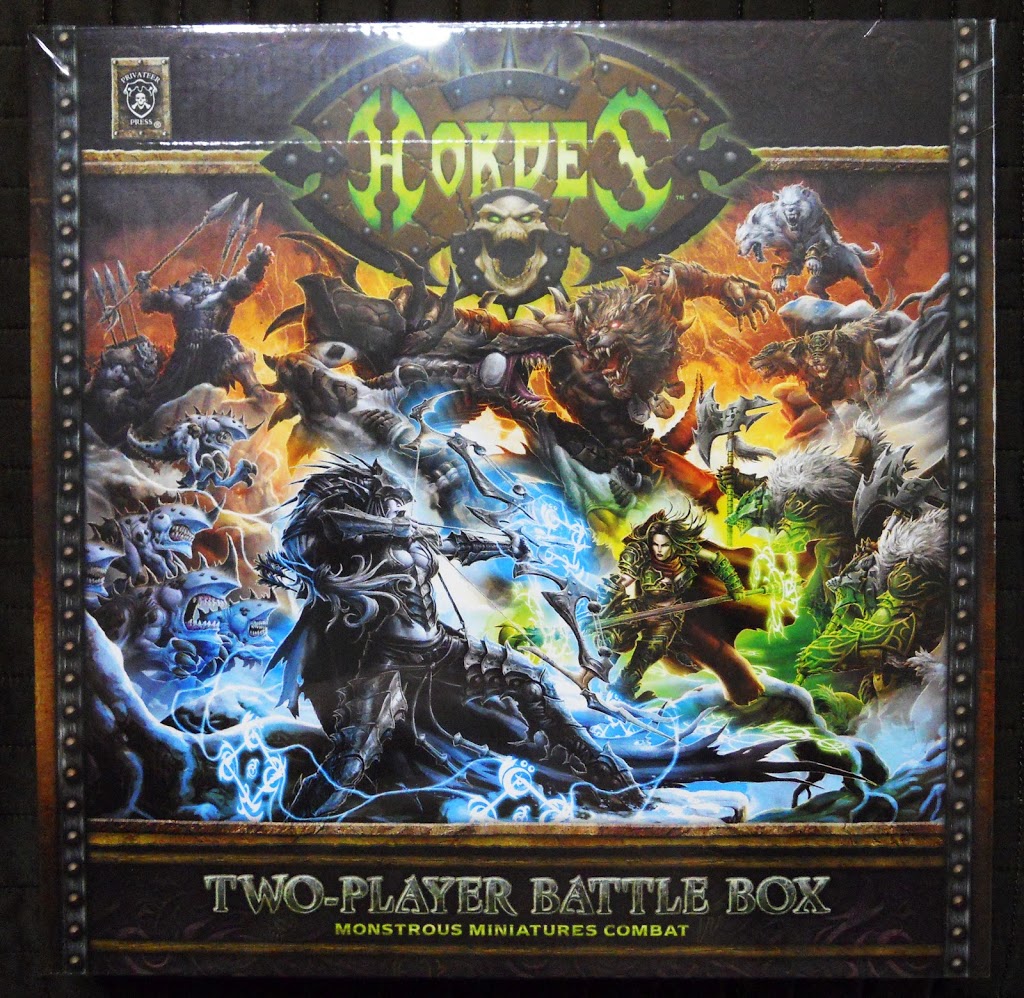 Nearly a year after the release of the Warmachine Two Player Battle Box, prospective Hordes players finally have their own product to look forward to. Like its predecessor, the Hordes Two Player Battlebox contains enough models to give a couple of new players a nice start in the game.  The factions this time around are the Circle of Orboros, and the Legion of Everblight.  While the Legion of Everblight comes with a Battlegroup identical to the one in the faction’s 1-player starter, the Circle player will get a Winter Argus instead of a second generic Argus.  Both players will also get a unit of heavy infantry.  While many Hordes players will already be familiar with the Legion Warspears found here, the Circle Skinwalkers within have previously only been available in metal.  This starter set is a fantastic deal, coming with $190 worth of miniatures.  And that’s only if you value the Circle Battlegroup at $50 and the Skinwalkers at their anticipated plastic unit release price of $45; right now a full unit will set you back $74. Then of course there’s all the printed material, and the 4 dice (not shown). It’s hard to put a value on the little rulebook.  Its a tiny copy of the larger version that is sold separately, but with the model entries absent.  As you can see its fully illustrated, and provides useful diagrams and photographs of gameplay.

And in the spirit of giving the player absolutely everything they could need to play, the Introduction guide also provides the you with cut-out templates and terrain.  Just don’t go hacking them up until you read the faction guides on the reverse side. There you will find an explanation of what the various forces are about, and why they’re fighting. The Legion of Everblight Battlebox has already been shown on BoLS here.  Check out that link for pictures of that. On the other hand, the Warspears, while not a new release, may be unfamiliar to some of you.  Here is a quick look at them.  I’ve always thought they were one of the coolest looking Everblight units. Check out some of the detail in this close-up. Since the Circle starter box was already shown in the same article as the Legion one, I won’t be showing it again either.  But I will show some pictures of the winter Argus.  Unsurprisingly it’s the same body as the standard Argus, but with heads that look more feral and wolf-like than those found on its counterpart. Last for the starter box we have the new plastic versions of the Skinwalkers. These were definitely the part I was the most curious about.  The unit seems to have made the transition to plastic in pretty good shape.  The detail is good but it’s accompanied by some mold lines that will have to be cleaned. Here’s the leader.  The plugs in his body held him together well enough to get him to pose for this shot without any glue. One of the two trooper heads.  It looked cool enough that I decided I had to get a shot of it. This set of legs should give you a good idea of the high level of detail  on these guys. Now on to our next product.  Here’s the new Storm Troll. Inside the box is the usual card and bag of parts. And here’s our troll. I love the face.  Just gotta clean off that mold line. Here’s a closer look at the fist. Like the Skinwalker leader above, the pegs on this model are substantial enough to hold in place for a picture. And here’s a look at the back so you can get a closer look at all those strange glyphs.

~ What do you think of the new Two Player Battlebox?  Is it enough to sway anyone to pick up Hordes… or maybe a new Hordes faction?  And are any of you Trollblood players looking forward to finally getting your hands on a Storm Troll?