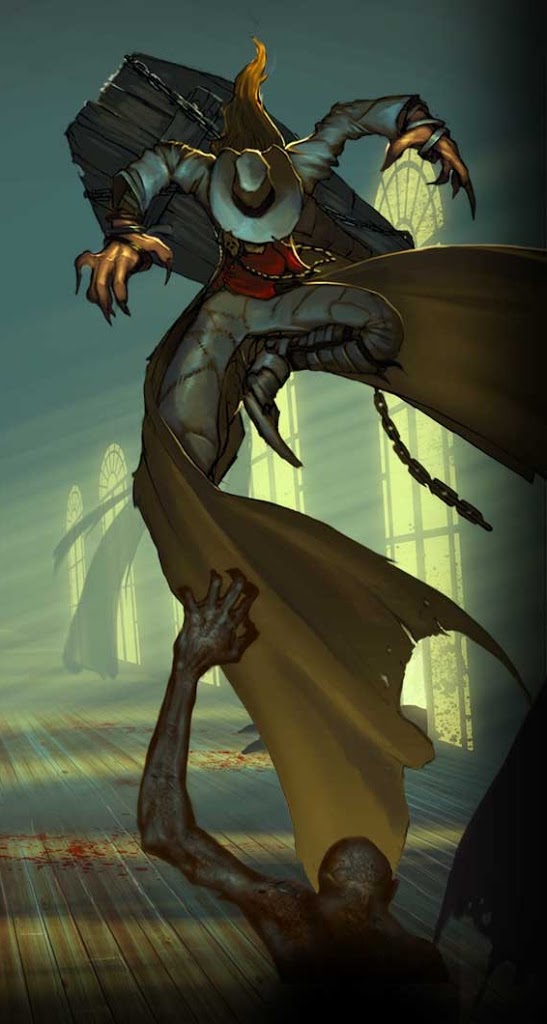 Hello everyone and welcome to Part 5 of the Malifaux 101 series,  here we will look at the companions to the Strategies in the Schemes.

In the game you generally get to choose two schemes, however in the larger brawl games you get to choose three, there is also the option to take less schemes and you gain 2 soulstones for each scheme you do not take, this however means you have 1 or 2 less potential Victory Points for each scheme you do not take.  Also for many schemes Insignificant models do not count as being in play.

We will firstly look at just the General Schemes, there are also Faction and Character specific schemes however we will look at those in another Malifaux 101 once my copy of Storm of Shadows arrives so I can look at the Ten Thunders Schemes.

In this scheme you note an opposing Master or Henchman, if they are out of play at the end of the game you get the VPs.

This is the opposite to Assassinate, you note one of your own Masters or Henchmen and if they are in play at the end of the game you get the VPs. This is always good if your opponent has chosen assassinate as it gives a potential 4VP swing in your favour (-2VP from the opponent and +2VP to you)

This scheme is good for fast, numerous crews as the objective here is to have more friendly models in your opponents deployment zone at the end of the game than they do.

This is one of the more interesting schemes, here you have to declare a characteristic such as Construct, Undead or Guardsman which at least 3 of your opponents models share, the iobjective here is to have no opposing models with that characteristic in play at the end of the game.

Eye for an Eye

This is a scheme that benefits a more tactical and evasive style of play. Here you get VPs if the number of models you have is the same or is +/-1 different at the end of the game, I have seen this played two ways either through not engaging with the opponent if you already have the required margin and if you have a strategy and other schemes that don’t require you to engage the enemy, or by going to kill all of the enemy then culling your own crew with ranged and melee attacks and abilities like Drain Souls.

This is another very tactical scheme, here you note a non-master model in your own crew, if they are killed or sacrificed by the opposing Master you get the VP. I find this useful if ive got a fast minion like a Watcher or a key offensive minion and I know the opposing master will want to make them a priority target.

This is an opposite to Frame for Murder, here you note one of your opponents Minion’s and you have to kill them with a Non-Master minion of your own to get the VPs, this is one to be wary of as your opponent could always kill or sacrifice his own model to deny VPs.

This is the opposite to Breakthrough, here you need to keep the enemy out of your own deployment zone, if there are no enemy models in there at the end of the game you get thye VPs.

This is a very popular scheme, here you have to kill the opposing minion with the highest soulstone cost, if they are kiled by one ogf your own models you get the VP.

This is a terrain orientated scheme, you need to nominate a terrain piece completely on your opponents half of the table. You have to have one of your own models in base contact withthe terrain piece at the end of the game to get the VPs.

And finally this uses a different VP system as this must be announced, your models have to take a (1) Interact action when engaged in melee range with the opponents master, you then have to win a Wp to Wp duel with the master, if you are successful you get 1 VP for stealing the relic, if the model that stole the relic is still in play at the end of the game you get the full 2VP. This is a tough one as you have to get there, pass the duel and survive for the full VP. I wouldnt recommend it against melee heavy or high Wp masters as you will struggle to get the full VP.