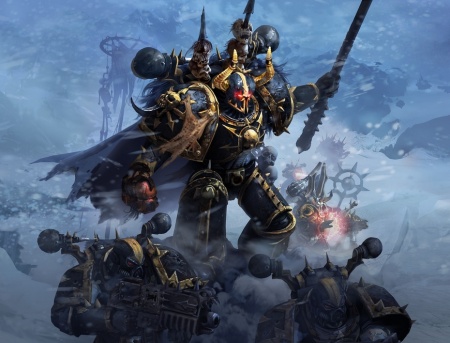 Now that that’s out of the way, it’s time to check out some of the new stuff.

First, I’ll talk about the new Dreadnought aka Helbrute.  He’s not bad.  The first thing you’ll notice from the Crazed special rule is that Phil Kelly removed virtually all downsides to him killing your own units.  No one liked when Fire Frenzy would blow up your Land Raider, and it makes more sense to have him shooting twice at your opponents instead!  The Mutilator warpy close-combat Obliterators are pretty cool, but with a price tag of over a Space Marine Attack Bike each, I’m not so sure.  I think it’s a little bit of a fail on GW’s part because if they wanted to sell new models, they should of made them amazing.  Sadly, no grenades, expensive marks and the heavy price tag will probably be the death of them even before they hit the field.  So what about the Warp Talons?  They’re OK, but I’ll probably rate them the same as Vanguard Veterans.  Maybe a little better because they have 5+ invuls due to Daemon (and thus also have Fear), and come stock with Shreding Lightning Claws.  The fact that they can be marked makes it cool, but then you’re looking at Vanguard Veteran prices.  The one thing that really stands out about them is that when they come in, they Blind everyone within 6″ of their drop zone.  That means if you thread the needle at the right time, it can be devastating for your opponents next turn as they’re technically combat ineffective.  This, however, depends on how reliable your opponents are at making their Initiative tests.  Unfortunately, more chances than not, most people will pass just fine.

I’m not sure what to say about the Helldrake to be honest.  I loathe the model so I’ll probably never own one, but I can see how it can be good.  For 170 points, it comes with Daemonic Possession and a Hades Autocannon.  The one thing that really stands out is that it’s a Daemon so it enjoys a 5+ invul, comes with AV12/12/10 and 3 HP, but has the It Will Not Die USR.  Being a Flyer, this makes it quite a bitch to kill when you math it all out.  I personally would just take it with the Baleflamer because you can take it for free because it’s a S6 AP3 Torrent, Soul Blaze template that will kill MEQ like crazy.  As if you need more ways to kill loyalists right?  Oh, and before I forget, the Heldrake has something called Meteroic Descent.  This allows him to Vector Strike while Zooming dealing S7 hits.  Not bad.  That’s fine and dandy, but most people around my neck of the woods are talking about the metal dogbeasts:  The Forgefiend and Maulerfield.  One is geared towards CC and the other delivers respectable long-range firepower.  The Forgefield is capable of laying down 3x S8 AP2 Get Hot Blast templates on someone like a pseudo Executioner, or it can sit back and unleash 8 S8 AP4 Hades Autocannon shots since it has two of them.  He’s only BS3, but statistically, your range to inflict more damage can be higher when compared to a GK Rifleman.  The Maulerfiend, on the other hand, has Magma Cutters (that deals with armor) and two Power Fists to get all up in the enemy’s face.  You can also upgrade him with Lasher Tendrils to decrease your enemies’ attacks.  Since the Maulerfiend has a special rule that allows it to move 12″ ignoring terrain, it can surprisingly move up the field very quickly and charge targets from a very respectable distance.  Both metal doggies have Daemon, Fleet and It Will Not Die, so it’s going to be pretty annoying to with when you start rolling those 5+s.

I think it’s time to wrap this up.  Let me finish by saying that a lot of the bread and butter units got a huge facelift.  Havocs are now as cheap as standard CSM, can take marks for the same cost, and have much cheaper heavy weapons.  Oh, and they’re also the first Dev unit in the game that can take Skyfire Missiles (although you have to pay extra).  Chosen are still there and are still great, although they lost their ability to Infiltrate.  I say they’re great because they can still take a ton of special weapons and their price is very attractive.  Possessed are good, Raptors are cheaper (comes with Fear!), Bikers are fantastic, and the Spawn is cheaper, and better.  Basically, everything got cheaper and better, and full of customization options like marks, veterancy and cool little chaos gifts.  The main one from that list to look after is the Bikers, man.  To put it into perspective, you can get 3 bikes with 2 Meltaguns for under a hundred points.  Then, you can add up to 7 more bikes for a measly 20ppm.  And yes, you can mark them and give them Veterans of the Long War as well.  If I didn’t hate bike models so much (long story), I would take a huge unit of 7 Nurgle Bikers (T6!!!) with 2x Meltaguns and a Fist and call it a day.

Vehicle wise, everything stayed the same, but got cheaper.  The Predator Annhilator is also cheaper than their loyalist counterparts.  Sadly, the Chaos Land Raider can still only take 10 max models, and only sport one variant, but the army-wide points reduction sure makes up for it.  I guess the only loser here is the Defiler as it got more expensive, but it gained the same properties of the other Daemon-machines so its hard to say if its a bad buy or not.  It was probably too cheap last book anyway.

There are some things in the book that bother me though.  I already shared some of my complaints above, but I’ll go over some of the new ones.  The first is the Chaos Icons.  The reason why I never brought Icons up before is the fact that they’re still given to one model to hold.  If that one guy dies.. and that’s really freaking easy with 6s to snipe, Focus Fire and all that chaos that goes on the battlefield, the entire unit loses the Icons abilities.  It doesn’t matter if you pay a big expensive Icon of FNP on your Slaaneshi units (yes, Slaanesh, not Nurgle), you lose it of your model gets picked out.  For this reason alone, I will never take a Chaos Icon.  My second complaint is the Chaos Artefacts that you can pick from.  I really liked how Daemon Weapons worked in the last book where different marks gave you different effects, but now you have Chaos Artifacts kinda like how 8th Ed. Warhammer Fantasy books have 8 or so unique items.  One part of me is excited because this can possibly mean more unique flavorful items for newer books to come, but the other part is sad that I can’t take a Blissgiver anymore.  Some of you will be happy with the new unique weapons though, although I think I’ll probably just take Abaddon if I needed something more badass.  On the plus side, Daemon Princes can run around with them, so that’s pretty cool.

I guess the new Chaos Artifacts have to do, I can’t go into too much detail, but my eye is set on two in particular:  The Dimensional Key and Burning Brand of Skalathrax.  When I first read the Dimensional Key I thought it was a misprint, but apparently, when the bearer kills an enemy model in an assault, the key unlocks.  From then on, all enemy models within 12″ of the keybearer treat all terrain as both Difficult and Dangerous, this includes attempts to charge as well.  On top of that, anyone coming in from DS near 12″ of the key don’t scatter.  Sounds really good does it?  It does to me!  As for the Burning Brand, it’s basically a S4 AP3 Flamer with Torrent and Soul Blaze.  Yum.

My last complaint is probably something that all Legion players share, and that’s there’s not enough Legion representation.  You know what?  That’s what Horus Heresy is for.  Legions are clearly extinct in the new book although they did give you some new units.  Cultists are for the Alpha Legion players, Dark Apostles for Word Bearers, Warpsmiths for Iron Warriors, and Warp Talons are for the Night Lords.  That’s great and all, but I think we can at least do something with the Sacred numbers.  If Thousand Sons can take a free upgrade to make their Aspiring Champion a Sorcerer for every 9 they would take, I bet good money that they’ll take that.  At least give the Noise Marines the ability to take a Blastmaster at 6!  You know, small things like that can make a big difference.

But hey, you know what?  Who am I kidding?  I think the book is great.  I rate it a solid 8/10 in terms of Internal Balance, External Balance, Fluff and Playability.  There’s tons of great options that you can pursue; from keeping everything cheap and spamming the hell out of cultists and normal marines, or you can go quality with full marks, icons and chaos gifts.  The point is:  You can do whatever you please and you will probably still field a fun, viable army for many years to come.  This is the hallmark of a good book, a keeper, a timesake.  Players need something that can fiddle around with for the next couple of years and I think they will be very pleased with this one.  When Phil Kelly wrote the Space Wolves codex, I prayed to the Dark Gods that one day, all marine books will be like that.  A hell of a good way to start a new edition I’d say.

Have at it everybody!