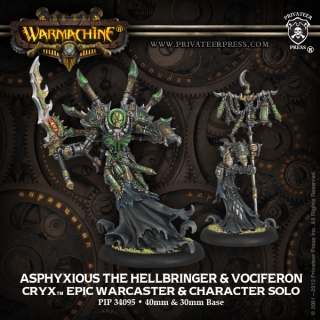 Recently coming off his high from winning the Alamo Warmachine Masters, I asked SpiderBite to review the lastest caster addition to Cryx. The reason I mention his latest win is so you the audience know he’s not some scrub off the street we asked to write for us 🙂

My first impressions of Asphyxious were of disappointment and sadness. Who is this guy?!? No clouds, no Parasite. This is no Asphyxious!! Putting his name aside and just referring to him as the Hellbringer got me around that mental roadblock. Upon playing him for thirty some games throughout the past month, I honestly really enjoy our newest warcaster. Against Hordes armies in particular, he can be brutally devastating.

He himself has changed slightly. Still on a medium base, he has buffed up and hits a touch harder with his newly reforged weapon because of it. Blood Boon is great when you get Asphy3 into the mix, conveniently you also have your own personal arc-node to take advantage of the free spell. Hex Blast and Bone Shaker tend to be the best spells for this nifty ability.

Rites of Shadow is initially a lackluster feat. In actual game-play, its actually quite effective! Obviously, Hordes will be hit hardest by this as they pay every time they force their beasts. The minor heal should never be underestimated either! The little drips of health Asphy3 can glean have kept him just in the game long enough to hit back. . . . with a bucket of focus. The biggest thing to remember about your feat is that if you opponent does not let you have any souls, he’s probably seriously gimped his turn as well.

Ashen Veil: The only time I’d cast this on a single model is to bring Asphy3 up to a DEF17, which has saved me a few times, or Erebus to take advantage of Poltergeist. Aside from that, any of our units will easily benefit from the concealment. My favorite units to use this on are Blackbanes and Mechanithralls. Remember, the 2” effect does not mean you have to be in melee. It’s a straight-up 2” bubble of -2 to any attack rolls made by living models. Think about it.

Bone Shaker: I love making my opponents models kill each other! Who doesn’t though? This is also useful after feat turn, if you can get an arcnode in position. Boosted 12’s. Boosted 12s.

Carnage: Mini Dark Guidance. The target needs to be within Asphy3’s CTRL, so keep that in mind. +2 MAT helps our MAT 5/6 infantry to hit that sweet spot of MAT7/8 and gives just enough edge to not require boosting on our warjacks.

Hex Blast: Okay, ‘certain factions’ who already have this don’t like it quite so much as I do. It’s another option for stripping upkeeps! Oh, and lets add something Cryx doesn’t have, but could really use: stripping animi! So very very useful against those cheaty Hordes armies with their warbeasts. Grrr.

Mobility: Faster, better battlegroup! This also affects Vociferon. Give this to a pair of Seethers and watch them wreck house.

Scything Touch: A nice damage buff, bringing our warjacks and infantry to being able to seriously wreck house.

Vociferon:This cute little guy is Asphy3’s personal companion. Arcane extension can give you a bit more wiggle room with your ‘jacks, if Asphy3’s 14” CTRL area isn’t enough for you. He is attached to Asphy3 so no Skarlock, but free arcnode! Soul Collector and Ghost Shield helps him be a bit more survivable in order to pull off Death Harvest. Trying for Death Harvest will get your arc node killed. Just sayin’.
Ochestrations of Annihilation:Asphy3’s Tier doesn’t allow Banes, or Satyxis but is still brings the infantry swarm madness! Free necrotechs are a huge plus. Starting models with a corpse/soul token is an amazing edge, as is the extra deployment. My absolute favorite bonus though is absolutely the Advance Deploy Pistol Wraiths.
Random babbling:
Overall, Asphy3 feels like he wants to run warjacks, but doesn’t have the focus for it. The simplest answer for this I found? Seethers. A pair of Seethers with Scything touch cycled between them destroys whatever’s in their way, and one of them will benefit from Mobility as well. For infantry, I’m a huge fan of both flavors of Satyxis with him. They both benefit from Ashen Veil and Scything Touch so very well. I would strongly encourage anyone to play Asphy3. While not being as ‘competitive’ as some of our other casters, Asphy3 is a great addition to the Cryx arsenal. With his playstyle of buffs > debuffs and myriad selection of spells, Asphy3 potentially has the answer to everything.