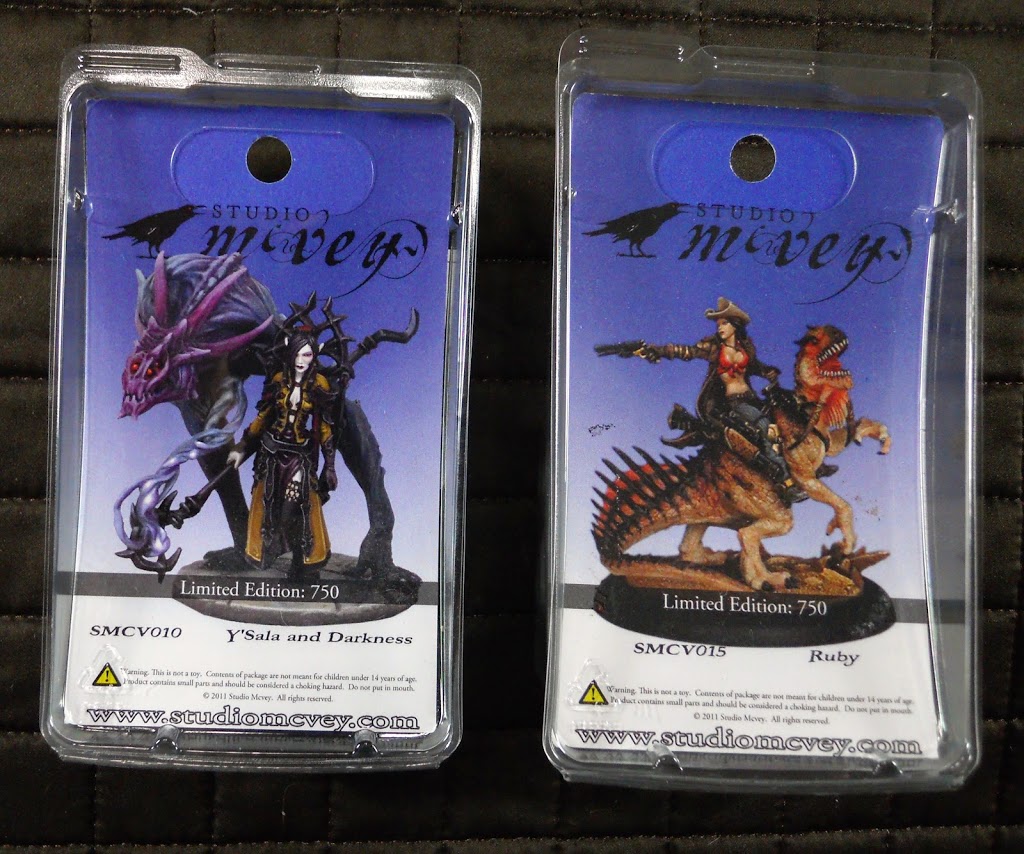 Studio McVey made news recently, breaking records with the Kickstarter campaign for their upcoming Sedition Wars: Battle for Alabaster miniature/boardgame. While waiting patiently for my Biohazard pledge to arrive, it occurred to me that now might be a good time to do an unboxing article for a couple of Studio McVey products I already own.

After all, Sedition Wars is hardly the company’s sole offering.  When they launched their minis line with the Raven Priest in 2009, their sole focus was on high quality limited edition resins like the ones I’ll be showing.

But before I get to pictures, some background.  Mike and Ali McVey have been a big part of the miniatures hobby for quite sometime now.  Mike painted some of the very first Eldar Aspect Warriors back in 1990 and literally wrote the book on painting 40k miniatures in 1994. A few years later he helped start up a brand new little game called Warmachine as the Miniatures director, and sculpted some of the game’s most iconic figures such as Karchev and Behemoth.  Ali McVey painted quite a few of the studio miniatures for both Warmachine and Hordes, and continues to do freelance painting work for numerous minis companies.  So with that little history lesson out of the way, let’s see what the company is offering. Here’s our first look at the minis.  Both of them carry a price tag of $39.99 or £24.99, which as it turns out is pretty much on par with highly detailed resin cavalry models offered by other companies. Each comes with its own certificate of authenticity signed by Mike. Let’s start with Y’Salah and Darkness.  While it looks like this particular model has sold out since I purchased it a few months ago, it still does a great job showing off the quality of Studio Mcvey’s miniatures. As you can see it’s a very good resin cast.  The mold lines are thin and minimal, and the staff is almost perfectly straight.  The detail captured in the sculpt is exquisite. Check out all those delicate ridges, as well as the buckles and clasps, and the lacy parts on the stocking.  The cloth squares in the background are an inch tall, so you can see she’s definitely in the heroic scale category. Here’s a close-up of the back. Our first look at the monster, as well as the custom base its supplied with. I love the rippling smoke effect on some of the musculature. And the head of the creature is very inspired. Now it’s on to Ruby, who as of this writing is still available both from Studio McVey itself, and from Coolminiornot which is where I picked up both of these guys. What’s not to love about a cowgirl with her very own dinosaur? Here’s a close-up of the beast, every millimeter of its body covered in scales. And here are the tail and arms.

The tiny parts that don’t fit anywhere else. And here’s the bottom of her coat.

~ So I guess I’ll start the discussion by asking if anyone else has picked up any Studio McVey stuff.  If not, is this the first you’ve heard about the company?  Finally are you willing to pick up nice models like these just to collect and paint, or will you only shell out the cash for minis you plan on gaming with?