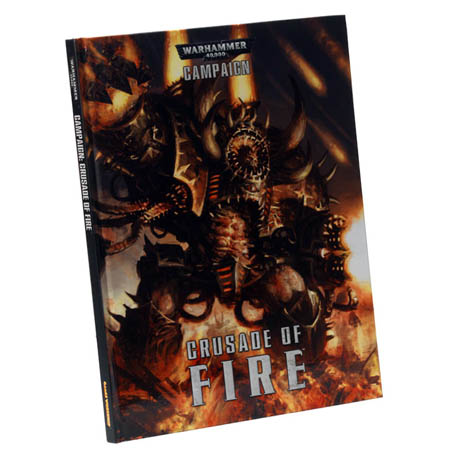 Want to grab a 6th Edition Warhammer 40,000 campaign book out of nowhere?  Games Workshop has something to show you:

Crusade of Fire is a campaign system for Warhammer 40,000 that enables you to join the campaign to control the Corvus Sub-sector. Whether you choose to join the Crusade of Fire itself, the foul Servants of Ruin or the bloodthirsty Prophets of War, the fate of the sub-sector lies in your hands.

This 96-page, full-colour hardcover book features exclusive artwork and a host of dynamic new rules. As well as the campaign system itself, the book contains rules that can be used in any Warhammer 40,000 game, from massive multi-player scenarios fought in low-gravity environments or in bunkers deep below the ground, to expanded rules for Flyers. It also features rules for playing games in the gladiatorial arenas of Commorragh as well as for fighting battles on the surface of a Daemon World.

Crusade of Fire also features the story of nine hobbyists as they play through the campaign, including detailed battle reports, fantastic army showcases and turn-by-turn accounts of their conquests.

Congrats to the company for managing to keep this one completely under wraps. You’ll note that ususual totling it has along the spine – which makes me think more of these are coming.

I can certainly see several of those envoronmental charts and expanded rules come in handy for both narrative-minded play groups and tournament organizers looking to spice up missions.

Good Job GW!  More conversation in the Lounge here (along with more pics of the Wall of Martyrs).