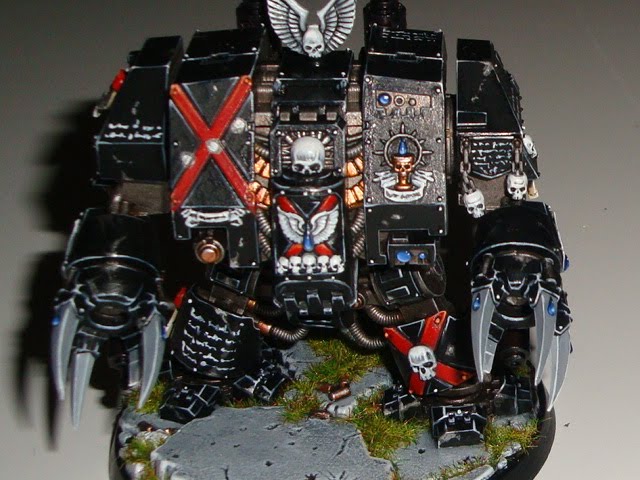 This evening I have put together an interview with Gabe Dobkin who won the Player’s Choice award this year taking the top spot for Best Army by a land slide.

Gabe is no stranger to the podium and has won many awards at various GTs as both a general and painter. Last year Gabe won the award for Best Overall at NOVA with his beautiful and highly converted Cobra themed Imperial Guard army.

This year Gabe went 4W-2L with his beautiful Blood Angels Death Company army which was quite a feat seeing he only had one scoring unit and four out of six missions featured objectives as the primary win condition. I met Gabe several years ago when I first moved to Florida at the Necronomicon GT in Orlando. He is a great guy and highly respected throughout the state. Gabe has a knack for developing very unique armies that do quite well in play and that is one of his traits I admire most! Gabe has been kind enough to share some pictures of his Death Company army with us… w00t !!

So let’s go ahead and get started now that the introduction is over. A1. I am traditionally a xenos player and tend to be drawn away from so-called “cookie cutter” MEQ builds. I was a big fan of “Null Deployment” in 5th edition and have always enjoyed coming up with out of the ordinary builds and tactics. When I read the Blood Angels Codex, I was blown away by the variety of available themes within the army and intrigued by the potential of the Descent of Angels USR. It seemed like I could apply xenos tactics to an MEQ army. It felt like Eldar Marines! As a painter, I loved the Sanguinary Guard models. After NOVA 2011, I set about feverishly assembling and painting a Dante led, “Null Deployment” DoA army of Sanguinary Guard and Assault Marines. When 6th Edition hit, I was nearly finished with the army only to discover it was no longer legal! At that point, NOVA 2012 was only a couple months out. I looked at the units I had painted and really had no idea what to do or which direction to go. I spent a couple weeks unsuccessfully trying to adapt the list and the units I had already painted into something viable for 6th edition. I had completed a Death Company squad with bolters and a Death Company Dreadnought both with Drop Pods as part of my DoA army (the only non DoA units in the list!). A day or two after giving up on creating a 6th edition list for the Blood Angels, I just had an epiphany of swapping Dante for Astorath and bringing an all Death Company themed list. I sort of stumbled into the idea as a last resort, but it really took off from there as I gained inspiration and motivation for the project. I also knew the points cost of jump pack equipped DC was so prohibitive that it would allow me to get up to 2k with a limited number of models, which is important as I paint slowly.

A2. The list I ran at BeakyCon 2 is listed below. As for tactics, I basically try to kill everything with a particular focus on opposing scoring units. I added the one assault squad, which I attach Astorath and the Sanguinary Priest to, in order to potentially hold one objective. If I can limit my opponent to one objective, I am now playing for KPs. DC Tycho embarked on the Stormraven was supposed to be a late game “ace-in-the-hole” denial unit. A3. I hadn’t actually gotten a single practice game in with the army prior to BeakyCon 2, so I think I was pretty worried about all opponents!!

If I had to choose one prior to the tournament, I would have to say Grey Knights are always going to be a threat to Blood Angels as they are basically just better equipped Marines. The biggest problem is any guise of flyer spam. With the exception of the Stormraven, my entire army basically has 12″ range and nothing to hit zooming flyers or swooping monstrous creatures.

I did face an Ork/IG list that featured 3 Fighter Ace Waagh DakkaJets along with a pair of Vendettas and 36 Lootas. It was quite the game of cat and mouse as I basically spent the entire game hiding in ruins and trying to keep a few things alive. Amazingly, that worked like a charm and I was able to win objectives at the end! I also fought a Daemon Army with 4 flying monstrous creatures, which I just had no real answer to. A4. I think DC Tycho was not an optimal use of 175 points. As the Stormraven tends to eventually get shot down, Tycho has a 50/50 shot at being instant-deathed in the crash! Even when he lives, he ends up being well out of position to do anything. The Hurricane Bolters were not particularly useful for 30 points. I definitely think dropping those two things in exchange for a second Stormraven is going to be happening in the immediate future.

A5. I think my favorite game at BeakyCon 2 was against Chris Winans who had the above mentioned Ork/IG list that featured 3 DakkaJets along with a pair of Vendettas, 36 Lootas behind an Aegis Line, 2 mobs of 30 Shoota Boyz led by a BigMek, etc. I literally looked at his army and thought that there was absolutely no way for me to beat it. I had nothing to deal with 5 flyers and not only did he out number me like 4 or 5 to 1, but he had massive amounts of ranged shooting. The mission was objectives and there were 4 on the table. The table was a city fight board featuring several large LoS blocking buildings.

This was the only game where I combat squaded the Assault Squad. My saving grace was rolling a “1” for the Warlord Trait Conqueror of Cities which gave my entire army stealth and move through cover in the ruins! I gave him first turn and stuck the combat squad of 5 normal assault marines in regular reserve. I spent the entire game literally cowering in ruins and attempting to deny him LoS to my units. I used my Drop Pod Death Company to box in his Shoota Boyz Mobz and keep them entertained. The Stormraven came in and dropped a DC Dread and Tycho in to the same area to keep those two gigantic units occupied and boxed in his deployment zone. It was a pretty insane game! I didn’t reveal my Jump Pack Lemartes-led Death Company unit until the bottom of turn 5. They were able to jump out and charge into his Loota brigades, killing many and contesting the objective in his deployment zone. On the bottom of the 6th turn, Astorath, the Priest, and the Sergeant of the other Assault Combat Squad (which was all that remained) were able to jump out and capture the objective in my deployment zone. The last 2 marines from the other combat squad then jumped out and captured an objective in no man’s land. My Death Dread that had been delivered in hiding behind a large ruin in his Drop Pod earlier in the game was able to move out and destroy enough of the IG Vet Squad that was holding the final objective to give me the win 2-0!

It really was a thinking game, quite silly, and a very non-aggressive way to run psychopathic Death Company!

Q6. What is your next 40k project you have planned?

A6. I am going to tweak the Death Company by adding the second Stormraven and maybe one or two other bits. I am also in the process of finishing up the new additions to my existing Necron army as an update of sorts. Both of these projects will be finished here in 2012. Next on the agenda is the giant stack of unopened Dark Eldar I have been hoarding since that codex released! 2013 will be the year of the Dark Eldar! Q7. How did you like the overall system and rules this year? Do you have any suggestions for improvement?

A7. I really had a great series of games and I enjoyed BeakyCon 2. It was great having a large event here in Florida. My main suggestion for improvement would be posting the scores at the end of each round along with table assignments. It would keep the judges from having to walk around the room shouting them out, which was difficult to hear at times, and would also of course let players know how they are doing in the rankings.

Q8. Feel free now to discuss anything you wish that I haven’t covered above.

A8. I would like to drop a shameless plug in here that…

I am entertaining the idea of selling my Cobra-themed Imperial Guard army which has won quite a lot of awards and notoriety. In different iterations it has won Best Painted at the NOVA Open 2011, Coastal Assault 2012, and Best Army at the Necronomicon. These are all very large events.

The army is huge and far larger than the 2k army featured around the internet. This army is truly one of a kind and painted to the highest standard.

I do not want to part with it and will never undertake another project quite like it. Times are hard and if anyone out there may be interested, please contact me at:

I guarantee you will not be able to purchase an army of this quality on eBay. The attention to detail on every model is far superior to pro-painted armies on eBay that have asking prices of $3500 and up. My asking price is $5000 obo. That’s it for now. A big congratulations to Gabe !!