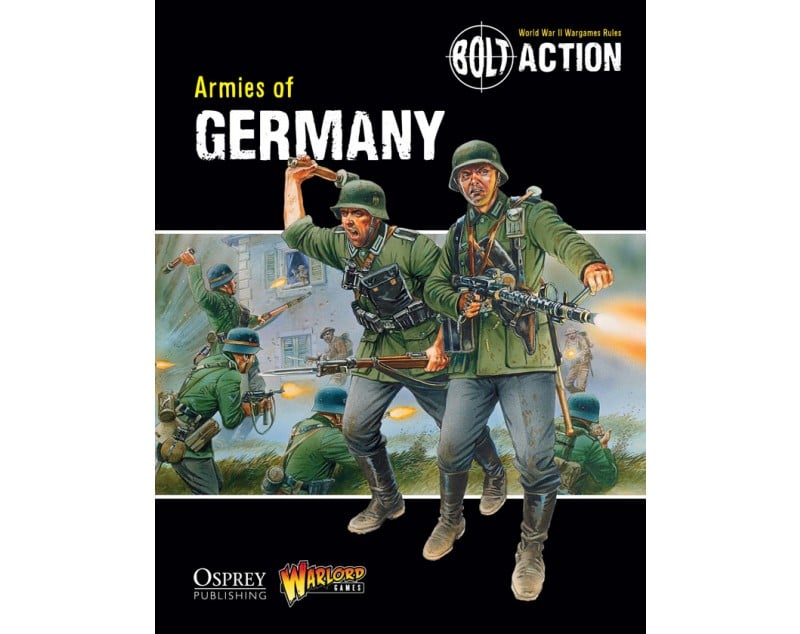 After the excellent Bolt Action rulebook everybody was waiting to see the first supplement and how it will expand the game. Now Armies of Germany is here, not just more than doubling the number of available units but also introducing the highly anticipated Theater Selector.
Overview
Armies of Germany is the first supplement for Bolt Action. It comes as a 96 pages softcover in the typical format of all Osprey publications, which is slightly smaller than the hardcover rulebook.

Again, the over-all quality of the book is impressive and as the rulebook it features plenty of pictures both of Warlord Games’ miniatures as well as illustrations from various Osprey books. Sadly many of them are the same as in the Bolt Action book, but there are nine full-page pictures of soldiers from different units and eras (if you ever flipped through any Osprey book you will know what I mean). The book lacks an index but is well organized and has a useful contents list in the front. Throughout the book you can find boxes with short texts with further background information or interesting anecdotes like the first Tiger kill by the Allies.
Sadly the book suffers from quite a number of typos, especially in german terms. Slightly irritating is the mentioning of artist, source and copyright for every picture taken from an Osprey book.  I would prefer this all to be put into a single index at the end of the book.
The errata of the rulebook is fully incorporated, for example the medium autocannon is always referred to as heavy autocannon now.
Introduction
Armies of Germany starts with a short kind of designer’s note explaining that the list is by far not complete and, to paraphrase the more polite formulation, that players should not bitch around if an opponent wants to field something not covered in the book like a captured T-34.
After that we have a very brief, six page overview of the course of WWII from the german point of view. This part is pretty superficial and leaves out almost all of the politics and ideology. For example, the other nations of the Axis are not mentioned at all. The Army List
This section starts with a short explanation of the reinforced platoon and the Theater Selector. The army list increases the number of units from 50 in the rulebook to 108. Both special rules (Hitler’s Buzzsaw and Initiative Training) are unchanged, as well as the complete Headquarters section of the army list.
The infantry section now contains 16 different squad options. Most derive from splitting up entries from the rulebook, for example the generic Wehrmacht squad is now divided into five different Heer and Kriegsmarine (Navy) entries. Waffen-SS and Paratroopers have been split into early war and late war versions, Volkssturm and Osttruppen are now separate entries. New are Hitler Youth, a green squad that can upgrade like Volksgrenadiere but becoming fanatic instead of veterans, Heer Pioneers able to take a flamethrower instead of a machine gun and the Kriegsmarine squad drafted from sailors without proper infantry training (I was surprised that this option is in but the Luftwaffe–Felddivision, a similar formation drawn from the german Air Force, is not). Many infantry squads have now the option to be mounted on bicycles, basically giving them an increased movement until they are given an order other than “run”. The Third Reich now got access to cavalry and motorcycle troops, too.
There is only one new weapon team, armed with an anti-tank rifle. Additionally the Flamethrower Team gained the option to use two one-shot weapons instead of the regular infantry flamethrower.
Artillery now includes recoilless Leichtgeschütze which are significantly smaller than other howitzers and therefore slightly more expensive, and the (in)famous carriage mounted 150mm Nebelwerfer. There are four new AA guns available. One of them is the most famous artillery piece of the war, the dreaded 8,8 cm Flak 36 or Eighty-Eight. This massive wepaon is a super-heavy anti-tank gun that can fire as FlaK and can be used as a light howitzer if needed – a true german Wunderwaffe! Of course there are plenty of tanks in this book. From the humble Panzer I to the mighty Tiger II all members of the Panzerfamily are represented, most of them in more than one variant. For example, there are six (!) versions on the Panzer III, plus a flamethrower variant and two assault guns based on this design!
Tank Destroyers now include the massive Sturmtiger and Brummbär support tanks and several armed variants of halftracks and prime movers can be found here and in the SPG section, too. Some of the armored car entries in the core rulebook have been split, for example the different versions of the Sd.Kfz. 231 are now separate entries. The number of transports and tows has been doubled and now includes the iconic Kettenkrad and the amphibious Landwasserschlepper.
Most entries in this section have been rewritten and are more detailed. A nice touch is the inclusion of principal service time and numbers manufactured.
Many german tanks can now get armored skirts, denying shaped charges and anti-tank rifles the bonus for targeting the side of a vehicle. The Theater Selector
Now this is what we were waiting for. In my review of the core rulebook one of the main criticisms was that the armies are all late war Europe and lack character. With Armies of Germany a new system is introduced to chose forces for specific campaigns. The book contains 18 different sets of rules covering the entire war.

This section starts with another short introduction explaining the system. Interestingly the text refers to 17 instead of 18 selectors. Not exactly a problem, but an unnecessary oversight.
The Theater Selector is divided into 5 sections and 18 campaigns: This selection covers all major german operation during WWII with minor theatres easily covered, too (for example, the armies invading Norway, Denmark, the Netherlands and Belgium didn’t differ significantly from those attacking France).
Each Selector gives a short historical background and a modified reinforced platoon organisation table. Two of the Selectors introduce additional special rules representing the tendency of early Panther tanks to break down during the battle of Kursk and the shortage of fuel during the last weeks of the war. These are nice details and fitting and I would have appreciated to get a lot more of those to make every Theater unique.
The modified reinforced platoon organisations specify the units that can be taken for this Theater Selector and often change the restrictions. For example, almost every Theater Selector allows to take a second MG Team per platoon. Further the selector often dictates what kind of infantry squad has to be taken as mandatory choices.
Two of the Selectors differ significantly from the rest: Operation Mercury was an airborne assault and does not allow you to take any kind of vehicle or heavy guns and the Anti-Partisan Patrol uses second line equipment no longer fit for frontline duty. Impact on Gameplay
A major problem with the sequential publication of army books is always the dreaded “codex creep”. In the case of Armies of Germany this effect is negligible.  The lists of the core rulebook represent the peak of military development on each side and the majority of new units in Armies of Germany are from the early phase of the war. Therefore a generic list build using Armies of Germany can be fielded against allied forces without any issues. There are some slight advantages like full access to AA guns and vehicles or powerful new options like the flamethrower wielding Heer Pioneer squad, but those aren’t game changers. Conclusion
As the first book of a whole series, Armies of Germany is a very useful supplement for Bolt Action. The expanded army list and the Theater Selector system both contribute immensely to ironing out the main criticisms of the core rule book.
On the downside, product quality is kind of a mixed blessing. The illustrations are excellent and the texts well-written but there are just too many typos and small oversights. This doesn’t hamper the use of the book t all, but as I mentioned before, it is unnecessary and hopefully more attention will be payed to these issues in the future.
On a personal level, I oppose the necessity of the Anti-Partisan Selector. This behind the lines “combat” included the worst atrocities of WWII like revenge killings of civilians as well as the bloody work of the german Einsatzgruppen using Partisan activity as a justification for genocide. The comment that this might be an “enjoyable” scenario is almost cynical and in my humble opinion the book would be better without this option.
Another thing I missed was a hobby section. A couple of pages with instructions for painting Heer and SS-soldiers and vehicles would have been nice, especially in combination with a table describing the correct colors that should be used.
Nevertheless, Armies of Germany is a must-have for every Bolt Action player and increases the anticipation for the next books in line, Armies of the United States and Armies of Great Britain.