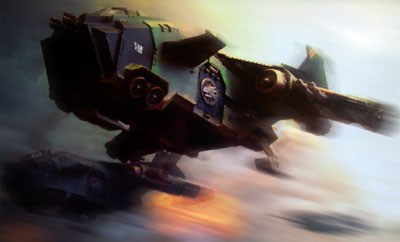 Hi everyone !! BBF here again with an editorial this week. I just had an interesting conversation yesterday with a local friend regarding the use of Forge World for competitive play. Basically I got the message there is a line drawn in the sand… You’re either pro Forge World or anti Forge World. I think this is a really bad stance to take and I’ll discuss why.

2013 is looking like the year that Forge World will finally have its big chance in the US Indy GT circuit. Lots and lots of tournament organizers (TOs) for major events have said they will allow the use of Forge World and I think it will be very interesting to see how it all plays out because the big events tend to have an effect upon the game. For example the Internet said Draigowing was crap then after Blackmoor took 2nd place at the NOVA two years ago it became on of the most popular armies in fifth edition.

PUSHBACK AND A DISCUSSION ABOUT DOUBLE FOC

Last year several TOs for major events such as the American Team Championship (ATC) and Feast of Blades (FoB) announced they would allow the use of the double Force Organization Chart (2x FOC)… There was some fierce pushback on the Internet and as far as I know all of these TOs eventually capitulated.

At first I bought into the scary arguments against the use of double FOCs… Those dead set against it argued vehemently that we would see very abusive lists such as Necrons featuring six squads of Canoptek Wraiths lead by four Destroyer Lords or Imperial Guard with six Manticores – oh my Henny Penny.

It’s important to take a step back and look at the big picture. These types of uber spammy armies are very unbalanced… Take for example the Necron army with six squads of Canoptek Wraiths – if it comes up against a Space Wolf army with two or more JotWW Rune Priests they are in for a rude surprise. If an army is not properly built to take all comers (TAC) then in a competitive multi day tournament with a well designed system these types of armies eventually fall short. A good tournament will have their system designed so that various armies have a chance to win. Using table quarters as a primary objective is one way to level the playing field and prevent flyer heavy armies from dominating. If you see a lot of the same types of armies on all the top tables then probably the system could have been better designed.

I have seen some very cool designed armies using double FOC such as Chaos Space Marines – wouldn’t it be nice to be able to field a named character such as Typhus, a Sorcerer and a Dark Apostale or Warp Smith? Another good example is the use of double FOC for Tyranids since many of their best choices are all clumped in the Elites section (e.g., Yrmgal genestealers, Hive Guard, Zoanthropes, Doom of Malan’tai, etc).

I am now pro double FOC for these very reasons. I think the very rock paper scissors nature of 40k will take care of the uber spammy armies – it is just my opinion though.

I have been told that the double FOC was designed by the game developers primarily so that older codices can still be competitive and that makes a lot of good sense to me. What we want is a level playing field and the double FOC is a big step in that direction. At the very least give it a chance first before you say no. You might be pleasantly surprised.

In regards to the inclusion of Forge World in the tournament environment there is still very much the possibility there will again be some major pushback against it just like the double FOC last year… Maybe some or even all of the TOs will end up capitulating yet again – only time will tell.

There is a lot of misinformation circulating why Forge World is bad for tournaments. The Hades Breaching Drill and Lucius Pattern assault drop pods are always the first units mentioned when people want to build a case against Forge World… These are just two units though. Should we ban the use of Forge World simply because there are two undercosted overpowered units? There are many units in 40k that are also undercosted and overpowered. To me it’s a better approach to just ban the unpopular Forge World units rather than throw the proverbial baby out with the bath water.

I have found through many discussions with a wide array of gamers that many don’t realize that Forge World now typically will categorize their units as either 40k Approved or Apocalypse. Units such as Thunderhawks and Titans were never intended for play in normal 40k. On the other hand a Contemptor dreadnaught is properly costed in my opinion.

Some people don’t even realize that Forge World is owned and operated by GW. The same people developing 40k codices sit right beside the people writing the rules for Forge World. There has been a lot of time and effort put into properly integrating Forge World 40k Approved units for sixth edition. Imperial Armor Apocalypse 2nd Edition and Imperial Armor Aeronautica are two books recently released by Forge World to help meet this goal. Forge World has also produced several PDFs to help incorporate their 40k Approved units for play in sixth edition and this particular information (i.e., PDFs) is right at your fingertips.

Some think that the inclusion of Forge World breaks the game – I often hear people say that if GW had intended for Space Wolves to have a flyer with transport capacity then they would have released one in their fifth edition codex. We shouldn’t immediately dismiss that out of hand but on the flip side who can truly say other than GW if they didn’t intend for Space Wolves to have access to the Storm Eagle or the Caetus Assault Ram? Like I said GW owns Forge World and their employees all work together – they are driven by profit.

LEVEL PLAYING FIELD AND THE IMPLEMENTATION OF FORGE WORLD

Forge World can be another means to level the playing field. Remember that not everyone has the inclination to play the newest armies released by GW with the best rules written specifically for the latest edition and some armies don’t age as well over time as others.

There is a wide range of Forge World 40k Approved units available to various armies that provide excellent defense versus the much hated flyers. Sure there are certainly some undercosted over powered Forge World units such as the two mentioned above but to me it is the responsibility of a good TO to lay down some well thought out restrictions. Sure that requires a good deal of additional work on the part of the TOs but I think it would definitely serve them very well… Otherwise I think what will happen is the tournament environment will become like the old wild west – we really don’t want that to happen either – the players need guidance from their chosen TOs so that Forge World does not break the game and it doesn’t have to either.

I think the following guidelines can help make a smooth transition for the inclusion of Forge World 40k Approved units for the game:

• First and foremost do some serious research to determine which units you will allow. It is okay to ban the use of some units. Forge World now has a category called 40k Approved – units that fall under this category are certified as okay to use in normal 40k games, not just Apocalypse. Forge World has released new books (Imperial Armor 2nd Ediion and the new Aeronautica book) that lists which units are approved for 40k. There are also PDFs available that bring older Forge World units in line with sixth edition.

• Secondly and probably most important of all require army lists that feature Forge World well in advance for review as opposed to armies that don’t. If you spot something not kosher them simply say no, it’s not allowed.

• Thirdly once this is all sorted post a list publically announcing which of the Forge World units are good to go and will be in play. That way you are catering to everyone. Players that don’t want to bring any Forge World will know what to expect and can design their armies accordingly.

•Fourth and finally require players that bring Forge World to provide a copy of the rules for these units for their opponents to review prior to the start of each game.

Over time if Forge World becomes more universally accepted then these guidelines can be relaxed. I think that some restrictions are necessary at this point in time to create a comfort level so that most everyone is okay with the use of Forge World in tournaments… Otherwise it could potentially be another disaster and you’ll have to listen to all the people that will say I told you so. I have been playing the game for a long time and I am a competitive gamer. I am just now realizing though that not everyone who travels to a big tournament is a hard core competitive gamer. There has been a trend over the past few years to design tournaments to mainly reward the more competitive players. A lot of people think that Forge World is yet another tool for the win at all costs (WAAC) mentality. Certainly it can be but then again it doesn’t have to be and it’s the responsibility of the TOs to ensure this doesn’t happen. Maintaining the current ban on the use of Forge World accomplishes that goal but in a way it’s the same type of thing as cutting off your nose to spite your face. In reality some of the the biggest opponents to Forge World are competitive gamers… If they have their way then it’s one less thing to worry about when preparing an army for a tournament.

Change happens and it’s the only thing constant in the end. I’m not here to say Forge World is intended for 40k but then again I can’t turn a blind eye to all the work that has gone towards making it more compatitble. I know there are lots of people who would enjoy using Forge World and not just because it makes their armies all that more competitive. I have played in tournaments that allow Forge World – those that were properly designed were just as much fun as any other tournament… So I know it can work.

At the very least give it a chance first before you say no. You might be pleasantly surprised.