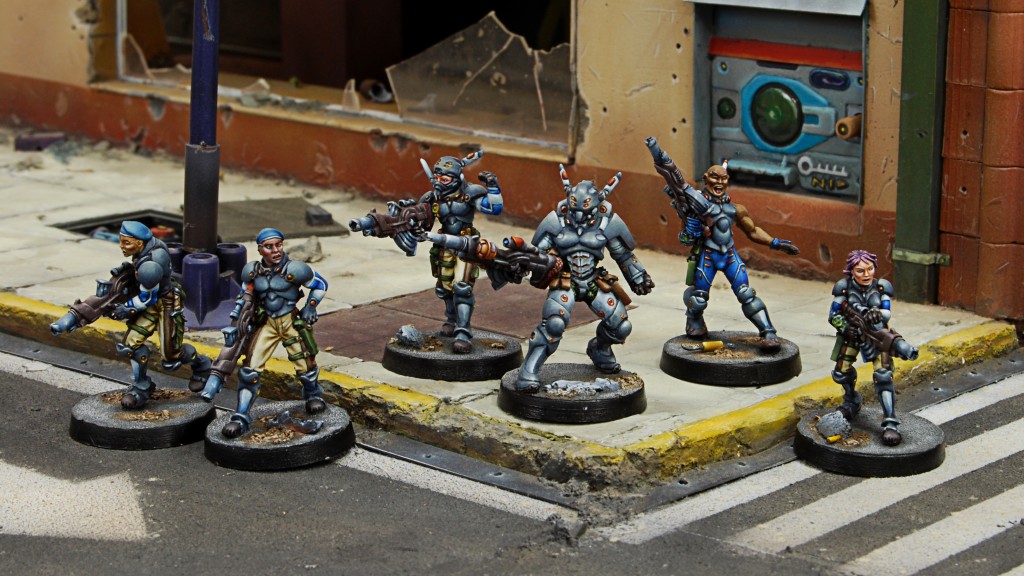 Welcome to the greatest and wealthiest nation of the Human Sphere, PanOceania!  Andyman is back and this time I will give you a closer look into the workings of the PanOceania faction from Infinity: the Game.

Call it luck, call it determination, or call it down-right-cheating, PanOceania has the distinction of being the premiere source for technology and progress throughout the Human Sphere.  Did they really earn it, or did they just step on the shoulders of giants and reaped the rewards of “finders keepers”?

After Humanity launched two ships into a wormhole everyone watched with bated breath for the results…  Disaster struck!  One ship was almost immediately lost and never heard from again (until Campaign Paradiso), and the other was given up for dead.  Several countries had invested their futures in this endeavor and with this unfortunate event they would begin a slow inevitable decline economically.  This was mostly North America, Russia, and parts of Western Europe; formerly dominent world powers.

It was up to other nations to fill the gap that was left and most of these were countries that lined the Pacific Ocean.  Australia, Indonesia, and some South American countries began to ally and form an economic conglomerate.  Soon others began to join from around the world and the world was quickly divided into two distinct factions, the PanOceania and their rivals the Yu Jing. Along with these events a new tool was developed for Humanity called Aleph and its creations and survival were heralded with the help of Pan Oceania’s top scientists. Technology and culture radically changed and by the 22nd century Humanity was connected and charging forward like never before.  Initially PanOceania lead this charge and the Yu Jing were hard pressed to catch up. Space exploration became a cheaper adventure and soon planets were colonized and claimed for the Human Sphere.  Pan Oceania lead the way in colonization…

Despite some growing pains between the various factions of Humanity, Pan Oceania holds the most territory among the colonized planets discovered in space.  This is both a blessing and a curse in the current age.  The blessing is that they hold the traditions and passions of the 21st century western world; Christianity, unlimited progress, capitalism, etc.  The curse however makes them the greatest target for everyone else.  It’s lonely on the top, and Pan Oceania knows this too well. The first Sectoral list for Pan Oceania I’ll review are the Military Orders of the Church.  With the rise in tensions between various Human factions and the arrival of two alien species, the militant orders were reopened.  Originally they were intended to protect members of the faith and holy sites but quickly their prowess saw them moved around all areas of the Pan Oceania territories.  Powered by faith and the best technology, these warriors are called upon when only the best will do.  Heavy armor, swords, and guns!  What else do you need!? Armies of the Aconteclmento
Born from an industrial world these members of the Pan Oceania community are the backbone of its industrial might.  Everyone from this world has been working in factories and mines for years and when the call of war goes out they are ready with grit and assault weapons.  Owing to the fact that their world is densely packed with factories and jungles these soldiers specialize in tactical maneuvering and shock assaults.  When a heavy assault against fortified enemy positions are required, these men and women bring the results!
Whether you choose to field a generic Pan Oceania list or you decide to travel with one of the Sectoral Lists, the technological superiority of Humanity’s greatest nation is yours for the taking.  Despite all of this however, everyone is looking to take your place and once they are through you must deal with the Combined Army.
How will you dominate the Human Sphere?!