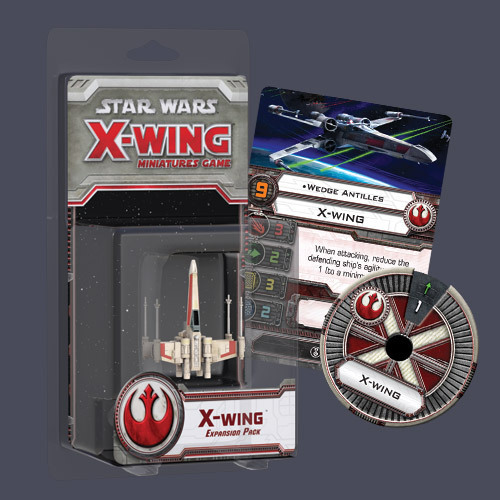 Continuing with the trend of taking a look at the ships for the X-Wing miniatures game from Fantasy Flight, today we take a look at the X-wing Fighter itself.

I’d like to start out by saying I am by no means a god among men when it comes to playing games. I am merely saying I’ve played a few more games then others and may have lucked my way through a tournament.

These tactics are for beginner players to help them better familiarize themselves with the game to help their over all play. If you’re a seasoned gamer who can come up with battle plans and strats in your sleep, these may not apply. So, now that that’s out of the way, lets begin shall we?

Biggest thing I can say in this game, numbers are your friend. The more ships you plop on the table, the better off you’ll be later. It might be tempting to take the most expensive pilot and deck him to the teeth with all those fancy weapons, but if he gets focused and killed, wheres that leave you?

Granted, yes, there are exceptions to this rule but as an all around tactic to pull from, this one is pretty useful. It just means you have more ships, and thus, more guns. More targets for your enemy to shoot at as well, but hey, better to divide the damage then have it all on one guy if possible. Since this game is based off mostly random chance over everything else, the more you can shoot the better your chances of scoring those kills. You’ll also feel better seeing you got plenty more on the table if you lose a ship or two. Now that’s not saying never take the big guys either. Their abilities are very nice and can easily turn a bad situation good. Just find that balance between the numbers and the names to help you down the road.

My suggestions as it stands with the current point list of tournaments at 100 points, Rebels should sit with 4 ships while Imperials should sit around 6 ships. That can give you 1 named guy for rebels and a few for the Imperials as they are much cheaper. Again though, just test the waters here, eventually you’ll find the play style you like and then regardless of how many ships you field, if you have fun, you have some fun. And ain’t that why we play games?

Next thing I can say is take is slow. No really, don’t go that fast in those space ships brah! A lot of people, myself included, do like to jet forward turn one to get into the action quicker. But with most tournies, you start 2 range bands out so you can go slow and still be fighting turn 1 most of the time. Yea, if both players go slow you might not have some turn 1 fun, but that’ll hopefully allow you to decided what to do next a bit better.

Also most of those missiles require a far range to work, so if things go right, that’s a good time to unload with some nasty fire power. Speaking from experience, it definitely isn’t fun to have your awesome missiles sitting around cause you made the mistake of getting to close to fast.

Another reason to go slow is if your opponent does rocket forward to meet you, you may have a good chance of pulling a nice U-turn in the second round and get free shots on their rear end without fear of retaliation. And isn’t that just nice? Won’t always go that why, but I’ve done it a few times to some usefulness and its very nice.

Final thing and my personal opinion, don’t fear the asteroids! No really, don’t be afraid to fly around them. They provide some cover and in the end depending on luck, won’t hurt you much. plus it will confuse the crap out of your opponent to see you flying around and through them.

Hope these help new players and good luck to you in your games.

~Welcome to X-Wing, enjoy your stay.

Author: Robert B
Robert is a veteran tabletop and miniatures gamer, and writer with over 20 years of experience. His specialtiesies are the worlds of Game's Workshop's Warhammer. He began writing for BoLS In 2010.
Advertisement
FFG - Fantasy Flight Games Rules Tactics X-Wing
Advertisement