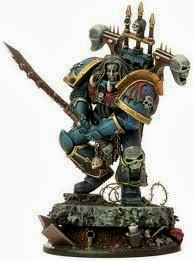 All you Salamanders, Night Lords, Word Bearers and Iron Hands – your Legion rules are here – straight from GamesdayUK!

Stand and Fight – Must pass a leadership test to make sweeping advances after winning an assault or to make a run in the shooting phase. May not voluntarily go to ground.

Rigid Tactics – An Iron Hands detatchment may not have more units with the jump infantry , bike or jetbike types than it does the infantry type. Note because of this , certain rites of war are unavailable to Iron Hand armies. Talent for Murder – If a unit with the Legiones Astartes (Night Lords) special rule outnumber one or more enemy infantry units during any initiative step in which they fight an assault , they gain +1 to wound (bulky models count as 2 models and very bulky count as 3).

Nostraman Blood – All models with this special rule fall back +1″ further than normal , if the fail a pinning test , they may elect to fall back instead.

From the Shadows – All units with this special rule have a 6+ cover save on the first turn of the game. Even in open ground this may be combined with Stealth etc as normal, but other forms of cover which provide a higher save supersede it

Seeds of Dissent – If an army’s warlord is slain , each unit in the army with this special rule must take an immediate morale check as if they hailed just suffered 25% casualties from shooting

Strength of Will – Automatically pass all fear tests and must re-roll a single d6 when morale and pinning tests are failed.

Promethean Gift – All hand flamers , flamers and heavy flamers used by a unit with this special rule count as having +1 strength. In addition, any enemy flamer based attacks used against them are reduced in strength by -1

Cut Them Down – All units with the Legiones Astartes (Word Bearers) special rule must always make sweeping advances when possible and must re-roll results of a 1.

Charismatic Leadership – Any primary detachment force chosen from the Word Bearers legion must take a second compulsory HQ choice on the force organisation chart ( where a second choice is allowed) this choice must always be either a Centurion or Chaplain consul.

~I’ll let you all pick out the coolest one.  I like the “echoes” that ring between some of these Legion rules and their 10,000 years later Chapter Tactics.  It’s very cool and subtle.