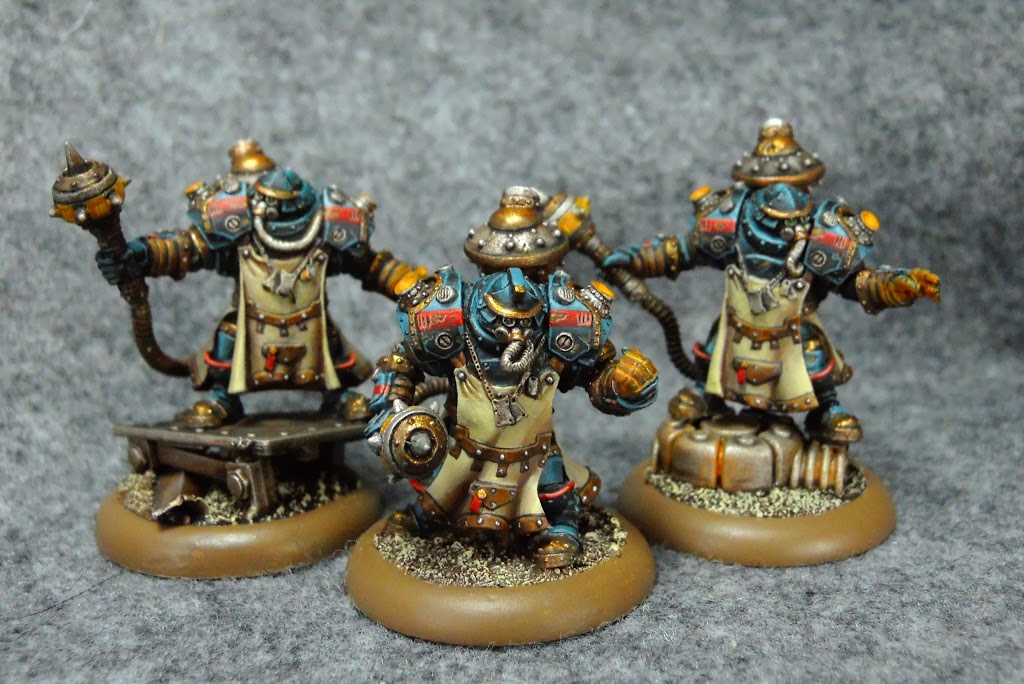 Lets finish off these dwarves shall we? Last time, I left with a apron painted Gun Corps Brown. This is highlighted with Hammerfall Khaki Blended into some Menoth White Highlight. I also start on the leather areas with Umbral Umber. The Umbral Umber is highlighted with Blodtracker Brown. A few final highlights are added with a mix of Rucksack Tan and Bloodtracker Brown. These are applied in very thin lines along all the ridges of the various leather areas. Then all the leather areas are outlined with a 50/50 mix of Umbral Umber and Exile Blue. Next I go over the rivets from the apron with some Radiant Platinum. I touch up a few other areas with the metal as well. I also get started on the glows. They get a nice foundation of Iyanden Darksun to serve as a base for the yellow/orange that will come later. But before I go further with the glows, I start on the read areas. I add some bands of Skorne Red in various places. I kinda regret the placement on the shoulderpads, since they cover up one of the cooler areas of blending. Of course I don’t regret it enough to do the whole thing over again. The red is highlighted a little with Khador Red Base. A few final highlights are added with a mix of Ryn Flesh and Khador Red Base. I try to define the vents with a very thin line of this mix, but I’ve covered them with a lot of paint at this point and the detail is almost gone. I guess that’s another reason to move that band of red if I ever paint another unit of these guys.

I also do a little more work on the glows. I cover the Iyanden Darksun completely with Heartfire. In the middle I lighten it up some with Moldy Ochre, which is just kind of a pale yellow. To warm up the glows a bit and make them look a bit more like fire, I mix some Bloodstone in with the Heartfire and begin blending it into the areas around the edges of the glows. We’re almost there. Next is battle damage. I paint some really thin lines of highlight in a few areas around the armor. Above these lines I add some splotches of Umbral Umber, leaving only a thin line of highlight to represent light reflecting off chipped paint. I blend a little Ember Orange into the Umbral Umber in a few places to give the appearance of rust. Instead of a glow for the eyes I decided to paint on some lenses. I used green since this color shows up from time to time as a secondary accent on some of my mercs. Usually its on bottles of wine and the like. I start with a line of Necrotite Green along the bottom, and while it’s still wet, I add some Ordic Olive above it. Above that a little Thamar Black is added. I add a tiny spot of Trollblood Highlight in the middle of the black to represent reflected light. I went with this pale gray rather than a pure white since I didn’t want to go with too stark of a contrast. The last thing to do is re-define the frame around the lenses with that same black mix I’ve been using, followed by a line of Radiant Platinum. Unfortunately the detail here is so tiny, it was too difficult to get a perfect line. Fortunately its only really noticeable when you zoom in this close.

~ And there you have it. Of course I’ve barely begun to reinforce my Mercenary Forces, so check back soon for the next unit I’ll be adding: Gun Mages! I really don’t know how I’ve made it this long as a merc player without them.