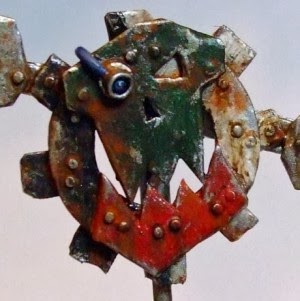 It’s been a while since I’ve done an article for Bell of Lost Souls and I thought it was about time rectified this. After a couple of articles devoted to Nurgle (all hail the Bloated One) I decided it was time to return to the the Ork fold and do a follow up article to my earlier ones. My earlier articles dealt with how I went about looting vehicles and covered a step-by-step guide to this process, these can be found with these handy links… One Meks Guide, One Meks…Part 1, One Meks…Part 2, One Meks…Part 3.

The subject of this article is a commission I did last year. It is a much larger vehicle than the three looted wagons in the how to guides linked above, but it is a good example to show that the same techniques and processes can be used regardless of the subject’s size or how ambitious your mad scheme is. The starting point was to end up with a vehicle that could transport and launch Koptas from a flat deck, would have plenty of guns including a Deff Arsenal and include some sort of superstructure on the flat deck. As a bonus it would have some internal detail incorporating to a lift of some kind. Basically we needed a Helicopter Aircraft Carrier. But for Orks. With such a large and involved build I started with sketching things out before moving onto a mock up. In the earlier articles I discussed how while in many situations a mock up may not be needed it can be of great benefit to get the basics sorted – sizes and rough positions, it gives you a direction in which to set. On this occasion I built the whole thing out of foamboard, this allowed me to easily chop and change until I had something we were both happy with. Then the cutting began. An unbuilt Baneblade (or Shadowsword, I can’t remember which) was used as the base vehicle. The floor panels were cut into quarters while the track units were cut into two sections, the hull could then be lengthened and widened using lots of styrene.
The next step was to begin the internal detail; I couldn’t continue the build until this was done as it would impact the design of the next ‘level’. The Karrier deck was the next part to be started, this was going to be attached to the under deck structure and form one large removable section allowing both access to the internal area and helping with storage & transport. A mock up was first cut from foamboard to allow me to refine the size and shape of the deck before I started cutting styrene. As well as to accurately position the lift shaft and the Multiple Rokkit Launcha. Once the deck panels were cut out the under deck structure was glued to the underside of one of them. The build now progressed by working alternatively on the internal area, the under deck section and the underside of the deck. All of these areas needed to work together with each influencing the design and detail of the other. I couldn’t simply work on one and decide it was finished then move onto the next part. The build had to stay fluid; I adapted the design as I went letting things develop organically incorporating new ideas and changes of heart.
Advertisement
So here is a collection of pictures showing some of the things I worked on at this stage:
Lower hull including the drivers cab, sponsons, internal detail: Under deck areas and the internal frame of the deck before the top plate was added: Advertisement
And the vehicle as it stood at this point, Everything from the underside of the deck down is basically done other than the track being added. This includes the exhausts at the rear and the twin Boom Gun turret mounted at the front. My attention now moved above deck…
As you can see in the mock up much of the deck is open for transporting the Koptas, down the one side we have a superstructure. This superstructure is split into these areas – front is the Deff Arsenal, centrally we have a control tower and behind the Mek Shed complete with KFF and refuelling station. I began with the Deff Arsenal. This needed to be big enough to handle enough firepower to justify the name, but the larger it was the less room I would have to get the superstructure in. To get the right size I did a quick mock up from card with the aim of getting it big enough for all the guns but not so big it caused problems. Once happy I built the proper version along with its base. The basic shape of the superstructure was then built. This looked plain at first but as with the under deck structure this first stage was just the internal skeleton which would be built upon . The superstructure was to be removable, so I fitted magnets to it and the deck, the structure slotted into the deck itself. Once everything was detailed up this join would not be noticeable. The deck was then plated up in typical Orky fasion, below you can see the entire deck and under deck removed from the Karrier, the base of the Deff Arsenal is part of this structure but everything else can be removed. Advertisement
Incorporated into the deck is a hinged multiple rokkit launcha…

With the deck plated up the superstructure could then be finished off. I split the main section into three levels, a Krew level (for Da Boyz) at the bottom, a Kommand level (for Da Nobz)above and then a Grot level (unsurprisingly for the Grots) at the top. The Grots were squeezed into this top level as they were to man the AA gunz on the roof. The Mek shed gained a KFF mounted on the roof and a fuel tank for refuelling the Koptas at the rear (along with a hose) Both the KFF and the tank is magnetised. To finish off the superstructure more details such as glyphs, grab handles and a series of walkways were added. Once the superstructure was finished the build was pretty much complete, I went over finishing any details and adding the track from Blood and Skulls Industry. I left this to left as it was rather spikey and would make handling everything a bit prickly. To finish here are the stats:
Length including Boomgun barrels:450mm (17.75″)
Width: 312mm (12.25″)
Height to top of Superstructure (not including AA Guns): 225mm (9″)
Total Weight:1.72kg
Total Number of Parts:49
Total Number of Rivets Added : 6174 (yes, I kept track)
So that is that. The biggest build I have ever done, and probably likely to remain so until I tackle the Orky Leviathan I have always wanted to do.
It was an enjoyable build but I was relieved when it was finished.
The only difference between building something like this and the smaller Looted Wagons that were the subject of my tutorials here on BoLS is the size of the finished model. The build was done in exactly the same way, from mock up to finished piece. I hope the Karrier will give you some ideas and the confidence to tackle your own looted vehicles, be they wagons or super heavies.
To see more pictures of the Karrier please drop into Recalcitrant Daze there are many more shots to see of both the building and the finish vehicle. In the meantime please feel free to comment below and I will try and answer any questions you may have.

Author: Rictus
Rictus is a veteran tabletop & miniatures hobbyist with over 10 years of experience. His specialty is miniatures painting and conversions. He began writing for BoLS in 2011.
Advertisement
Conversions Hobby Miniatures Orks Warhammer 40k
Advertisement