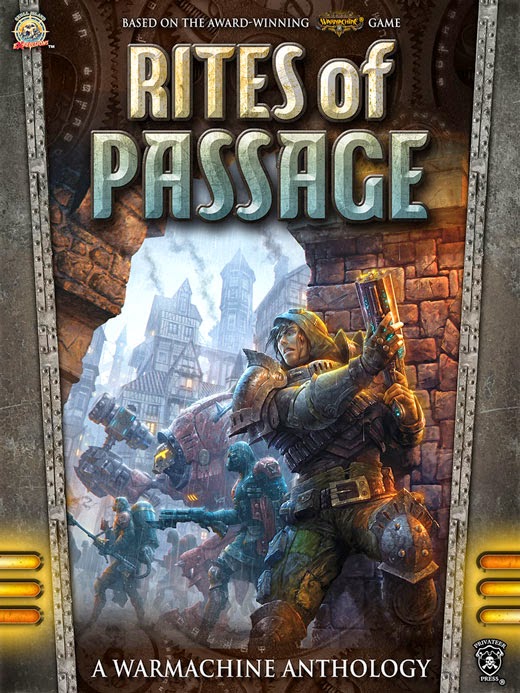 A new book has hit the digital bookshelf from Skull Island Expeditions. Is it worth of your attention?

Skull Island Expeditions, the digital narrative delivery arm of Privateer Press, just released Rites of Passage, a collection of short stories introducing us to the next group of heroes in Warmachine. These characters, all fledgling warcasters, have recently been released in model form and will also be represented as the protagonists of the upcoming Warmachine: Tactics video game set to release later this year.

Over the last decade, we have followed now familiar faces throughout the Iron Kingdoms metaplot, many of which have risen to great status and will be taking a backseat so that new champions can arise through the crucible of conflict and war that continues to shake Western Immoren. Rites of Passage represents the origin story of these new, intrepid men and women as they navigate the waters of learning to wield magic, command allies in warfare, and control the titanic warjacks on the field of battle.

In Cygnar, perfectionist Lieutenant Allison Jakes struggles with marrying her impressive dueling skill with an aged and clumsy Ironclad and a squad of veteran trenchers as a critical mission puts them in way over their heads. In Llael, Initiate Tristan Durant suffers his warcaster training under High Executioner Servath Reznik while trying to integrate his faith with the reality of war and the Protectorate’s domination of Northern Llael. In Khador, prodigy Kadet Andrei Malakov balances his loyalty to friends, family, and the rapidly-expanding bourgeois merchant class in Vanar’s new empire. On the seas of the Meredius, when ruthless boarding skirmisher Aiakos discovers his power, he seeks to make his value known to Admiral Axiara Wraithblade, commander of the Dragonfather’s raider fleet in a daring mission. In Ios, as the Retribution of Scyrah gathers political power and begins their march east, Elara battles with trying to find her place in her society while enduring the trials of learning and understanding her power. In the city of Merywyn in Khadoran-occupied Llael, pickpocket Gastone Crosse rebuffs the recruiting efforts of the Llaelesse Resistance while making a name for himself as a master thief until a high-risk heist takes a turn for the worst.

Rites of Passage is six separate short stories, each giving us a look at these new characters as they find their place in Western Immoren. Despite being written by six different authors, the stories manage to maintain a similar tone and feel throughout. With the possible exception of Aiakos, every character is three dimensional and experiences an arc that goes beyond the simple acquisition of the warcaster talent. While I might complain about this lack of arc in Aiakos’s case, I found myself happy to let it slide since his story was still quite entertaining.

I found Rites of Passage to be valuable and unique in comparison to other Skull Island or Privateer Press books, because it explores the perspectives of characters who exist in a somewhat nebulous state between your everyday denizen like Rutger Shaw and your superhuman warrior like Lord General Coleman Stryker. These characters aren’t experienced veterans that are fully confident in their abilities yet. They have very real doubts and fears and haven’t quite settled into their new, unique roles yet. Warcasters are unusual figures in military structures, in that they typically exist outside of them and are able to take command of an engagement or requisition supplies despite the presence of those of higher rank. Having to balance this pressure with controlling warjacks, commanding troops, learning to wield the arcane, and fighting by conventional means puts a tremendous amount of pressure on these individuals. This book makes them feel decidedly more human.

As an avid fan of the Iron Kingdoms Roleplaying Game, I have a tendency to view Skull Island books through the lens of their value to me as a game master. Does the book help provide me with tools that will help my ability to run a game? Does it grant new insight into specific locales, attitudes, and customs? All-together, I think this book actually provides less insight on the game master side of things, but does provide more on the player side, specifically to anyone wishing to take the warcaster career, which is, needless to say, quite popular to many players. The characters encounter problems in these stories that must be fairly common to many novice warcasters, making this excellent source material for such people.

As of the time of publication, I have read seven of Skull Island’s offerings, and this is by-far the one I’ve enjoyed the most. It’s a nice length, the prose feels like a step-up from the others, and the characters are well-written. I’m excited to see what comes next for these new heroes.

I highly recommend Rites of Passage to anyone interested in Warmachine and the Iron Kingdoms. You can pick it up at Skull Island Expeditions, Amazon, and Barnes and Noble. 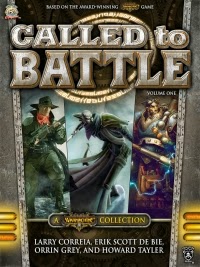