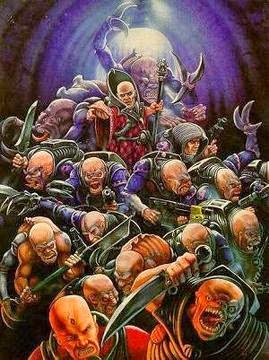 What’s purple, subversive and drives a way snazzier car than you?  Click to find out…

Genestealer Cults are a piece of fluff which remains absolutely awesome, though little known about apparently, and it seems that those who want them banned don’t really understand what they are, hence the need for this little piece. I don’t know anything about the people who posted this, but I feel that it is to their detriment that they have missed this wonderful slice of Tyranid fluff, as yet unretconned and still brilliant, and I don’t like the idea of a generation of 40K players growing up without the full story on Genestealer Cultists.

Put simply, when a Genestealer gets you, it does one of two things, depending upon how many Tyranids are in the system. The first is kill you – as we all know, Tyranids love biomass.

Now, it is true that on the surface, Tyranids don’t have allies. Allies implies negotiation, treaties, compromise and so on – things that Tyranids literally have no conception of. The thing is, the problem here isn’t the idea of ‘non-Tyranid armies working with Tyranids’, but the idea that they are allies who are doing so willingly.

Tyranids don’t have allies. They do have ways to make you work for them, though. It is simple enough for anything organic to be compromised by a microscopic Tyranid organism. Tyranids, more than any other species, are the masters of genetic warfare. So perhaps if you think of Genestealer Cults less as ‘Allies’ and more as ‘Humans violated at a genetic level by incurable, almost-sentient Tyranid retroviruses which compromise their minds, bodies and souls to the point that they are nothing beyond simple reproductive spores for future generations of Genestealers’ you’ll better understand why Genestealer Cults actually make perfect sense as ‘allies’ for Tyranids.

You see, it really begins to make sense when you factor in that this secondary mode of Genestealer behaviour only occurs if there are no other Tyranid organisms nearby. This because Genestealers are a vanguard – they lead the attack. And this secondary behaviour is actually the reason for which the species is named – it ‘steals’ your genes. In what is effectively an act of rape, the Genestealer attacks you with its tongue – every iteration of ‘Stealer has been modelled with a long tongue for this reason (well, and because in their original iteration, ‘Stealers were a 40K-fied Giger ‘Alien’, but that’s by the by).

Once a Genestealer has plunged its tongue into you, that’s it for you. You’re not dead, but you’re not you any more. Your ‘stolen’ genes have been replaced with Tyranid ones; you’re not human any more – you’re a Tyranid procreation organism walking around in a human-shaped skin suit. The idea was that the act ‘infected’ the victim with Genestealer genetic codes – think a very aggressive retrovirus – that rewrote your genetic codes from the inside out. You kept the appearace of your outside species, so an infected Tau would look like a Tau, an infected Ork would look like an Ork. But you were no longer technically one of the same species. Now you are nothing more than a Tyranid broodmare.

This is because this is the only way Genestealers reproduce. They don’t have sex themselves; they use others. A Broodlord is simply what naturally happens to any Genestealer given enough time, rather than any indicator of a number of ‘children’.

The fact is, as a victim of a Genestealer’s ‘kiss’, your children are no longer your own, and are now destined to be born with three arms, chitinous armour and a permanent, unbreakable link to the gestalt Genestealer brood mind. These ‘infected’ children areGenestealer Hybrids; half-genestealer, half-host species. Needless to say, this gave modellers a host of opportunities for exciting models. Yes, there were the plastic genestealer hybrids that came with ‘Genestealer’ and the awesome ‘Terminators and Tyranids’ boxed set, but they were pretty bad figures (although the guns they got were good). There were also some lovely metal models by Bob Olley and others, but basically you were encouraged to go mad – splice your host kits with Genestealer kits and see what you could come up with. And this is where I feel a lot of today’s gamers have kind of missed the point. To think of a Genestealer ‘Cult’ as a cult is to misunderstand it. It’s not like a chaos cult, made up of the weak, the dispossessed, those who have turned to dark powers willingly. It’s entirely made up of victims. Every ‘brood brother’ was a normal person once. Now they’re a slave to the Hive Mind, infected by a Tyrannic version of AIDS that means their children will be born as monsters. They’re not allies. They’re a zombie horde… only retaining their creativity, capacity to think, to destabilise, to employ guerrilla tactics and engage in asymmetric warfare. Unlike a Chaos cult, a Genestealer cult has no choice about who and what it serves, and can never change its mind. Every once-human member’s soul has been hollowed out and filled in with the Genestealer Brood’s telepathic web. And this, of course, is where the Patriarch comes in. To all intents and purposes, every member of the cult would be one of his literal children. The were grossly fat, and because of their prolonged exposure to humanity, could almost talk – albeit through the medium of their 4th generation children. Yes, they seem to go against current Tyranid fluff, but that’s only when you consider that the fluff as-is doesn’t represent Genestealers who have spent centuries or even millenia embedded amongst a different species, growing in the dark. The goal of a Patriarch is to prepare a planet for the coming Tyranid fleets, and so stealth and misdirection are the number one tools, not murder. There’s this idea that Tyranids just want to eat everything, and that’s a simplification. The species as a whole does, but the higher Tyrannic organisms can think – they embody the Hive Mind itself, which is an intelligence. Not a human intelligence, to be sure, but capable of thinking, reasoning, and tactics. So, while a Patriarch may not use technology because he doesn’t understand the concept of what on of these human ‘guns’ is, he has minions who do.

The ‘army’ isn’t an army either. It’s a guerilla terrorism unit, and if fielded on the battlefield, that’s how it should be played. Functionally, the old army broke down into the following general ‘sections’:

The Genestealer Cult Army List
The Patriarch: the lone, original Genestealer who ‘founded’ the cult.

Genestealers: actually very limited in number, because of course – there are no other Tyranids nearby. If there were, the humans would simply have been eaten. Genestealers were the assault elites (obviously).

1st to 3rd generation Hybrids: in terms of equipment/ability, these were basically chaos cultists. They were never game breaking, although they had a slight edge in combat due to their Genestealer heritage.

4th generation Hybrids: in terms of appearance, these villains looked, to all intents and purposes, human. In fact, they were closer to something like a Genestealer version of a Zoanthrope. Not because they could kill tanks (they couldn’t. In game terms they were just psykers) but because they were secondary synaptic lynchpins, enforcing the Patriarch’s telepathic rule.

The army was a bit of a hodge-podge, and never really had a full set of models. Nonetheless, it was flavourful, and until the release of Advanced Space Crusade and the first Tyranid plastics, to all intents and purposes, it WAS the Tyranid army. Nowadays, it’s little more than a characterful addition to Tyranid army, albeit one which is presently unplayable outside of Apocalypse.

So, can it make a comeback?

Is this even a question? In an era where no-name jabronis like The Crimson Slaughter get a codex, why the hell not?

Of course, Tyranids don’t have allies. Of course they don’t. But this wouldn’t be an allied codex. It would be a codex which represented a very specific kind of Tyranid army, one which occurs throughout the Imperium, and exists for centuries or even millenia without any kind of back-up, waiting and hiding. It isn’t stupid. It isn’t atavistic. It isn’t an animal. To think like that is to be a little like Hudson in ‘Aliens’ when he asks how they could cut the power.

They can cut the power because they’re not animals. They’re aliens. At the end of the day, there are only two things we know about them:

They are not like us.
We will never truly understand them.

Genestealer Cults are great, and should absolutely make a comeback in a new codex. Anyone who argues ‘Tyranids can’t have allies’ hasn’t understood the nature of the Tyranids.

And seriously, check out how brilliant their vehicles are:

They are literally the only army in 40K to show up for battle in stretch limos.

Author: Larry Vela
Dad, Gamer, Publisher, Pilot, Texan. All games all the time since junior-high. I started BoLS Interactive in 2006. I’m a lifelong tabletop & RPG gaming enthusiast, and internet publisher working to entertain and inform my readers every day. I've been playing RPGs and Tabletop Games since the 1970s. I'm been playing and covering Warhammer and Warhammer 40K for over 35 years.
Advertisement
Lore Tyranids Warhammer 40k
Advertisement 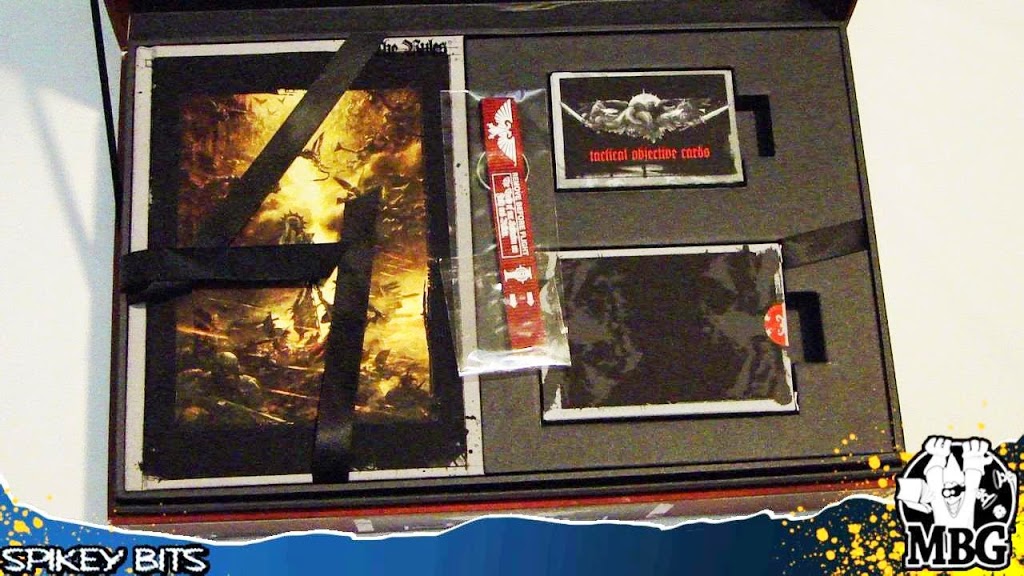