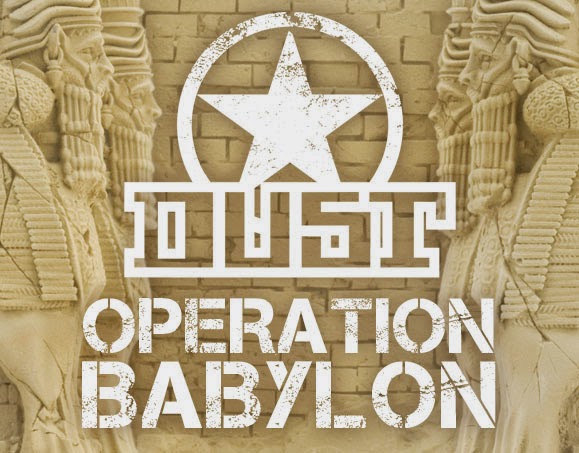 Paulo Parente’s DUST is rolling out a new product via Kickstarter.  Here are the details! The year is 1947, and the war isn’t over.
Out of the mind of Paolo Parente comes the world of Dust, an alternate-history World War Two game setting in which three mighty superpowers clash for control of a mysterious alien power source: VK. The extraordinary properties of VK have brought forth revolutionary new technologies. Tanks have evolved into powerful combat walkers, rocket troops take to the skies, and the latest laser cannon, phasers, and Tesla weapons rule the battlefield. Starting next week, the latest release for Dust Tactics will be Dust Studio’s first Kickstarter project: Operation Babylon.
Operation Babylon will bring the war to the deserts of the Middle East, introducing the Dust equivalents of real historical forces like the Afrikakorps, Spetsnaz and United States Marine Corps, all combined with the excitement of classic action-adventure fiction.
Dust Studio are working with Battlefront to bring this project to completion. Battlefront will handle the fulfillment of the pledges, shipping the rewards to backers through their worldwide distribution network. The detailed plastic miniatures produced by Dust Studio are pre-assembled and ready to play straight out of the box. Because of the complex and expensive tooling processes involved, previous releases have always been brought out in stages, with each batch of models funding the production of the next.
Crowd-funding this project through Kickstarter will allow Dust Studio to accelerate the production of all the new Operation Babylon models, and get them out into the world sooner, and with a greater variety of options. If you haven’t explored the world of Dust yet, there has never been a better time to start!