Forging the Narrative – What is Narrative Gaming? us campaigns for a variety of gaming systems.  Campaign gaming can be quite rewarding if you are a tabletop wargamer, though they do require quite a bit of work to see through their conclusion.
The target audience for this piece is written for my gaming group as we prepare for our 2014 Fantasy Campaign in Lustria, but I am adapting it to be general and involve pretty much any system though I shall be focusing on Games Workshop exclusively and Warhammer Fantasy and 40,000 specifically.
Before we can really delve into campaigning though, I would like to address and discuss what a Narrative Gamer is exactly, for a lot of what I am going to be writing about deals with this style of gameplay and I feel that it is important to understand this style a little bit better before going into more depth into how they apply their style to campaigning or simply gaming in general.
There are many myths that surround the Narrative Gamer.  There are many misunderstandings or mis-truths spoken about what narrative gaming is in the first place.  For some, the Narrative Gamer is a player that can’t win at competitive Warhammer, so they have to play in an environment where power-listing cannot happen, because knowing how to not only use but go up against powerlists requires elite skill.  For others, narrative gaming is a false dichotomy created by Games Workshop for producing lousy, sloppy, non balanced rules where they are basically saying that the narrative is whatever you want it to be, and we don’t care about game balance so do what you want.  (this part is fairly accurate, the developers of fantasy and 40,000 have gone on record many times saying this very thing) and Forge the Narrative is synonymous for being bad at game design and a failure to deliver a tightly bundled competitive ruleset.
When it comes down to playing in campaigns, I have found that most run strongly under the guise of a NarrativeGame as it is a great chance to tell a story and progress a story line.  It should be noted, however, that not all campaigns need be Narrative Games; a campaign at its simplest is simply a series of linked games.  Tournaments can be thought of as campaigns if you think about it!
Ok that’s great, but what exactly is Narrative Gaming then?
Narrative gaming is a style of playing in the system where the story of the gaming system is adhered to first and foremost.  It is a style of gaming where list-building comes second to actually playing the game on the table and creating a battle as the stories would present them.   A space marine army is known for its tactical marines and a narrative list would include a backbone of them as the stories would, whereas in a game played in a more competitive environment the tactical marines will often be removed as they are not as optimal or points-efficient.
It really has nothing to do with being good, bad, or indifferent with the game, it is merely an expression of how you want battles to look and including elements that may not be optimized game-wise, but would be present in the stories.
Why would anyone actively choose to take bad units?  Do narrative gamers really not care who wins? The chaos troll pulls its master into battle
This is a common question that I get asked, and is also a common ding on narrative gamers in general – that they do not really try or care about the game and just kind of shuffle units around randomly while making pew pew noises and making explosions with a cheetos bag while high fiving their buddies.
The reality is that I have been narrative gaming for well over twenty years and I have never once run into a player that didn’t care about winning.  Every player that I have played against cares about winning and tries to win, and every player that I have ever played with or against has put effort into their games.
That leads down to the crux of the issue:  Why would anyone actively choose to take bad units?  This is the mystery that divides narrative gamers from competitive gamers and what the campaigns that I run chooses to focus on.
A narrative game represents two armies that reflect what you would read about in the fiction.  Granted, we can be pedantic and argue that even powerlisted monstrosities can be justified somewhere and indeed that is correct.  Therefore I go with the term what you would commonly encounter in the narrative.
So again, if you are taking bad units, how can you say that you are trying to win?
When playing in a narrative fashion, we take our cues from historical games before us and games where Game Masters dictated what lists would be fighting to preserve a sense of balance.  Games like Battletech are great fun or fighting off marauding gauls with your roman legions can be a great tactical exercise, but when points come into play and you let people begin to cherry pick what they want in their armies they will naturally start choosing the best that they can (and as much as they can!)
A narrative game will feature many of these “bad units” and they will be supported and led by their elite units, not fully composed of nothing but elite units facing off against elite units.
This does a spectacular job of rebalancing.  Lets pretend we have a jar of 100 marbles.  Lets say that each marble represents a build you can make in the game.  When we are powerlisting, take about five of those marbles out of the jar and put them down.  Those are the builds that are viable and have a chance of beating each other.  The remaining 95 marbles in the jar are at a large mathematical disadvantage due to points disparities, special rules, and loop holes that exist.  Playing within a competitive environment, you will largely only see those five marbles or slight variations thereof repeatedly (until a new army book comes out, then one of the five marbles gets put back in the jar and another marble takes its place)
When we choose to use those core units that the books write about and use builds that are a step down in power, we are allowing more viable builds to enter the game.  What is not viable in a powerlisting environment is perfectly viable in a narrative environment.  We have more marbles to play with than just the five.
This also tests our abilities as we no longer have the ability to rely on units exploiting poor rules.  We have to make do with poorer units as well as our elites, much like the commanders in the stories have to do.
Narrative Gaming – Experiencing More of the Game than just the Core-Six A trait that most narrative gamers also possess is the ability to be able to adapt to situations where they start off at a disadvantage.  Campaigns will often feature one side with a slight advantage due to past battles or simply due to the story.  This could come in the form of points disparity, special equipment, or special rules like veteran abilities that one side possesses.
The scenarios used in many narrative games are not just the Core-Six from the main rulebook.  There are dozens upon dozens of scenarios in existence that many people don’t even know about.  It never fails to surprise me at having a discussion with a player and talking about the narrative scenarios in the back of the rulebooks and many not knowing what I am talking about or have had even seen them before.
Narrative gaming opens the game up to many situations and tests our tactical acumen by pitting us against things outside of our comfort zone; things that we cannot optimize for.   Warhammer 40,000 has a huge breadth of environments and scenarios that can be played, from cityfight games inside heavily packed and dense urban environments, to planetstrike scenarios to a host of Altar of War missions with different victory conditions and Apocalypse battles.  Warhammer Fantasy has a host of narrative scenarios in the core rules as well as Storm of Magic.  There are also many old campaign books from the past that have great ideas for scenarios and contain scenarios themselves (for example, we are using the Lustria campaign book released in the mid 2000′s which has a couple of campaign systems and scenarios detailed within).
There are also different environments that you can test your forces in.  For Lustria, we will be fighting in dense jungle terrain where the jungle blocks a lot of line of sight, humidity puts a damper on black powder, and the jungle itself is as much an adversary as your opponent.
Narrative gaming offers a wide variety of ways to play the game and in my opinion it opens the game up to experience a lot more.  It really is not about people that do not understand how to min/max properly or people that do not care about winning.  It is at its core putting the storyline first and playing the game on the table over winning in the list building phase of the game.
Next time I will discuss putting together some campaigns and we will look at the different types of campaign systems that I have run more in depth as well as their pros and their cons.

Tell us about your narrative gaming experiences. 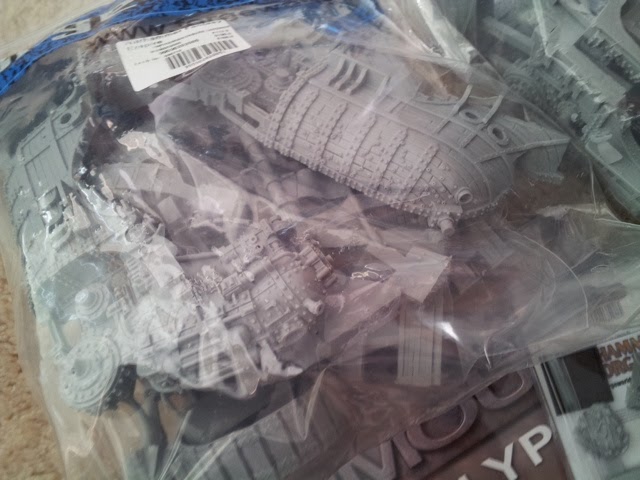