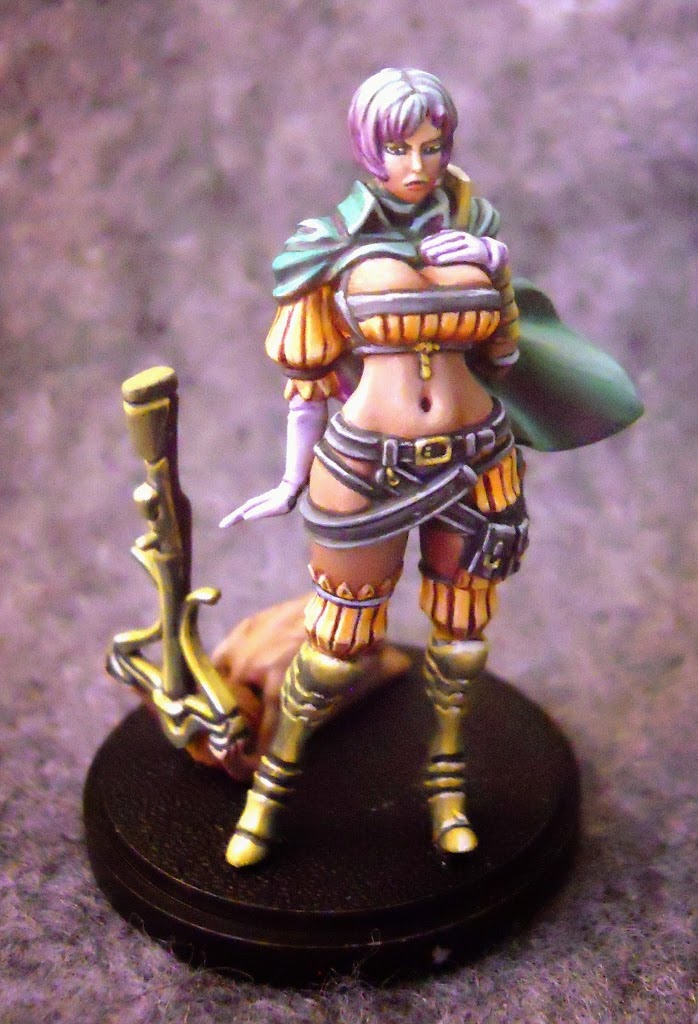 Time to finish up the Great Game Hunter.  Grab your brushes and follow along… Last time I had just started on the greaves, giving them a basecoat of Cryx Bane Base. I’ve begun to blend in some Sulfuric Yellow as a highlight. Like most yellows, Sulfuric Yellow is not the most opaque color, so I can blend it directly into the wet basecoat. After the previous step has dried I add some more Sulfuric Yellow and blend it in to the surrounding area by adding increasing amounts of the Cryx Bane Base until I’m blending it into pure Bane Base. I increase the highlights by blending some Menoth White Highlight into the Sulfuric yellow. Then I add thin lines of Sulfuric Yellow/Menoth White Highlight along the edges of the plates. These stark highlights are one of the most crucial parts of creating a NMM illusion. I need a nice contrasting shade tone for all the crevices. For this I use another one of my favorite custom mixes: a navy blue tone mixed from Umbral Umber and Exile Blue. I also blend this color into a few areas I want really dark, such as the base of the knee. I’m really pleased with how the greaves turned out, but the Sulfuric Yellow was so translucent it made it really tough to work with. Next time I think I’ll use the yellow as the basecoat. After giving all the plates similar highlight lines and cleaning everything up with even more blending, I move on to the rest of her outfit giving it a basecoat of Heartfire. I had initially planned to do everything that wasn’t skin in a different tone of green, but decided to scrap that idea. I guess I just wanted to make things even more difficult for myself by painting some more yellow areas. I also decided to paint her left wrist (which appears to be armored as well) using the same method as the greaves. To shade the clothes, I go with my trusty Umbral Umber/Beaten Purple mix. Did I mention I keep a pot of this mix around because I use it so often? Like the Sulfuric Yellow, Heartfire is a very translucent color, so only a very small amount of the purple mix is necessary for a good result. I also add a little highlighting with – you guessed it – Menoth White Highlight. Next I define the strips with thin lines of Menoth White Highlight with just a tiny amount of HEartfire mixed in. Then I add thin lines of that same purple mix between each strip. Now it’s time for everything else. The various leather straps get a basecoat with that same navy mix I used on the greaves before. This is highlighted with increasing amounts of Frostbite.While I have the Frostbite out, I mix it with some Beaten Purple for the gloves. To shade them I mix in some more Beaten Purple and Coal Black in with this basecoat. Then I go back in and tighten them up, adding some shading back in with the original Navy mix. The gloves are highlighted with plain old white (Morrow White is what Privateer Press calls its plain old white) to get the effect of a very pale purple. The only thing left was to go back and add a highlight to her lower lip. Oh and finish up Crossbow Boy. She just isn’t the Great Game Hunter without Crossbow Boy. If you’re wondering about the base, I’m waiting on some of those cool scenic bases from Kingdom Death Monster that aren’t complete yet. So for now, she’ll wait on a plain base painted black and held in place with the barest amount of super glue. And here’s a side shot. It occurred to me early in painting that you could de-creepify Crossbow Boy by at least 80% if you painted him as NMM gold, or perhaps marble. But who would want to do that? Move along, nothing to see here. ~ And there you have it! Hope you enjoyed the article. And don’t expect a reprieve from Kingdom Death anytime soon. There are more unboxing and painting articles in your future. Check back soon!

Author: Ben Williams
Ben Willimans is a Professional Painter and Columnist at Bell of Lost Souls. He has been involved in the hobby and art side of miniatures and the tabletop gaming industry for over 20 years. He has won multiple national painting awards.
Advertisement
Game Tutorial Hobby Kingdom Death Painting
Advertisement 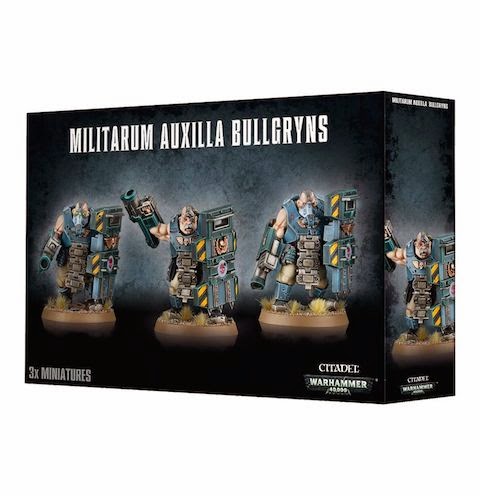