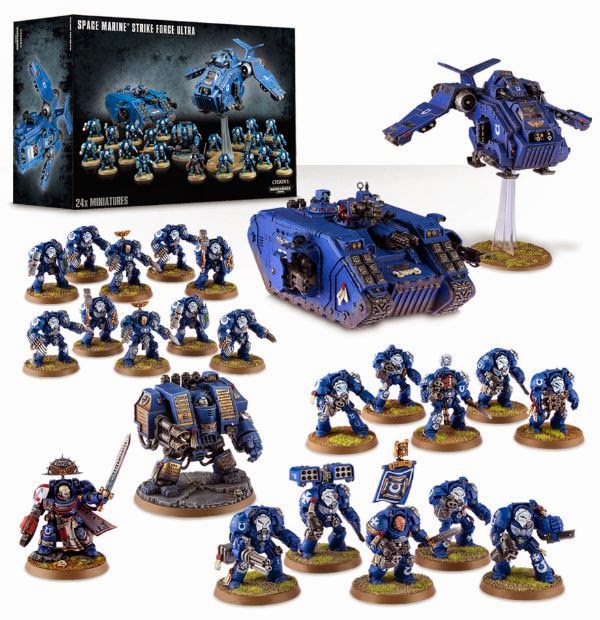 GW still managed to kick out a bunch of new items the launch week for 40K 7th.  Here they are:

Strike Force Ultra is a fearsome deployment of Terminators. These First Company veterans are led by a brand new, never before seen plastic Terminator Captain. Supported by a trio of heavily armoured fighting vehicles and equipped with the deadliest weapons their Chapter can provide, this boxed set is a formidable army in its own right. Stike Force Ultra would also make an excellent addition to an existing Space Marine collection.

All the units in this boxed set come with a selection of weapons options, enabling you to tailor them to your needs. The Terminator Captain comes with two bare heads, one scowling from behind a rebreather while the other sports a bionic eye. Tempestus Scions are disciplined, elite soldiers who fight without question or hesitation until their orders are fulfilled. An army of Tempestus Scions can change the tide of a war with a single strike. Whether they are grav-chuting behind enemy lines from the ramps of Valkyries or ploughing a path to the heart of the action in their Taurox Primes, these elite fighters are always first into the fray.

This multi-part plastic boxed set contains 1 Officio Prefectus Commissar, 25 Militarum Tempestus Scions, 1 Valkyrie and 2 Taurox Primes. It is the perfect start to a dedicated Militarum Tempestus force or a hard-hitting addition to an existing collection. Citadel released 4 new paint set bundles this week (Dry, Layer, Base, Layer) to make it easy to pick up all the paints of a specific category all at once. The Terminators of Strike Force Ultra are all but unstoppable on the field of battle. Supported by the most heavily armoured fighting vehicles, led by the most experienced warriors, and equipped with the deadliest weapons their Chapter can provide, these veterans can crush despots, conquer worlds, or stop an invasion in its tracks.

About the Book:
Dataslate: Space Marines Strike Force Ultra contains brand new background and rules to use a force of warriors from a Space Marines 1st Company. It features two datasheets, one based around a Stormraven Gunship and the other around a Land Raider, providing you with new ways to field your Space Marines in games of Warhammer 40,000. ~ Who’s signing up for what?