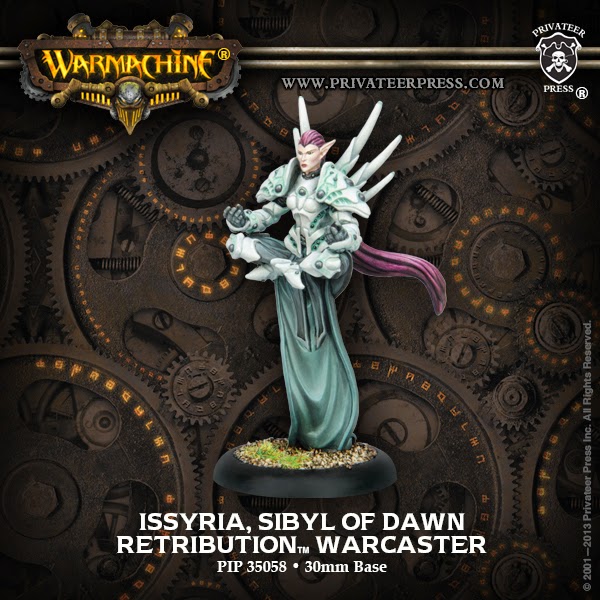 Retribution has been fortunate with the release of Vengeance, Issyria, Sibyl of Dawn is a shining example.

The most obvious distinction she carries is that she is the first warcaster without an offensive attack. Issyria is the first all support caster, everything in her arsenal is there to support her troops and warjacks.
With her Focus score of 8 she is one of the highest focus casters in Warmachine. She has an impressive Def stat but an extremely low Arm making her very vulnerable to a lucky assassination.

Issyria’s primary attraction is her impressive host of powerful abilities.

Ancillary Attack:Ancillary Attack is the only way Issyria can get some damage off and she requires a functional warjack around for it to work. Pair this with Hyperion or any number of the Myrmidons in Retribution’s stable and she will pack quite a punch or have an impressive gun.
Arcane Vortex:Arcane Vortex: Arcane Vortex allows Issyria to protect herself from spell assassination casters that to whom her low Arm score would otherwise leave her vulnerable. This potent ability can also be used to protect other units on the field.
Flight:Surprisingly useful due to order of activation. This ability comes in quite handy due to the timing of when she needs to activate and where she needs to be on the board. There can be a lot of models between her and where she needs to be allowing her to glide over models.
True Sight: Retribution has had trouble with stealth, but Issyria does not.  There is no hiding from the light.

Retribution has easy access to arc nodes with the phoenix and chimera. It is highly recommended that you bring at least one arc node with her although it is not required.

Admonition: A low cost upkeepable spell that allows you to move away if anything gets too close. This is great for survivability of your warjacks. Imperatus, when he comes out, will be quite hard to kill now that he can just walk away from danger. It can also help Issyria stay alive by flying over objects or units to get away.

Blinding Light: Blinding light prevents target warrior model/unit from making ranged or magic attacks and lowers their Def by 2. This spell is the nuts and bolts of Issyria and hopefully your opponent has something you can throw this on and ruin their day. It is not an upkeep so potentially you can use it on multiple units. Most ranged units that are threatening enough to put this on are pretty much taken out of the game. Gun mages, Bile Thralls, Bloodtrackers, and others all become sub-par melee units once they lose their ability to shoot and are -2 Def.

Crusader’s Call: All models in her control area get an additional 2” when they charge. One of Retribution’s strengths is speed, making everything in your army faster which gives your army an extreme tactical advantage. Halberdiers now threaten 15” on the charge with the Thane. Imperatus or any of our other speed 6 warjacks now have a 13” threat. Mage hunter Assassins go up to 16”. Nothing is safe with this new spell to the faction.
Inviolable Resolve: Model/unit gains +2 Arm and Fearless. In the faction there are several targets that benefit greatly from this spell. Adding arm to Imperatus or Hyperion to make some of the hardest warjacks in the game even harder to kill. Our halberdiers and Dawnguard units are also great targets for this, making their high Arm even higher and making already stubborn units even harder to get rid of. The Fearless part of the spell can be useful to rally Retribution troops that failed a leadership check and bring them back into the action faster.
Velocity: For every focus spent, advance 2”. Up to three focus can be spent at one time. This gives her a tactical advantage, allowing her to fly where she needs to go to get her spells off and retreat to a safe position.

Issyria’s Feat is unlike anything Retribution has seen before. It is called Dawn’s Light and it is game-changing to Retribution. Dawn’s Light gives all friendly faction models True Sight and one additional die on attack and damage rolls, you then choose which dice is discarded.

Many of Retribution’s models benefit greatly from dice swing. Look at anything with Mage Hunters for reference. As it turns out Signs and Portents as a feat works out pretty well for Retribution, I recommend when you play Issyria to use her feat early and often. This can really swing the attrition game highly in your favor or allow for a possible assassination. The true sight part of the feat helps Retribution in their previous most unfavorable matchups which were high stealth armies.
~Issyria very may well be our best caster to date. She is so much fun to play and it is very disheartening to your opponent when you feat and remove half of their army. Issyria is a fairly difficult caster to fully master because some of the order of activation issues that can occur with Crusader’s Call and Ancillary Attack. I recommend heavily having a strong beater with her: either Imperatus, Hyperion, or a phoenix. Her Feat makes everything better so have fun building lists with Retribution’s most versatile caster.

Author: Ben Williams
Ben Willimans is a Professional Painter and Columnist at Bell of Lost Souls. He has been involved in the hobby and art side of miniatures and the tabletop gaming industry for over 20 years. He has won multiple national painting awards.
Advertisement
Retribution Tactics Warmachine-Hordes
Advertisement 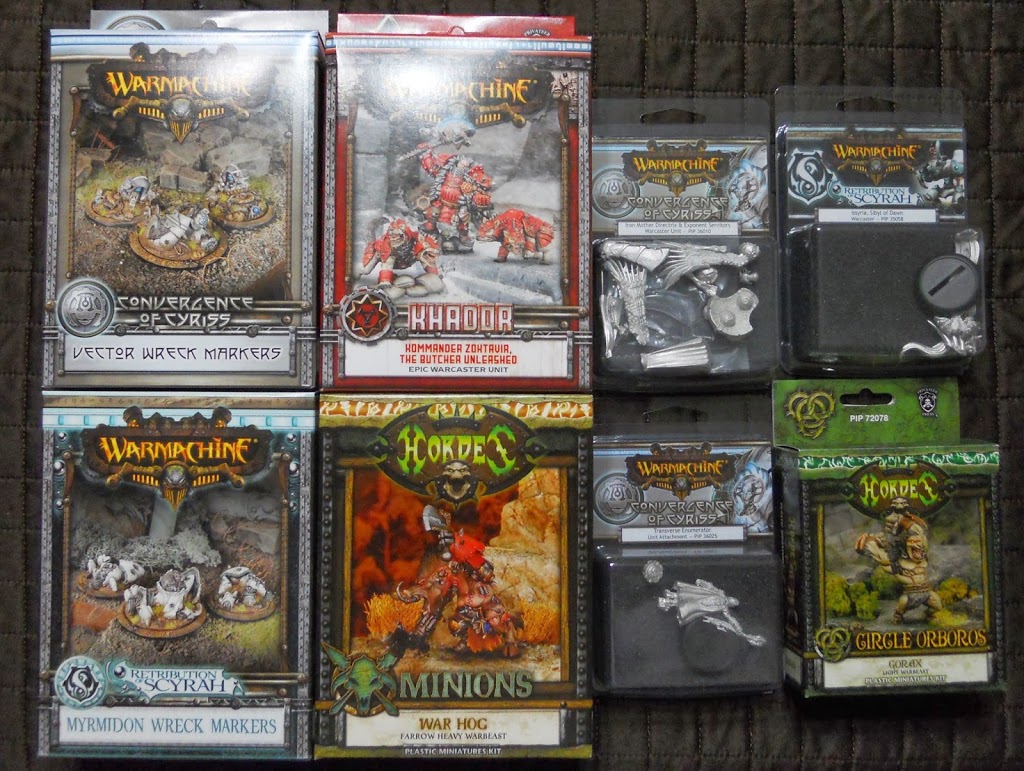