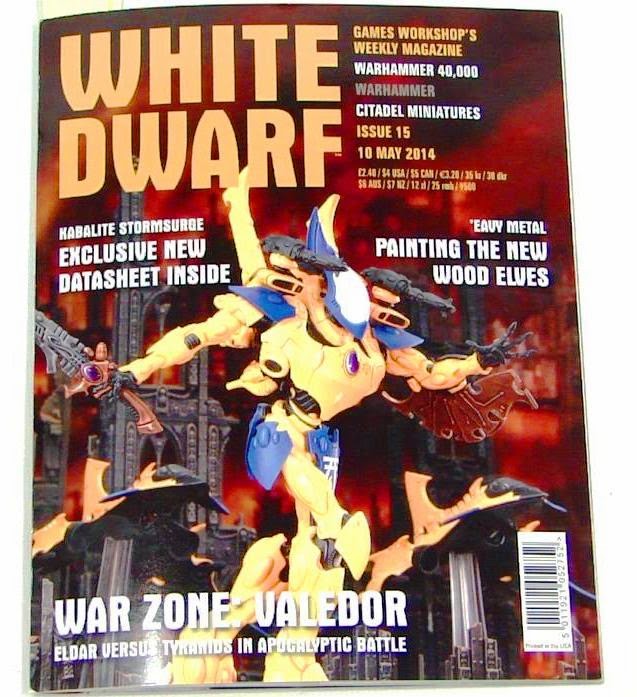 The spoilers were true, Battle Forge and Unbound 40k are heading our way soon!

Besides the big two page spoiler spread, this issue was jam packed with other hobby consent and is by far one of the best White Dwarf issues published in awhile.

As of right now each issue runs about 32 pages, and has a cost of $4 an issue. The current monthly trend seems to be heavy content issues released towards the top of the month, and lesser “filler” content issues dropped later in the month along with limited edition product releases.

For this issue, we got another great paint splatter article with some sweet organic earth tone how to’s for painting the new Wood Elves releases, and a preview of the new Apocalypse Warzone Valedor book (which features the Eldar/Dark Eldar vs Tyranids). Also included in this issue was of course the new 7th Edition Warhammer spoilers (some of which were leaked earlier in the week), and a great Sprues and Glue article covering diorama bases for Fantasy.

The idea for this type of basing regiments has been around for awhile, where you can make larger 40 or 50mm bases that hold more that one model for regiments, and “make change” for causalities suffered with a smaller number of normally based models (on their proper 20 or 25mm bases).

I liked doing that because you can add one offs of models you may not normally use just for fun to add a little flavor to you units! It’s always easy to find a single character or boss figure in sale bins or from trade-ins to spice up your ranks! Here is (mostly) everything that could be gleaned from this issue about the new Edition of 40k.