What a busy week we’ve had, with everything from Orks, to 40K 7th Edition Rules, to the new Starter Set, to an all xenos campaign!

Orks are hot on the heels of 7th, (so June), and we have yet another source talking about kits that are jiving with stuff we’ve heard of late:

Look for the following:

We all heard about the new psychic discipline coming to 7th.  Here’s a description of what it looks like on the tabletop:

Ok, so apparently totally loyal and mentally conditioned Astartes Librarians can just say “aww shucks” and cut a deal with a Bloodthirster now…

2 new Force Organizations. (“Battle-Forged” or foc And “Unbound” take whatever) battle forge gives bonuses. New Missions using tactics cards in addition to our current Eternal War Missions, a new “Psychic Phase” of the game, and the full article next week.

New psychic discipline available to everyone but nids(lol). Psychic phase sounds a lot like fantasy.

Confirmed – Read It Yourself Now before we start, there have been multiple reports over the last few months of a Blood Angels vs Orks boxed set and that is the trend continuing today.

Here is what we’ve heard:

The Eldar and Dark Eldar unite to deny the maiden world of Duriel, the glittering jewel in the crown of the Valedor System, from the united tendrils of the Tyranid Hive Fleets Kraken and Leviathan.

– Twenty new datasheets for the Eldar, Dark Eldar, and Tyranids; including the High Council of lyanden and the Eye of the Hive
– Four New apocalypse missions
– New strategic assets and rules for using Tyranid terrain in your Apocalypse games. The Eldar are loathe to rouse the spirits of the dead from their rest within the Infinity Circuit, but when a threat arises that the Aspect Warriors and Guardians cannot defeat, the Spiritseers will assemble a Ghost Warrior Warhost.

This collection contains all you need to field the Eldar Ghost Warrior Warhost Apocalypse Formation as featured in the Warhammer 40,000 Apocalypse: War Zone Valedor book. It includes: 3 Spiritseers, 2 boxes of Wraithguard / Wraithblades, 2 Wraithlords and 1 Wraithknight. The Spiritseers in this collection are a Citadel Finecast miniature, all the other models are multi-part plastic kits. The Dark Eldar are the masters of surprise attacks. Pouring out of the webway, the jagged shapes of Raiders and swarms of lighting fast Reaver Jetbikes plunge down through the atmosphere. They cut down the enemy, then vanish back into the webway before their victims even knew they were in danger.

This collection contains all you need to field the Dark Eldar Kabalite Stormsurge Apocalypse Formation. The datasheet for this formation is exclusively available in White Dwarf issue 15. It includes: 1 Archon, 3 boxes of 10 Kabalite Warriors, 3 boxes of 3 Reavers and 3 Raiders. The Archon in this collection is a Citadel Finecast miniature, all the other models are multi-part plastic kits. When the most potent synapse creatures in a swarm gather together they are the shadow in the Warp made flesh, and their mere presence is enough to unnerve the most heroic of warriors.

This collection contains all you need to field the Tyranid Shadow Incarnate Apocalypse Formation as featured in the Warhammer 40,000 Apocalypse: War Zone Valedor book. It includes: 1 Hive Tyrant, 1 box of 3 Tyrant Guard and 2 Zoanthropes. The Zoanthropes in this collection are Citadel Finecast miniatures, all the other models are multi-part plastic kits.

~Fasten your seatbelts, boys and girls, it’s shaping up to be a hot one as we head straight for 7th.

Author: Larry Vela
Dad, Gamer, Publisher, Pilot, Texan. All games all the time since junior-high. I started BoLS Interactive in 2006. I’m a lifelong tabletop & RPG gaming enthusiast, and internet publisher working to entertain and inform my readers every day. I've been playing RPGs and Tabletop Games since the 1970s. I'm been playing and covering Warhammer and Warhammer 40K for over 35 years.
Advertisement
Miniatures Rules Tabletop News Warhammer 40k
Advertisement 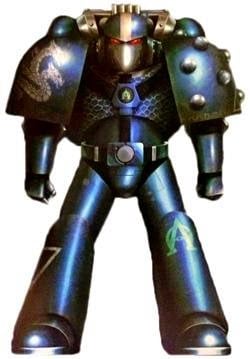