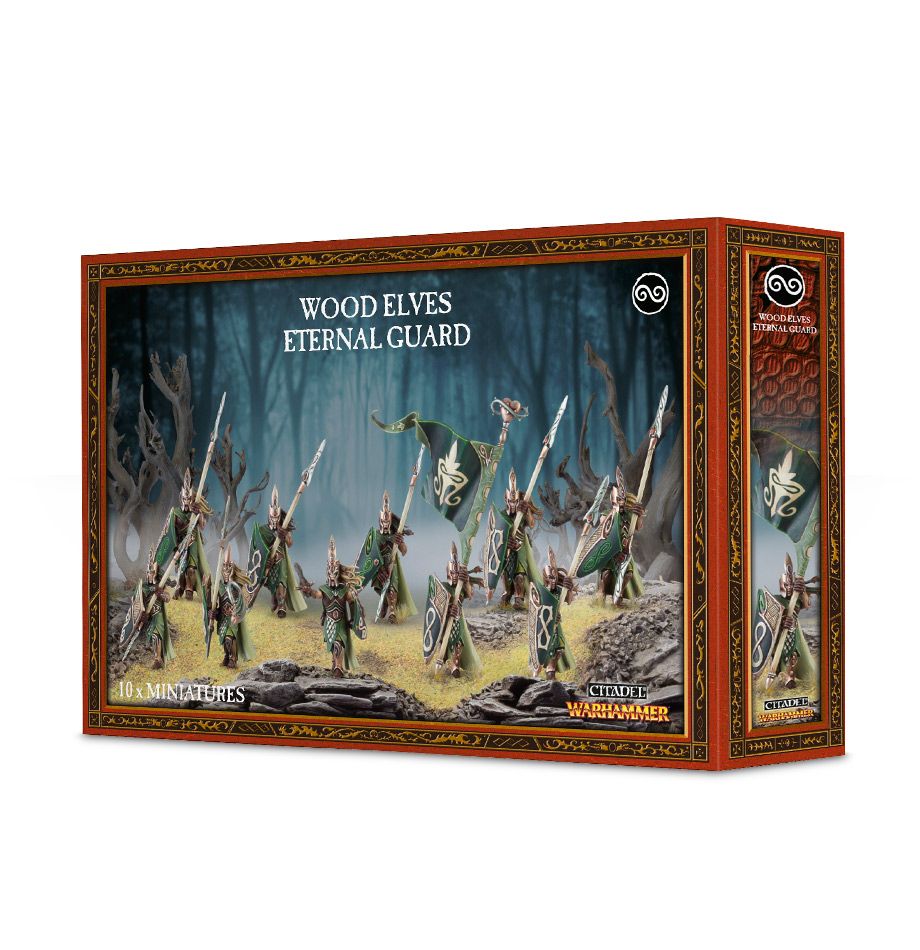 WFB Wood Elves Week 2 Miniaures are up for pre-order.  Check em out: The ever-vigilant Rangers patrol the waystone borders of the Wildwood – the home of the most dangerous and cruel of the forest spirits. When the waystone fences are breached, the Rangers hold back the tide of dark spirits with their formidable glaives.
This multi-part plastic boxed set provides all the components to make 10 hooded Wildwood Rangers armed with two-handed glaives – perfect for hacking down errant forest spirits. You can also make a command group with a banner bearer, a musician and a champion known as the Wildwood Warden. The Warden is armed with two hand axes and wears a crown of entwined branches.
The miniatures in this boxed set can be assembled as either Wildwood Rangers or Eternal Guard. Wild Riders are fey and dangerous creatures who serve as Orion’s personal guard. They are borne into battle on snarling steeds of Kurnous, which are as reckless and aggressive as their riders.
This multi-part plastic boxed set contains all the components to build five Wild Riders, each is armed with a staff and shield. You also have the option to make a command group with a banner bearer, a musician and a champion known as the Wild Hunter. The Wild Hunter is armed with a rune-engraved sword.
The miniatures in this boxed set can be assembled as either Wild Riders or Sister of the Thorn. Guardians of the Deepwood $230

Athel Loren is home to a host of powerful forest spirits. The benevolent Treemen are spirits that have entwined their essence with that of a living tree. These ancient creatures are revered by Elf and forest-creature alike, and the Treemen cherish all lesser creatures – they have a warmth of character that is wholly at odds with that of the Dryads.
Dryads are spiteful creatures that are able to shape-shift into different forms, often appearing as beautiful maidens. They possess no sense of compassion or mercy, just an uncompromising dedication to Athel Loren.
When the forest is threatened, both Treemen and Dryads rise up, savagely attacking all that threaten their home. The Guardians of The Deepwood boxed set contains 36 Dryads and three Treemen; that can be assembled as a Treeman, a Treeman Ancient or Durthu.

I have to say – quite the reasonable prices for these compared to past WFB new product pricing.  Gw may be backing away from the bleeding edge of pricing for WFB at least.