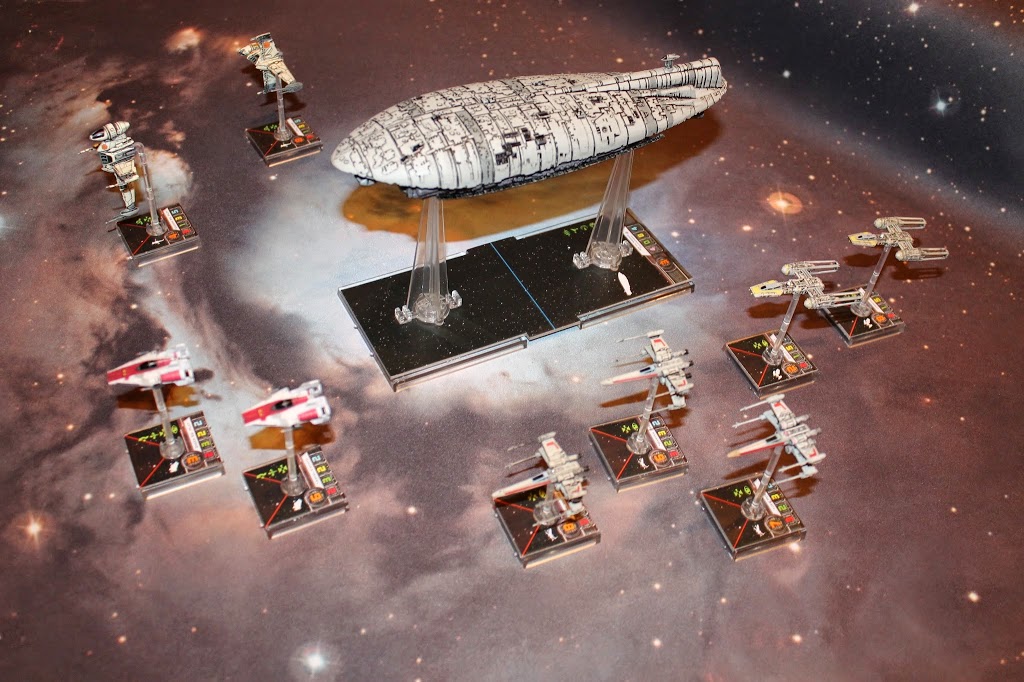 The X-Wing Huge ships are in your future. So are their rules – here’s how they work!

Right on, you’ve probably heard the Huge ship rules for X-Wing are available for download.  You also may have noticed that the GR-75 Transport hit stores last week and the Tantive IV Expansion is strongly rumored to be hitting stores soon as well.

As usual, reading my condensed take on this stuff should not be a substitute for reading the actual rules. Additionally, I’m not going to talk about every single thing regarding the Huge ship rules. A lot of this stuff is actually pretty close to the normal X-Wing rules with some tweaks and changes. I’ll mainly be focusing on those tweaks and changes and not the stuff you already understand.

Ok, so first things first- when can you use these Huge ships? In Epic play and in Cinematic Missions that allow ships with the Epic icon. Next big question- what’s the story with that monster Range template that goes out to Range 5?

Long story short- some of the Huge ship weapons specifically say they work out to a Range beyond three. If you’re packing one of those weapons, you get to use the monster range template. Don’t get too excited though- you know how when you fire a Primary at Range 3 your target gets another Defense die? Well he gets two when you shoot a Primary at him at Range 4 and three extra green dice at Range 5. Kind of a bummer, but keep in mind that just like in regular Small/ Large ship X-Wing, this only applies to Primary Weapons.
Speaking of shooting stuff, another interesting point about the Huge ships is that not only can they fire their Primary weapon as normal during their Combat Phase, but they can also fire any and all Secondary weapons assuming you’ve got valid targets. No mention of having to fire on the same target or any of that hoo haa. I’d also venture to guess this is why you can’t roll Crew Member Luke or Gunner- since you can fire more than one weapon, allowing you to reroll misses would probably be too much of an advantage.
As for what makes a valid target, if you look closely, you’ll see the Huge ships have firing arcs printed on their base inserts just like their smaller brethren, and in some instances even have weapons (both Primary and Secondary) with turret markings. As you’d expect, Turret weapons on Huge ships allow you to shoot at targets outside of the printed arcs. What works a little differently though is you measure from either the Fore base or the Aft base to the center of your intended target’s base. If that line doesn’t cross the blue line that sort of acts like an equator between the Fore and the Aft, you’re good to go and may fire when ready with that weapon from that particular section. If that line does cross the blue line, no dice. See the blue line in the middle of the ship?
Final note on Huge ships shooting at stuff- the CR90 (and possibly other Huge ships to be released in the future) has more than just one arc printed on its base(s). Secondary weapons in that particular section, and by section I mean fore or aft, must use those additional firing arcs when making their attacks. Now, I’ll be honest with you here- maybe my eyes aren’t so good, or maybe this doesn’t even really matter and I’m reading too much into it, but I don’t see what differentiates a Huge ship’s Primary firing arc from these Additional firing arcs. In any case, they call it out in the rules, so I thought I’d mention it. Maybe it’ll become clearer to me when we get the models and bases in our hands.
One thing I’m not entirely clear on is when exactly the Huge ships shoot. Not to completely spoil tomorrow’s article regarding Huge ship Maneuvering, Energy, Activation, and Actions (jeez- this may turn into a three-parter instead of just a two-parter), but Huge ships Activate after all the other smaller ships, regardless of those smaller ship’s Pilot Skill. They give this example in the rules-

Again, maybe I’ve missed it somewhere or I’m reading too much into it, but I can’t find any corresponding Combat Phase entry that explains when exactly the Huge ships fire. Maybe they just fire in standard Pilot Skill order like any other ship and it’s just the Activation Phase that’s different. Anyway, it’s a question that’s on my mind and I figure it’s probably on y’all’s as well, so I thought I’d throw that in there.
Now that we’ve talked about Huge ships shooting at other stuff, let’s talk about shooting at Huge ships and what happens when you ding one.
First, as you’d expect, when you attack a Huge ship, you’re either targeting the Fore section or the Aft section. If you’re coming in from the flank, the choice is probably going to be up to you, but if you’re more to the Fore or Aft, that blue line comes into play again if you’re aiming for the section that is further away.
Remember a few paragraphs back where we measured to see if a target was in a particular section’s firing arc by drawing a line from the attacking section to the middle of the target’s base? And if that line didn’t cross the blue equator we were good to go? Same deal here basically- the ship attacking the Huge ship does the same line measuring and if that line doesn’t cross the blue equator, you can attack the section you want (if it’s in range, in your arc, etc.). If not, you can’t. The actual Combat Phase portion of rolling to Attack, modifying, rolling to Defend, modifying is pretty well the same. Huge ships have a stock Defense of 0, but can gain dice through Crew Members, Upgrades, or obstructing Obstacles and whatnot it sounds like.
Should you manage to land some hits against a Huge ship, understand that some Huge ships have a separate Fore Pilot Card and a separate Aft Pilot Card, while some Huge ships just have a single card to represent the ship. This goes on to make something of a difference in the way Damage is applied.
For ships with a single card, you still have Fore and Aft Damage Decks, and as a ship attacking a Huge ship, you still target the Fore or the Aft of the ship with your attack. If you manage to land hits, you deal Damage Cards from that particular section’s Damage Deck against the Hull value of that ship just like when you land hits on any other ship in X-Wing. Stick a number of cards to the Huge ship in an amount that equals or exceeds the Hull value on the card, and it’s toast.
For ships with separate Fore and Aft cards, it works similarly, but as you’ve probably guessed, the Damage card instead gets stuck to the Fore card or the Aft card as determined by the location of your attack and therefore counts against that section card’s Hull value only. If you manage to equal or exceed the Hull value on that section card with Damage cards, then you’ve managed to Cripple that section of the Huge ship. This ends up being a pretty big deal.
When a ship has a section Crippled, the owner of the Huge ship flips over the section card to reveal the Crippled face. Crippled sections have less Upgrade slots than the regular, full-strength section card, and if the guy with the Huge ship has more Upgrades than slots upon the Crippling, he has to discard down to the new Crippled limit. Crippled sections also produce less Energy, so if he has more Energy tokens than what’s allowed under the new Crippled status, he has to discard those too. Titles and Modifications aren’t affected by Crippling and once a section is Crippled, it can no longer be targeted or assigned further damage.
If a Huge ship has both its Fore and Aft Crippled, it’s destroyed. All that said, Huge ships still observe the Simultaneous Attack rules, so while Face-up Damage effects are still in play once they’re applied, the Huge ship does get a chance to return fire on opponents before it’s removed from the game.
There are also a couple of mentions about damage that would affect both the Fore and the Aft are applied to one or the other as chosen by the Attacking player. I’m guessing those are Face-up Damage card text type effects, but again, not actually having seen any of these Damage Deck cards, it’s kinda hard to say. I will say I sort of don’t see how that could happen if it isn’t some kind of card text effect, which is what’s pushing me into that assumption.
Stay tuned for Part 2- Energy, Activation, and Actions and Part 3- Movement and Whatnot coming soon!
If you want to get into X-Wing Miniatures but don’t know your Evades from your Target Locks, by all means, stop on by the hippest pilot bar in the galaxy- TheMetalBikini.com. We serve all kinds (yeah, even droids- they’re the best tippers), and have a whole bunch of articles from breakdown summaries of every single card released so far, to tactics articles, to our Bikini Battle Basics new player guides- all served up with a heapin’ helpin’ of my own personal brand of slang and humor. Can you dig it? 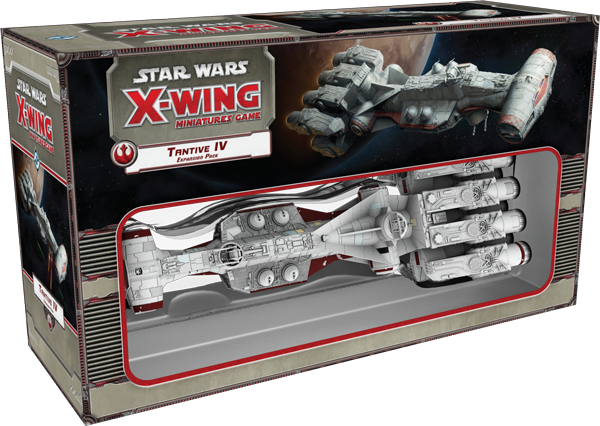