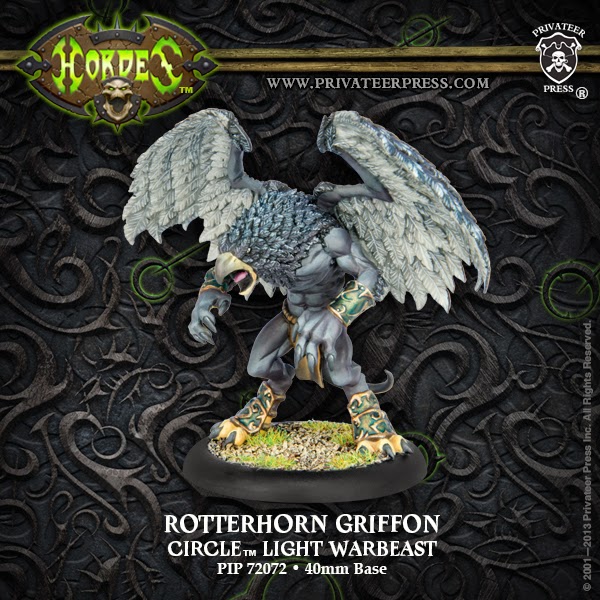 Earlier this month, Privateer Press released a new light warbeast to the Circle Orboros: the Rotterhorn Griffin. Let us take a look under the hood and see if it’s worthy of our attention.

Jumping right in and starting with the Rotterhorn’s mobility, at SPD 6 with Flight, the Rotterhorn can move around in a hurry, but without Reach, it is not going to have the longest of melee threat ranges. Those melee attacks are a pair of MAT 6, P+S 11 claws with the Open Fist rule, which isn’t terribly impressive either, even with Circle Orboros’s various melee damage buffs like Primal or Forced Evolution. With defensive stats of DEF 14/ARM 15 with 22 damage boxes, it can’t quite take a lot of damage either.

So, looking at the raw stats, it would be easy to dismiss the Rotterhorn pretty much outright, even at its cost of PC 4, but thankfully there is more to it. The special action Shrill Shriek causes all models within 2″ of the Rotterhorn to suffer a POW 8 damage roll. It is not blast or magic damage, just a straight POW 8 requiring no attack roll to hit. This makes the Rotterhorn a pretty solid tool against hordes of enemy infantry, particularly those that might otherwise be immune to blast damage, like Satyxis Raiders with the Sea Witch. Average rolling will net you kills on anything with ARM 14 or lower. Since Shrill Shriek is a special action, it cannot be performed as a part of a charge, so normal rules will limit its threat to a less-than-exciting 8″. You can also artificially extend this threat range by using a single Shifting Stone unit to teleport the Rotterhorn, giving it up to an ≈11.5″ threat with Shrill Shriek.

It is also worth noting that Shrill Shriek can, in fact, be boosted as well, increasing its damage potential quite a bit and giving you a solid way to remove troublesome high-DEF, multi-wound solos or officers that might otherwise be difficult to hit like Eiryss or even low-ARM warcasters or warlocks like Caine or Lylyth. While some might question the ability to boost the damage roll, precedent for not being able to boost has been clearly set with the Flak Field special attack that specifically states as such.

This, however, is where its animus comes in: Acceleration. This cost-2 animus allows a friendly Faction model to perform a special action at the end of its activation. This can allow the Rotterhorn to charge into combat, make its two basic attacks, then perform the Shrill Shriek action afterwards via the animus, effectively giving the Rotterhorn up to an 11″ threat with its POW 8 special action without the aid of Shifting Stones or other mobility boosts like Dog Pile, Warpath, etc. Do be mindful that Acceleration cannot be used after a run, since running immediately ends an activation and preempts you from doing anything afterward.

So, let us talk synergy and where you put a Rotterhorn. The first, and arguably most notable place, is in any army where you are planning on taking Una the Falconer. With her Specialization [Warbeasts with Flight], Una can take Rotterhorns for the bargain price of only PC 3. Additionally, she can increase the Rotterhorn’s threat range on Shrill Shriek via Dog Pile to give it up to a 13″ threat to enemy infantry. While Una’s control area is rather small at only 8″, the Rotterhorn will rarely need to force after it has moved provided it uses Acceleration, then charges forward, hypothetically out of Una’s control range. Sure, you won’t be able to leach Fury off the Rotterhorn unless you move Una forward, but it will most likely end up so far foward that it will die as a response. That may be a bit depressing, but remember, at PC 3, the Rotterhorn makes for a most-excellent trade piece.
Another good way to get solid value of Shrill Shriek is by artificially increasing its damage output, which Circle Orboros has in a few places, specifically their warlocks with Curse of Shadows, namely Mohsar the Desertwalker and Cassius the Oathkeeper, effectively making Shrill Shriek into a POW 10 special action.
In terms of using a Rotterhorn as a support piece through its animus, there are loads of fantastic places where Acceleration can be useful. Stonewards can use Acceleration to cast Zephyr twice in a single activation to move the Woldstalkers 6″ without actually using their normal movement, preserving the aiming bonus, pulling them out of melee range, and/or allowing them to move an additional 6″ for an absurd 22″ threat range. Alternatively, Stonewards can cast both Zephyr and Concentrated Fire to get the best of both worlds, both increasing threat range and damage output.
Baldur the Stonesoul can charge forward, lay into the enemy with massive melee attacks via Devourer’s Debt, then use Ritual of Renewal to avoid the damage incurred from the Wurm Tokens.
The Argus Moonhound can charge in, make its melee attacks, then use Hunting Howls to reveal nearby Stealth infantry.
Other decent interactions with Acceleration include anything having to do with most Druid solos and units. The Blackclad Wayfarer can advance, Stone Spray, then Phase Jump 12″ away to the nearest Shifting Stone. The Stone Keeper can both use Rock Hammer and Stone Form in the same activation. The Druid Overseer can use both Elemental Protection in addition to casting The Devouring.

Model-wise, if you’d like to get a good look at its components, check out Ben’s unboxing article from May. 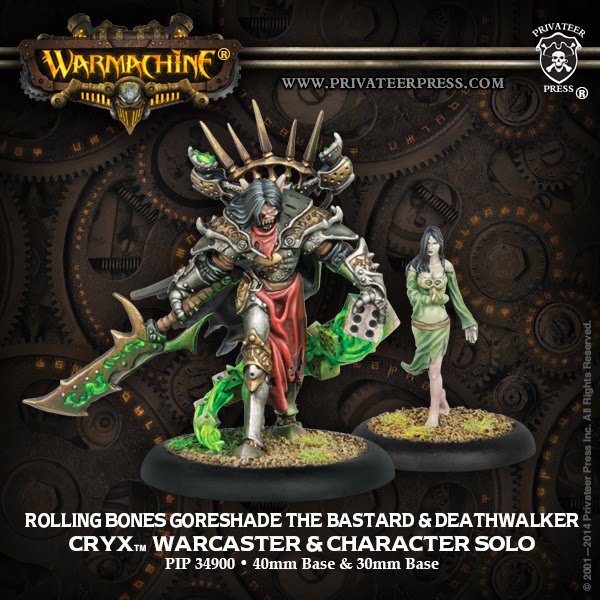