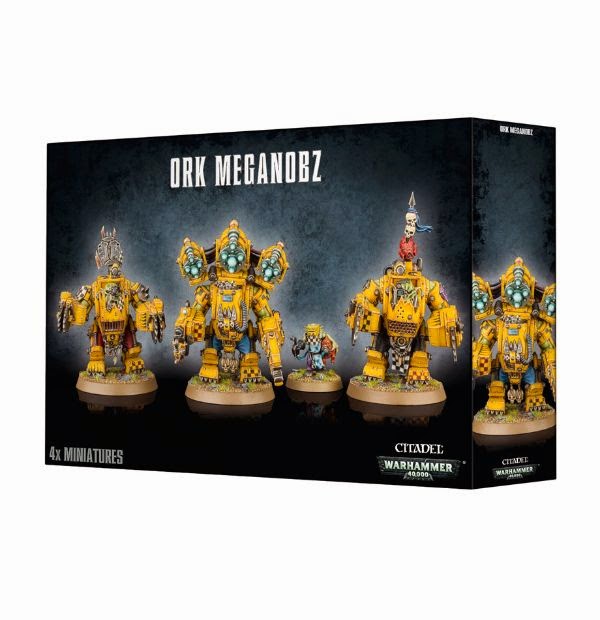 At very, very long last the Ork Codex arrives – in Week 5!  Go check out the 360s views of the Mega-Mek; that guy looks CRAZY! When Big Meks go to war they do it in style; festooned in massive mechanised contraptions of their own design and brimming with kustom dakka.

The Big Mek is armed with a kustom mega-blasta and power klaw (which is also functions are Mek’s tool for battlefield repairs). Your big Mek can also be equipped with a back mounted kustom forcefield or a tellyport blasta and comes with a Grot Oiler; a diminutive assistant that is mostly employed putting out fires or crawling into functioning machinery.

This multi-part plastic kit makes three Meganobz, one of which can be assembled as the Big Mek in Mega Armour. Waaagh! Ghazghkull is a supplement for Codex: Orks which expands upon the campaigns of the mighty Ork Warlord – Ghazghkull Mag Uruk Thraka.

This 80 page tome holds the details of the savage splendour of the most famous Ork invasion force to ever take over a planet. From the strange tale of how Ghazghkull took his first fateful steps towards his unlikely destiny as ultimate overlord of the largest Waaagh! in the galaxy, to the rules that allow you to arrange your collection of Citadel Miniatures into Formations and Detachments from Ghazghkull’s army.

If that’s not enough, this volume is packed with pictures of fantastically painted Ork miniatures and datasheets. There are also new Warlord Traits, a section devoted to Orkimedes’s Kustom Gubbinz, and Altar of War and Echoes of War scenarios that let you recreated Ghazghkull’s exploits. Battlewagons are perfect for smashing through enemy formations, with their killkannon booming the hulking spiked deff rollas grind all opposition into the ground. The Deff Dread Mob contains two multi-part plastic Deff Dreads. You get two face plates so you can give your Deff Dreads a distinctive look. Each also has two cockpit sights, five different close combat weapons, two big shootas, two rokkit launchas, two kustom mega-blastas and a skorcha. Plus there are loads of handy spares and other assembly options.
Trukk Boyz $60

The Ork Trukk Boyz set combines a mob of 10 multi-part plastic Ork Boyz with the multi-part plastic Trukk kit. You have the option to arm your mob of Boyz with sluggas and choppas or shootas. There are also the parts to assemble a Ork Nob (perfect for keeping da Boyz in line) armed with a big shoota and rokkit launcha.
Who’s buying what?