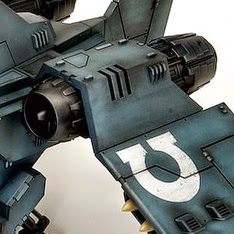 Today we bring you a Stormraven of Ultramar – maybe the best I’ve ever seen! Behold! There are still some people out there who don’t like airbrush work, but I’m certainly not one of them.  The number one feature of this model is the incredibly narrow and understated palette the artist chose.

The muted, subtle blue stands out from the cartoony blue we usually see the Ultramarines in, and grounds the piece, giving it a “real world scale-model” feel.  I could easily see this model in a diorama on a tarmac surrounded by maintenance equipment and crew.

I think the #1 comment I read on this model is a reader who said it reminds him of a Forgeworld Color Plate image brought to life.

Here are some comments on the project from the artist:

I wanted a very de-saturated blue, a kind of moody, cinematic colour instead of the bright shiny GW ultramarine blue. I was inspired a while ago by this guy, who is AMAZING! So that pointed me in the right direction but I ended up using different colours.

After that I added some lighter shades to the very small panels for variation added a dirty wash and some chipping. All the edges also got a rub-down with graphite to give that metallic feel. BRAVO – The work of an artist!

Author: Larry Vela
Dad, Gamer, Publisher, Pilot, Texan. All games all the time since junior-high. I started BoLS Interactive in 2006. I’m a lifelong tabletop & RPG gaming enthusiast, and internet publisher working to entertain and inform my readers every day. I've been playing RPGs and Tabletop Games since the 1970s. I'm been playing and covering Warhammer and Warhammer 40K for over 35 years.
Advertisement
Hobby Miniatures Painting Space Marines Warhammer 40k
Advertisement 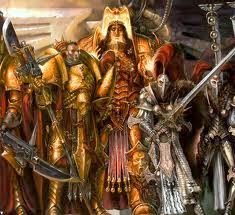