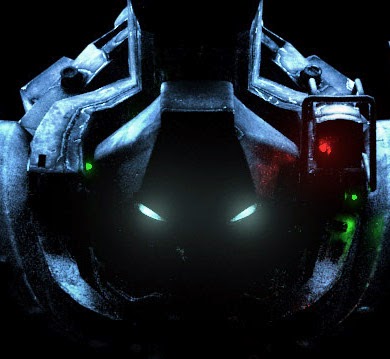 Its been awhile but its that time again, a solid update on The Lord Inquisitor movie, and this time its a brand new trailer featuring the Grey Knights!

The Lord Inquisitor, for those of you out of the loop, is a fan made 40K CGI movie created by Erasmus and a crew of animators and artists. It will focus on Inquisitor Coteaz as he battles against the forces of Chaos and the script is currently being worked on by none other then Black Library’s own Aaron Dembski-Bowden. It is the first fan made movie to be given a green light by GW, this means they are not supporting it or financing it, but they will not interfere or try and shut it down like Damnatus. This trailer was made entirely with the yet to be released CryEngine Cinebox and rendered in realtime.
Without any further ado, here is the trailer. Scroll down afterwards for a short interview with its creator.
Tyler: Can you tell us a little bit about how you created this trailer, from storyboard to final cut?
Erasmus: Sure – it all starts with an idea. So for this teaser I just wanted to focus on Grey Knights, so I knew it wouldn’t be a full packed trailer showing elements of the story and give away some spoilers. Also I knew that my resources would be limited again due to the fact that it will be just made in my free time. When I started this teaser the basic idea behind it was much simpler than it turned out, originally I wanted to just let the Grey Knight walk through a hallway and that’s it. But my ambition struck again and I wanted to spice it up a little with minimum effort and thought, how hard could it be to make an unarmored Grey Knight showing the black carapace and how he gets into his suit? I made a few tests and knew that I will have to do everything on my own on that specific scene, which later got called “Chamber scene”. My lead animator was busy working on the Witcher 3 and I also had no rigs for the new characters, so I quickly made my own. It wasn’t very good, but worked for the shots I had in mind. As if this wasn’t enough I decided to add 2 Servitors as well to give more awesomeness to the setting. I kit bashed them with old metal models I found on my HDD and for the organic parts I used the bloodletter’s body as the main body and chopped of the head replacing it with a modified head of Marcus, our main character. It was pretty much a Frankenstein procedure, but after one day I got my final Servitor model and started animating. I did around 5 to 6 iterations on the edit as it started simple and then progressed more and more. I assigned other people in the team with modeling the hallway scene, through which the Grey Knight is walking. That was good teamwork as I focused entirely on the Chamber Scene and the other guys on the Hallway Scene. As I had a good blocking and pre-visualization done it was time to lock the edit at some point and call that done. My team mates were polishing their assets and animations for the specific shots and I went over to the sound studio in the meantime to work on sound fx, which were very important for this teaser. Also, in a  different sound studio a voice actor recorded the famous Grey Knight quotes for me which I really wanted to have for that teaser. So a lot of people worked simultaneous on different aspects on the teaser: Art, Animation, Sound, Music and Voice. For me it was again difficult as I had to direct all the people so they knew what I wanted to have, but also I needed to model, light, and animate the biggest portions of the teaser. I admit that was maybe a bit too much work for one person, but in the end I’m happy that I went for the new character models, etc in order to get the level of awesomeness I had in mind for this teaser. And we were quite fast to be honest, this whole teaser from scratch took us a bit more than one month of work. The only thing that was done when we started was the Grey Knight suit and yes, that one took a long time to make as well.

Tyler: So we can assume that Grey Knights are going to feature heavily in the final movie?
Erasmus: They will be part of the movie, but they won’t be featured that heavily. Grey Knights are pure killing machines in this movies. I have to consider which characters to develop more and which not as I’m only able to produce a short movie. Grey Knights are pretty self explanatory.  Heavily armored dudes slashing demons, no need for further descriptions. Tyler: You have decided to do a shorter prequel film before the full length movie is released, can you tell us a little about that?
Erasmus: Well a full length movie was never an option, we would be speaking about 90 minutes at least. For a free time hobby CGI project in this high quality that’s impossible to create. I was thinking of a 40 minute movie and then also having a prequel. However, if you read other interviews that I already given, we had to cut things down again to a 15 minute movie only. The reason because is that despite the fact I could gather a rather large team, around 70% of it was absolutely unreliable. So I had high hopes that we could do a 40 minute movie together with the help of the others, but it turned out it’s not possible. I reduced the team to the reliable core members and we are going to make the 15 minute movie. This alone to be honest – when you know a tiny bit about CGI productions in this quality – is absolutely insane already to complete being a non commercial hobby fan project.

Tyler: What is the current status of the movie?
Erasmus: We had some good progress going but because of the cut of the main idea and the difficulties with the team we were thrown back. You can’t simply create a structure for a 40 minute movie and then convert it to a 15 minute one. You have to start again designing the core of it and then build up hopefully being able to reuse settings, animations, etc. Quality this high takes an enormous amount of time. We need fantastic visuals, story, music, sounds, etc and all of that will be produced for free in spare time. With the teasers we grew together as a team and the production becomes faster and faster as we have more experience.
It’s impossible for me to give an exact release date as it’s just spare time. Maybe an animator has crunch time at work, there’s no way he or she is going to work on  this project then in this time. Maybe somebody is sick, on vacation, etc. Millions of problems occur, stuff is not rendering, something is flickering, something else is broken, etc. I could go on for hours. But despite all the horrors a production like this brings with it, I’m still super motivated to finish this project. If I didn’t have a job being a Senior artist that also has great responsibility, I would be a lot faster  though. And luckily I don’t have kids right now, my only child is called Lord Inquisitor, and it’s already 4 years old.

Tyler: What can we look forward to in the future?
Erasmus: More updates, a final trailer and as usual a lot of insight into the project. I would really like to post a lot more images, but you can imagine that at some point I would have released the movie as still frames already over a certain time. So that’s why there are times where I have to be silent and just continue until certain other things start on which I’m working, that can be released on the Lordi page again so the fans see some new stuff.
And in order not to go crazy because of too much 3D / CGI stuff I’m also working here and then on a small side project that has nothing to do with computer graphics. I’m making a collaboration with a friend and I think many of Lord Inquisitor’s fans will be really interested in this – so more to come on that little project next year. I know people want me to work 24/7 on Lord Inquisitor, but sometimes I need to have a fresh mind again and work on something completely different for a moment.

Tyler: Now a little off topic, what is your favorite army in 40k?
Erasmus: As I basically have zero time to play the actual game, that’s a question I can’t answer based on my experience with the actual tabletop game, but that I can answer with my knowledge from the books. Many people know I don’t like Ultramarines and Orks ( as I’ve seen them way too often in 40k), but which army I really like is the Alpha Legion. In 40k I love the conspiracy parts the most and Alpha Legion is so badass in it – especially with the constant mind games of having two Primarchs and other marines that like to play their roles to confuse enemies. They are a fantastic addition to the universe and bring some fresh and interesting elements in the armies that only like to talk with guns.
Thats all for now, be sure to check out the Lord Inquisitor Facebook page for more frequent updates.
Are you excited for this movie or what?