SagasThey are now Warlord Traits like other armies with the difference that you can choose them without to roll dicesHQ UnitsLike 3rd Edition; One HQ per 750pLogan GrimnarLord of War, may take Two Warlord Traits, make Wolf Guard Packs to troopsRagnar BlackmaneWhen all Units in the detachment take Drop Pods as dedicated Transport, Ragnar will be free. Your Army may only take Unites with an Drop Pod option.Canis WolfbornNo longer in the CodexHarald DeathwolfNew Character, replace the generic Wolf Lord on Thunderwolf, make Thunderwolf Cavalry to TroopsBjorn the Fell-HandedNow a Lord of War, becomes “it will not die”. When Bjorn is destroyed every Space Wolves Unit within 12″ becomes furious charge, fearless and hate the unit, charakter or vehicle that destroyed himWolf GuardPack Leaders are now entries in the Units like Squad Leaders in other Armies. Still no teleport for TerminatorsGrey HuntersClose Combat Weapons are now a option that replace the Bolter, 5p cheaperBlood Claws3p cheaperLong FangsCan’t take Rhinos as dedicaded Transports GW comes out with a gaming terrain system to compete with the legions of new terrain tiles and such that are out there.  Six 2’x2′ ROB tiles for $330 One of a number of Tactical Dreadnought Armour sub-classes found within the ranks of the Iron Hands Legion, the Gorgon pattern was one of a number of on-going attempts by Ferrus Manus and his cadre of Iron-Fathers to refine and augment the various patterns of Terminator armour employed by the Legiones Astartes forces.

One of the most extreme technological examples of the Iron Hands’ innovation to improve on these designs was the hazardous but powerful ‘Gorgon’ prototype, which required bonding to its wearer, and which Ferrus Manus would not live long enough to refine to its full potential.

The Iron Hands Legion Gorgon Terminators are a complete multi-part resin kit, designed by Israel Gonzalez. This kit is available to pre-order now and will be despatched from Wednesday 30th July. And from the Forge World Open Day, come these new releases: (More on this later today) The Primarch Vulkan Model, which we saw back in May, but is still impressive regardless. The newest big baddie on the block the Tyranid Dimachaeron! This guy is the new “featured” baddie in Imperial Armor IV The Anphelion Project since the first big bug they featured in there, the Trygon, is now a plastic kit.

The Horus Heresy is getting the possessed Gal Vorbek model. A Horus Heresy Video Game coming from Complex Games, and here is what we know so far:

via Complex Games:
Advertisement
“We’re excited to announce what we’ve been working on, an all-new Warhammer 40,000 tactical strategy game called The Horus Heresy: Drop Assault for iOS and Android. It’s the first ever game set in the Horus Heresy story. We’ve been huge Warhammer fans for years, so working on this game has been a truly great experience. You’ll be able to play Drop Assault this fall. It contains 49 snap-fit plastic miniatures that make two unique forces: Dark Angels and their hated foes the Chaos Space Marines of the Crimson Slaughter. It also contains a small-format paperback edition of Warhammer 40,000: The Rules, along with a complete assembly guide, a quick-play reference guide, a datasheet for the Chaos Space Marine Aspiring Champion and an army roster sheet. There are also dice, templates, and a how-to-play booklet that includes six scenarios to enact on the tabletop.
The Dark Angel force boasts a Company Master armed with bolt pistol, power sword and combi-weapon, a Librarian who carries a bolt pistol and force sword, a ten-man Tactical Squad, a five-man Deathwing Terminator Squad and a three-man Ravenwing Bike Squadron.
Opposing the Dark Angels is the Crimson Slaughter. The Chaos Space Marine force includes a Chaos Lord – armed with power sword and plasma pistol; a Helbrute, armed with multi-melta and power fist, an Aspiring Champion and six Chosen. They stand alongside twenty Chaos Cultists who carry a combination of ranged weapons such as autoguns and close-combat weapons. The Realm of Battle: Ultima Quadrant set includes the Sector Imperialis gameboard which is a high quality, plastic, modular gaming surface for Warhammer 40,000 plus two Imperial Sector scenery sets (each of which includes a Sanctum Imperialis, Manufactorum and a Basilica Administratum). Plus a Shrine of the Aquila, two sets of Quake Cannon Craters, a Fortress of Redemption, a Skyshield Landing Pad, two Imperial Bastions and a Honoured Imperium. This set contains: 1 Kaptin Badrukk made in Citadel Finecast, 10 multi-part plastic Flash Gitz and 6 Citadel Finecast Ammo Runts, four of which are brand new to this set.

Be safe out there. 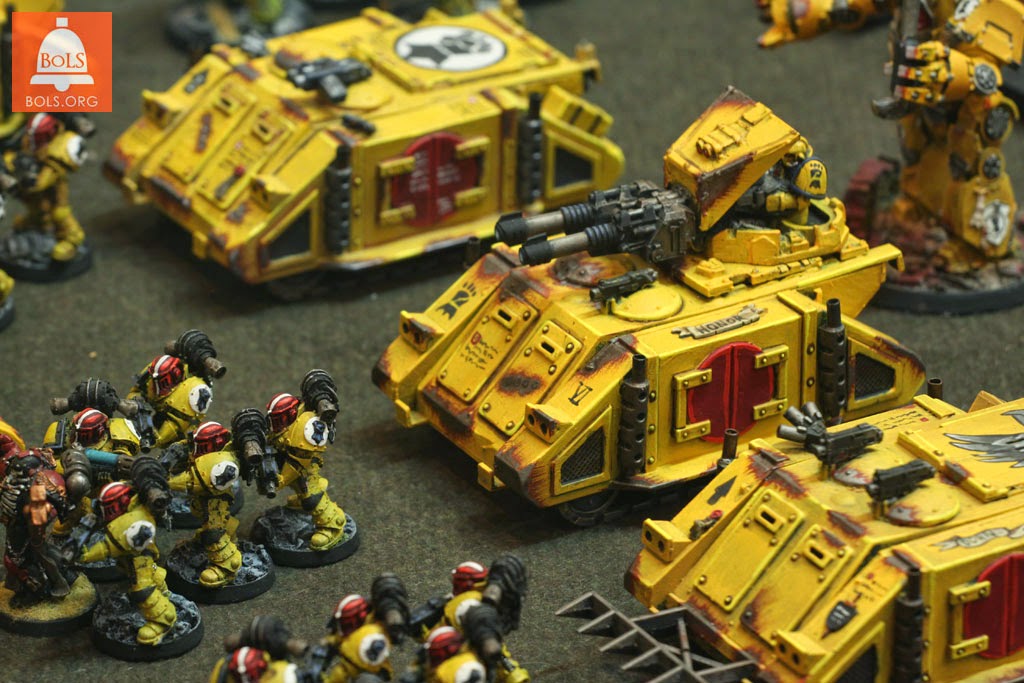