FoW: Setting up Infantry for Defence vs Tanks. 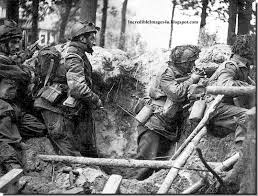 Hi All Coxer here from Breakthrough Assault, this time I’m talking tactics, and how you can set up your infantry to defend an objective.

This can never be a comprehensive article as terrain/opposition will always shape your deployment, but there are a few simple tips and tricks which can help.

Infantry in front of the objective

When you place your infantry to hold an objective there are a couple of things I like to consider. The first is that I like to have them at least 4 inches forward of the objective from where the likely assault will come – if the platoon is big enough spread out in multiple directions for any flank attacks. The reason for this is that at 4 inches you still contest the objective, but more importantly, if you break during combat and fall back you’re still contesting the objective.

The other thing to consider is spacing. Whilst gun teams can shoot over stationary non shooting infantry, other infantry teams need an inch gap to shoot through. Alongside this you have to consider artillery, having as few teams under a template as possible reduces damage; conversely as you only get defensive fire from models within 8 inches from those contacted in assault you don’t want to be too spread out as you won’t be able to bounce the assault. Personally I aim for around a 3 inch spacing, enough to avoid lots of damage from artillery, and still be concentrated for defensive fire

Infantry anti tank weapons
For this I’m referring towards Panzerschreks, PIATs, Bazookas and Anti-Tank Rifles. These are infantry based weapons, so don’t count as gun teams -and as such fight as ‘regular infantry’; they have two advantages, the first is they can add to defensive fire and damage tanks (you need two effective hits either destroyed or bailed to stop them assaulting you). The other advantage is that in assault they often have a higher tank assault rating so are more lethal. When deploying them as part of an infantry platoon I place them about 3 inches behind the front rank of infantry. This allows them to take part in defensive fire, but more importantly, when the enemy tanks hit, they are not within 2 inches of the assaulting team, so not a viable casualty to be removed – and of course if you then pass your motivation test to counter attack you’re able to move these damaging weapons into assault range.

Anti tank Guns
These are your. 6pdrs’s Pak 36/37/40 etc.  These are gun teams and as such ‘fight or die’ basically in combat if they lose the combat they are dead. As such it’s helpful to have the infantry in front of them, but it’s also useful to have them within 8 inches of the front of the front rank of infantry bases to help with defensive fire (as a side note this works for HMG’s vs infantry)
So what does this look like in practice? Well here is a rough example with my British para’s – rifle/MG teams up front and round the sides, PIAT’s in the centre and 6pdrs at the back, ideally 2 are in range of any infantry team.

So I hoped this has helped any of you when considering how to defend an objective, as you can see from my examples, there is no terrain, no other supporting units – just far too many options to consider, but if you have any great defensive tips or tricks you’d like to share please let us know.