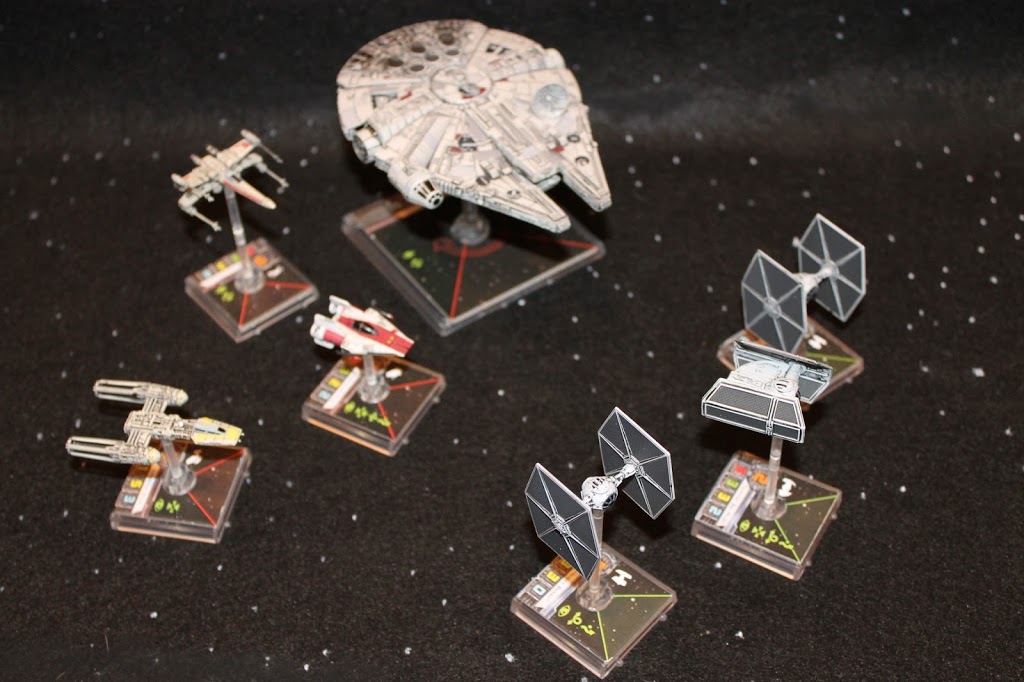 Mastering pilot skill can make or break your X-Wing Games.  Here’s what thou need to know:

Another installment on listbuilding principles for X-Wing Miniatures, today we’re going to talk a little about Pilot Skill and how it interacts with the core rules of the game and repercussions for going with high PS, low PS, or a mix of both.

Pilot Skill is another of those X-Wing Miniatures subtleties that takes folks a few games to get their head around. It’s not really that noticeable if you start playing X-Wing with a bunch of other new players around the same time, but a new player against someone who has a bunch of games under their belt and a firm grasp on PS? It’ll likely be ugly, but maybe not quite apparent as to why exactly.
So Pilot Skill is the orange number on the left middle of a pilot card. There are several schools of thought out there regarding Pilot Skill and whether you want low PS or high PS, but it really just kind of depends on what you’re trying to do with your list, so I’ll just kind of address this in generalities and let you decide as you go along.
First though, we’ve got to understand some core rules governing Pilot Skill.
Coming from games like 40k where essentially any unit can activate in any order the controlling player chooses to a game like X-Wing takes some adjustment. Even coming from a game like AT-43 where you had some semblance of a Pilot Skill-ish order is still fairly different in actuality. Now, I don’t play a ton of miniatures games like some of y’all, and I never played Wings of Glory that X-Wing is fairly based on, so maybe this is kind of a novel thing to me and me only, but as X-Wing seems to draw in the casual crowd, I kinda doubt it. With the Pilot Skill game mechanic, the order in which your ships activate is determined and isn’t entirely up to you. Essentially, and I’m breaking it down a bit here, there are two phases of the game where Pilot Skill comes into play and consequently, they’re the two biggest, most important ones: the Activation Phase and the Combat Phase.
In the Activation Phase, when you move your ships and (hopefully) Perform Actions, ships take turns based on their Pilot Skill in ascending order- that is, if there’s a Pilot Skill 1 pilot and a Pilot Skill 8 pilot, the PS 1 pilot will do his thing before the 8. Again, this doesn’t seem that significant until you’ve played a few games and realize that much like arithmetic, the order in which things happen is pretty damned important!
Say a couple of pilots are faced off and both select a maneuver that will make them collide with their opponent. The guy with the lower Pilot Skill will make his maneuver and (probably) his Perform Action step without penalty. The guy with the higher PS will (probably) not- as he’ll be the one that Overlaps his opponent, the high PS pilot will be the one to lose his Perform Action step. Because of this rule interaction and the prevalence of the TIE Swarm (especially back in the Wave 1 days), a lot of players would purposely try to choose lower PS pilots and indeed, there were many messageboard threads all over the internet talking about how high PS pilots weren’t worth it- card text or no, because of the above paragraph.
That said, there is an advantage to taking high PS pilots over low PS pilots. While the lower PS guys move first, when the Activation Phase draws to a close and the Combat Phase begins, everything changes and the ships take their turns in descending order with the highest PS ship going first and the lowest PS ship going last.
While there are rules for governing ships firing on each other at the same PS (which are a little outside the scope of this article as is Initiative) , for the most part, the advantage to be gained by fielding high PS pilots is that if you do manage to turn an enemy ship into dust with a high PS pilot, in all likelihood, that ship didn’t get to fire back on you. So which one should you pick?
Well, as we mentioned before in the Quantity Over Quality article, for the most part, the cheaper guys that you can field more of are going to be at a lower Pilot Skill, so in general, going with low(ish) PS pilots won’t be that bad if you get used to the idea and by that I mean building and flying your list accordingly.
For me what works best with lower PS pilots is flying them fairly aggressively, causing collisions with the higher PS ships when they move, or maybe scaring them into making less than optimal moves for basically the same reason. With the higher PS guys, I try to hang back a bit, to avoid invoking those collisions and making the most of my card text and Actions. Just bear in mind that a lot of ships in X-Wing do have the option to do some moving after their maneuver- Barrel Rolls, Boosts, Daredevils, and the like,so higher PS pilots aren’t exactly hammering down on the gas pedal uncontrollably while they crash into a brick wall. Many of them have more than a few tricks up their sleeve to avoid collisions- especially the Imperial ones.
The Pilot Skill mechanic also has a profound effect on target priority in X-Wing, because again- you can’t just decide to shoot with any old ship you want, when you want. Your high PS guys are likely to be guys with some cool card text abilities, but oddly enough, they’ll probably just be softening the targets up for the lower PS guys to finish off, at least early in the game, as they’ll be the ones shooting first and eating up Evades and Focus tokens, and hopefully Shields and Hull as well.
Again, reading about this Pilot Skill business it doesn’t sound like that big of a deal, but I promise you there are some big time effects on everything from the aforementioned Activation and Combat Phases, but also in how Named Pilot’s card texts interact. Take for example Garven Dreis- Sounds like a cool ability, and it totally is- you just have to bear in mind how all this goes down. One of my regular opponents ignores Dreis for the most part because if Dreis can’t spend that Focus token, he can’t hand it off, right? So especially when he’s fielding a high PS Imperial list with a low ship count, he just doesn’t interact with Dreis at all unless absolutely necessary. If you put Dreis in a squadron with higher PS guys like say for example Wedge and Luke, that Focus token is likely only going to be passed to them on defense at best because those two have already taken their shots since they fire before Dreis in the Combat Phase.
On the other hand, if you use Dreis with a couple of Rookie Pilots (Pilot Skill 2) instead, Dreis will shoot before them, which hopefully lets him use that Focus Token which he can then pass on to either of those guys for possible use on offense or defense. Again- it’s little stuff like that, but it can make a difference if you’re flying Dreis to his potential or if you just overpaid for what’s basically a slightly higher Pilot Skill Red Squadron X-Wing for 26 points.
So if you’re just starting out and all this is kind of a lot to keep track of, or if you’re more serious and want the maximum amount of flexibility, you might try fielding pilots that are the same (or very similar) Pilot Skill a try. If you own a couple of guys at the same PS, you can choose to Activate them in any order you want, and what’s better is you can then run through the Combat Phase in any order as well. This mitigates a lot of the headaches associated with learning Pilot Skill, which can be kind of good and bad in that it’s sort of a crutch, but if you’re on a long losing streak and don’t feel like you’ve ever got the right guy shooting at the right target, maybe give it a whirl and see how it does for you.
If you want to get into X-Wing Miniatures but don’t know your Evades from your Target Locks, by all means, stop on by the hippest pilot bar in the galaxy- TheMetalBikini.com. We serve all kinds (yeah, even droids- they’re the best tippers), and have a whole bunch of articles from breakdown summaries of every single card released so far, to tactics articles, to our Bikini Battle Basics new player guides- all served up with a heapin’ helpin’ of my own personal brand of slang and humor. Can you dig it? 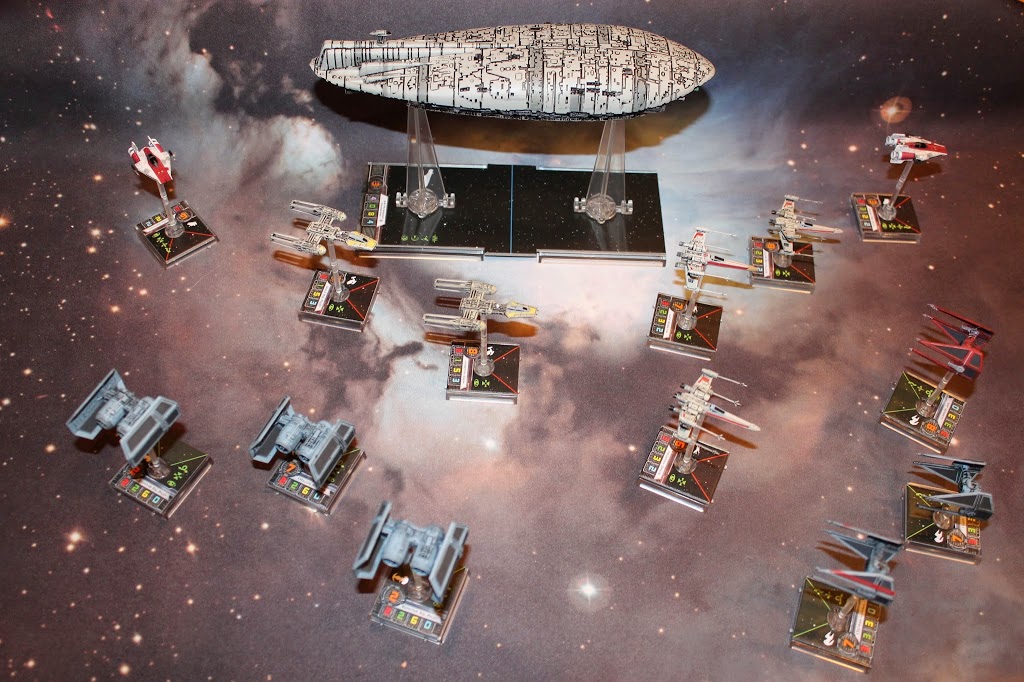