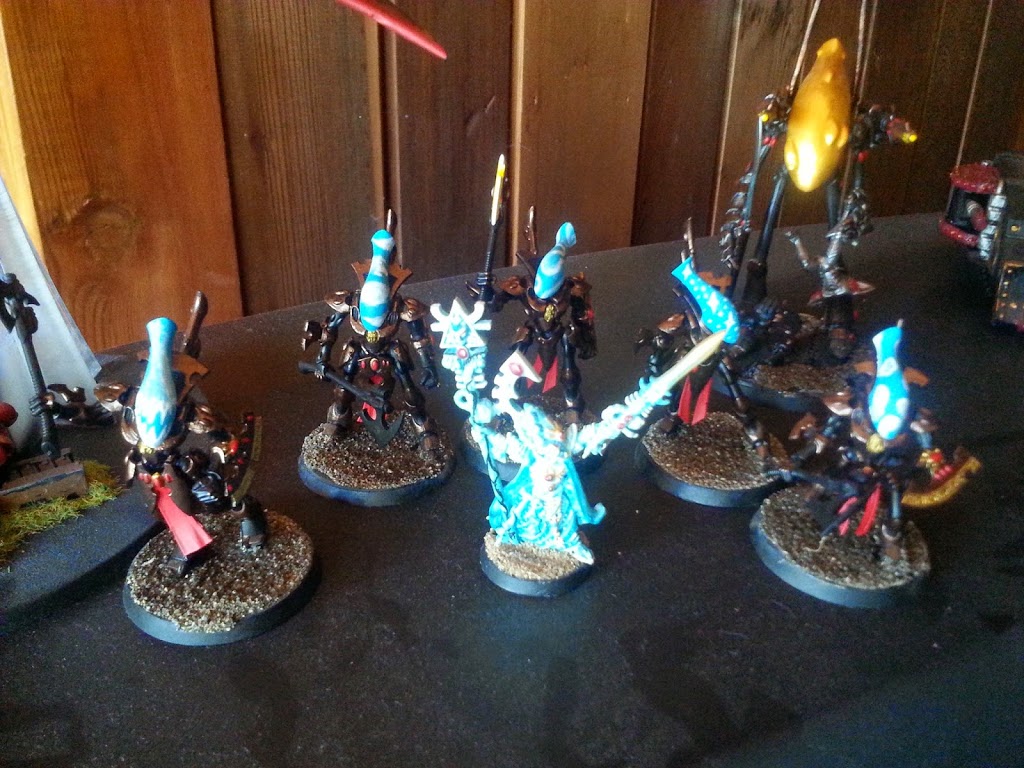 One of the single greatest things about this Hobby is getting all of your gaming buddies together in one place, at the same time.

Hey Folks! NoName1 here to, once again, talk your ear off about Warhammer!

No, it wasn’t “The” Warhammer Weekend. It wasn’t a huge, GW funded epic event – this was our little, home-brewed, dozen-strong camp out, throw down, three-day weekend of gaming. And we loved the crap out of it.

So, without further ado, let’s get to the pictures! First off, a quick warm-up game with the first arrival: Ultramarines, led by Chief Librarian, Varro Tigurius himself! This game was long-table, and some time ago so we were still playing 6th. Custom Objective Marker, and a unit the Ultramarines brought to the table with much hemming and hawing as to whether or not they were worth it So…  Many…  Drop pods…  (to kill the suspense here, this first game ended in a draw – almost entirely because it was my first game against Grav Centurions and they mulched my poor Wraithknight) Above in this picture is a much-later game between the Ultramarines and some unusually painted Dark Angels. Four player game – Daemons and Necrons vs. Dark Angels and Blood Angels. This one was *ugly* and went long into the night. It also ended in more or less a draw. Impromptu Hobby tables popped up all over the house, exactly as it should be! A particularly good shot of an epic Drop Pod arrival. I know it looks like Dangerous Terrain, but we figured it was so cool we’d let it slide. Here’s a short break, people trying out a little Skirmish game to break up the Warhammer. Prepping for yet another game! Bits, bits bits and buns! This was between games, just showing off the chaos of models on all surfaces. A particularly good example of a pop-up paint station. Many props to the Ultramarines for their classic utilitarianism in all situations! And of course, there was a dog. There always has to be a dog, although she was kept far, far away from anything chewable More mobile painting, but also here’s a grudge-match showdown between the Tau and the much-feared Death Company Blood Angels Very somber looking Death Company Blood Angels. Who were badly beaten in this game – which was a fairly drastic upset, our local Blood Angels are nearly never beaten! A quick look at the Tau gunline – this army belongs to the oldest veteran among us, but who has had SO MUCH to paint that it’s taken him ages to get through it. You should see his Orks! But you won’t see his Orks here, because he didn’t bring them He did, however, bring his sweet in-progress gaming table! This was ugly. Never, ever, EVER, assault Daemon Princes with Wraithblades. Especially if you didn’t roll Fortune.
However, I’m pleased to report, Eldrad survived this melee (as seen in a picture on another post) and managed to Instant Death one of those evil buggers. To close, here are two pictures of my in-progress custom Farseer, which I already posted as a more or less finished product here. And that’s it! I hope you enjoyed a picture-heavy post for once.

Just a little showcase, and a quick reminder that all of us should, once in a while at least, get all our gaming buddies together and do a gaming camp-out!

Author: Noah Hallett
Noah is a tabletop wargamer with a decade of experience. His specialty is Warhammer 40,000. He began writing for BoLS in 2014.
Advertisement
Community Warhammer 40k
Advertisement