Grey Knights: Is it All Bad? 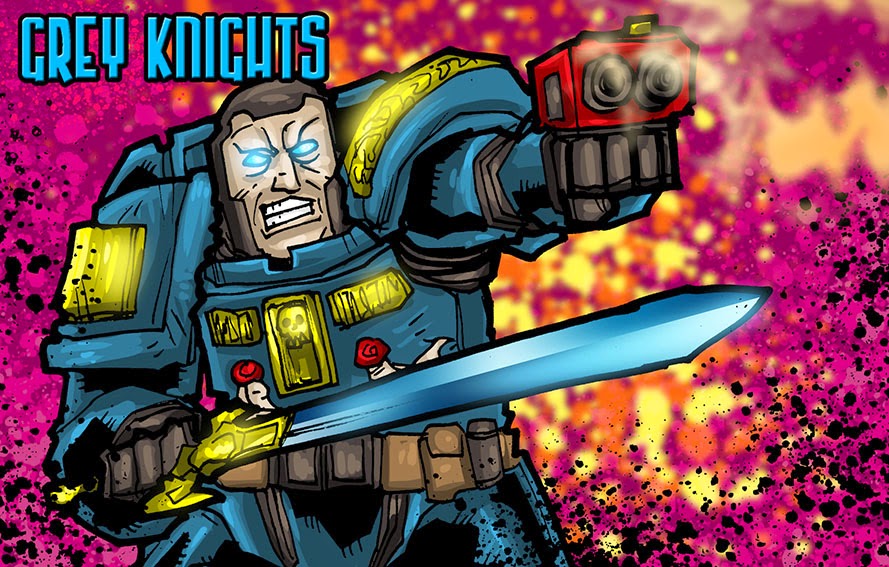 Hey everyone, Reecius here from Frontline Gaming to talk about Grey Knights and trying to see the silver lining.
Check out the Tactics Corner for more great articles!
So, all you dedicated Grey Knight players out there let me preface this by saying, I feel your pain. It is tough to open a new Codex for your favorite army, full of excitement, and then feel let down when you see things taken away or nerfed. So, no judgment here. I felt the pain with my Nids.
But, as with Nids, if you hang in there and can look past what you’ve lost to hopefully try and see what you have, you can have fun with your army again. I am loving my Nids now, particularly with the awesome formations and FW models such as the Malanthrope that have just been great fun and give Nids the boost they needed. So Grey Knights players, in the short term, vent away, but try to keep an open mind and stay positive.
For one, I think the Nemesis Strike Force Detachment is just fantastic! Building an army into this Detachment I think will give you the tools to make a good, fun army to play. I am not saying it’s the ONLY way to play them by any means, just what jumped out at me. This detachment will make for incredible allies (just the HQ and troop alone buff Astra Militarum significantly, not to mention Draigo!), but if you want to play it just as Grey Knights I think you still can quite effectively.
You lose ObSec in the Nemesis Strike Force detachment, but, you gain something pretty awesome. You gain the ability to reserve your entire army and start coming in via Deep Strike turn 1 for those units arriving that way. The turn they arrive they can even shoot and then run or run and then shoot! That may not sound like much, but, it is pretty fantastic as it allows you to recover from a poor scatter and/or to get out of blast/template formation without sacrificing your shooting. Ideally, it allows you to land, shoot and then scoot into cover. Not bad at all. Actually, fantastic!
This detachment also gives you the option of only taking a single troop, and up to 4 Elites which is great as we will get to in a minute. Lastly, you do only get 2 Fast and Heavy choices, which stinks, but I think it is a fair trade for what you get. I would build a list around this detachment. You want a beta strike list that always goes nearly full reserves for an essentially null deployment. You also want to almost always go second. The reason being, that you can essentially “steal” a turn of shooting away from your opponent AND get last chance to take objectives. In most missions, that is very powerful.
From there, you build a list around hard hitting units that can pack a wallop the turn they come in, and then engage in melee to deliver a death blow. It is a gambler’s army for sure, but, a lot of fun.
As for army composition, I would look to units that both do a lot of damage with psychic powers and shooting AND can then fight in combat. Cleansing Flame is a brilliant Nova power (WC2, 9″, S5, AP4, Assault 2d6″, Ignores Cover, Soul Blaze) particularly when you consider how much damage it can do on a unit arriving via deep strike. To any unit with a 4+ or worse save, that is devastating. To units with a save, it is still very powerful with the ability to hit multiple units. This couples well with an Incinerator with its close range, Strength 6 ap4 stat line. This qualifies Purifiers as a great unit to deliver a lot of hurt. Taking 5 with 2 Incinerators and a Hammer only runs you 145pts. That is not a big price tag for a unit that can deliver a heavy blow into the enemy backlines. I would consider taking 2-4 of those. (Note: Purifiers don’t actually have Deep Strike, doh! Sorry for the confusion.)
For me, there is no reason to pass on Draigo now as he is just the Warp Dust sniffing champion of butt kicking – again. My Goodness, he is a beast. Easily one of, if not thebest, melee characters in the game. At a very reasonable price tag it is more a question of why not take him? For me the only question is how to deliver him and in what unit?
He would fit well with Terminators who got a great price drop and still pack a wallop while also filling your troops slot. He would also go great with Paladins who also can further buff him with their Apothecary and Bro Banner.
Either way, you can either deep strike the unit or put them in a Land Raider where they also anchor your army against the off chance that none of your units come in from reserves on turn one. You slap a teleport homer on a model inside too, and you now provide some accuracy to those units coming in from deep strike in later turns, as turn 1 they will likely want to arrive too far away from the Land Raider to make it worthwhile. While the Land Raider has its ups and downs, it does make the unit more reactive and mobile as well as provide you with some additional firepower.
If you do choose to have your hammer unit come in via deep-strike, I would consider taking an Interceptor Squad which will often start on the board to anchor your army and possibly man a Comms Relay to give you 8/9 units arriving turn 1 as opposed to 1/3 odds, or to decrease the amount of units arriving from reserves if you want to keep them off of the table. The unit can then shunt into position to support the rest of the army once they have arrived. They also provide some valuable mobility. Units that arrive via deep strikes can struggle against speedy armies after they’ve landed.
Dreadknights got a big points discount and IMO, should be present in every list. They pack a punch and come stock with Deep Strike, which works well in this detachment. I would take 1-2, for sure. You can keep them dirt cheap, or beef them up a bit to serve your needs. I would take the Greatsword and either an Incinerator or Psycannon to give him some ranged bite, and strongly consider the teleporter to keep him mobile. That said, there is a good case to be made for the barebones Dreadknight at a bargain basement price!
A Stormraven for AA is a bit pricey, but, it serves the purpose well and it provides some mobile AT as well. Keep it cheap, no or minimal upgrades, and it will serve you well to counter aerial threats and tanks.
Lastly, in HQ you have a lot of solid options. I am drawn to Crowe quite a bit for his reasonable price point and versatility. He has Cleansing Flame, is quite powerful in a challenge and can now join units. However, the Brother-captain and Librarian are also quite good.
Nemesis Strike Force
Draigo
Brother-Captain: Cuirass of Sacrifice, Psycannon
Terminator Squad x 10: Psycannon x 2, Hammer
Purifier Squad x 5: Incinerator x 2, Hammer
Purifier Squad x 5: Incinerator x 2, Hammer
Stormraven: M.Melta
Interceptor Squad x 10: Incinerator x 2, Hammer
Dreadknight: Heavy Psycannon, Teleporter, Greatsword
Aegis: Comms Relay The downside here is, obviously a really low model count. Like, really low! The game plan though, is to have pretty much all of your units deep strike in bottom of turn 1 off of the comms relay manned by the Interceptors (who can Combat Squad as needed) who then shunt forward to join their brothers.
They army hits hard, hopefully weathers the counter attack, and then wades into melee with the hammer unit of Terminators+Draigo+Brother-Captain. That unit has enough punch to take on damn near anything and they shoot well, too. It can also combat squad as well, if you feel you need the extra unit or to create two powerful melee units. The Purifiers take on light infantry and vulnerable units and the Dreadknight goes where needed. The Stormraven gives you aerial defense and mobility as it can swoop up a unit that finds itself out of place.
If you find yourself playing interceptor heavy Tau, just save yourself some time and buy a beer, lol, but in general terms the army can pack a nasty bite for so few models and would be very fun to play. If you find yourself up against a barrage heavy army that can smoke your Interceptors early, just deep-strike them, too and take your chances. You can also beef up your model count by dropping Draigo and the Stormraven to take more units to give you more durability, but, you leave yourself open to powerful melee units and aerial threats.
Point being here, that if you are diligent and try to see past the kick in the nuts of what you’ve lost, you can hopefully find a way to enjoy your army!

Author: Reece Robbins
Reece Robbins, is one of the most respected names in tabletop gaming. He founded Frontline Gaming and the largest Warhammer 40K tournament in the world, the Las Vegas Open. Reece has been playing competitively and covering Warhammer since the 1980s. He has won major events including Adepticon.
Advertisement
Editorials Grey Knights Warhammer 40k
Advertisement 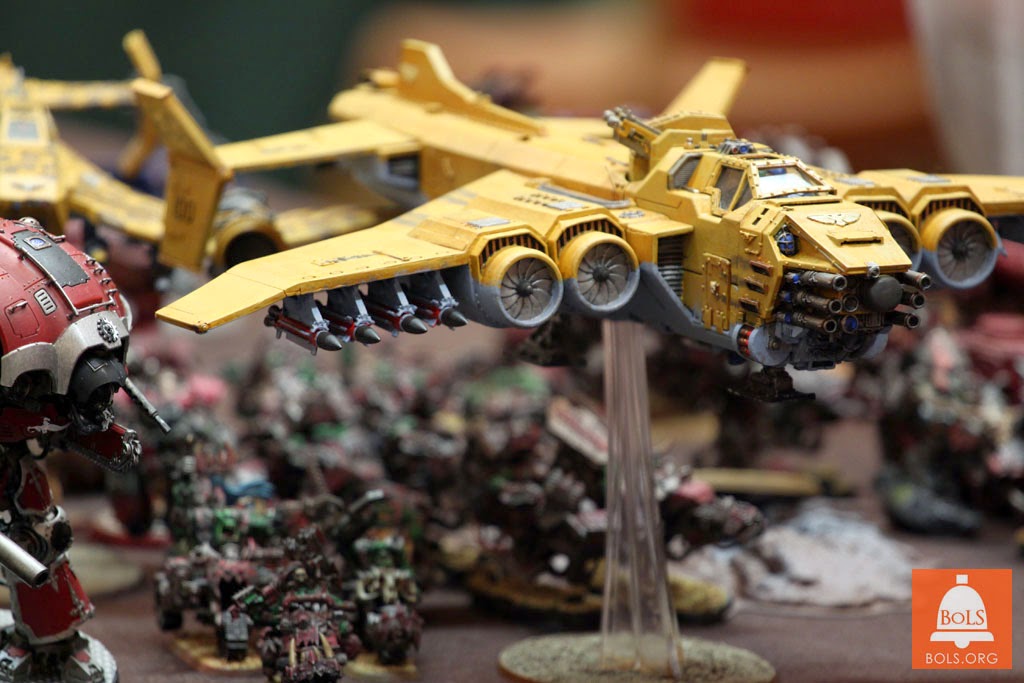