No, this article isn’t about the call of the dark gods, sorry if I mislead you. Instead it’s about embracing the crazy, whacky nature of the models we sometimes see for 40k and Fantasy. When the new Logan Grimnar model came out the majority of what I heard was how ridiculous the “space sleigh” is. Yes, the knee-jerk reaction might be how out of place it is, but is it really? This is a universe where 12 foot tall demi-gods conquered an entire galaxy for their tyrannical, immortal father. Personally I like the model a lot. It is a little over the top but in one year we won’t blink an eye at it. Not because there will be crazier models (though I’m sure there will be) but because we will have gotten over our need to protect and hold onto what we “think” 40k should be.

My favorite era of 40k was late 3rd edition. It was very gritty and realistic. If you look further back though to 2nd edition and Rogue Trader everything was whacky and off the wall. It’s only because I missed that era that the gritty 3rd edition seemed like the “true” version to me. Luckily I have grown past that and fully embrace what 40k is becoming. I’m not going to lie, there was some aversion at first, I didn’t want it to change. Slowly though I accepted  that GW was reaching back to its roots. Most of what we consider newer lore is actually just older lore that had been left by the wayside for a few editions.

At the moment Games Workshop is simply reinventing it’s image to differentiate itself even more from the competition. With companies like Mantic and Chapter House out there trying to profit off of GW’s image it makes sense for them to become even more niche than before. Sure your game may have super human soldiers, but do they ride giant wolves? No, that’s what I thought. Even though they may sometimes make giant undead wizards with pope hats it still beats any other companies model’s in terms of detail and awesomeness. Most of their current aesthetic is actually an older aesthetic just like their “new” lore.
So the next time a new model comes out that may seem a little whacky with its design, instead of saying how it looks ridiculous say how “Warhammery” it looks. If there is one thing GW has done well, better then any other company I might argue, is define their image. There is nothing out there that you might mistake for a GW Warhammer model, either in terms of design, innovation or level of detail (don’t forget how everything is plastic now too!). Yes there are other games out there now, more than compared to even just a few years ago and if you like their design aesthetic better then GW’s then that is great and I am glad that you found something you enjoy. What I, and I think a lot of other people on the internet, don’t want to hear is someone in the comments section of some new GW model going on and on about how much better WarmaHordes is. I don’t spend my time trying to deflate people people’s perceptions of what they think is cool, so please return the favor. Critique is all well and good, but keep it constructive and positive. We all have an idea of what 40k or Fantasy should be, in terms of lore and design. Much of that comes from when you entered the hobby, but we have to remember that while we may want to hold it in stasis, it will change. GW are the keepers of these universes and they have 30 years of lore and models to draw from. Designers come and go and with them design choices. Andy Chambers was the overlord of 40k when I entered the hobby and he dictated much of how it was presented but he is gone now and so is his 40k, so remember:
Embrace the chaos.
What’s your opinion on GW’s current design choices, is it just the right amount of craziness and skulls or have they jumped the Space Marine riding Cyborg-Shark?
Tyler is a life long painter and hobbyist and took home his first Golden Demon award at the 2012 Chicago Games Day with a follow up at the 2013 North American Games Day. More of his work can be found at his blog, Mengel Miniatures. 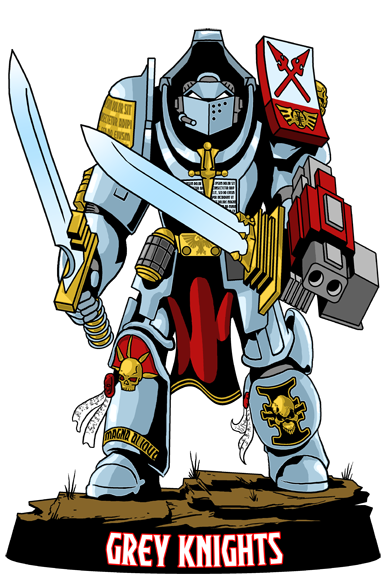