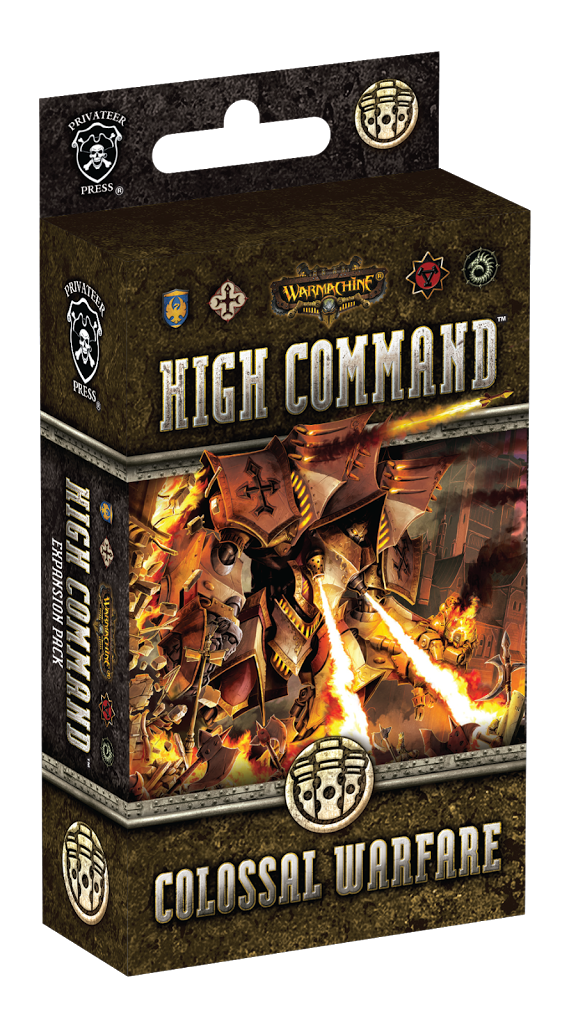 Colossal Warfare, the fifth expansion for Warmachine: High Command has released, bringing the crashing might of Colossals, Battle Engines, and Cavalry pounding into the fray. How will its impact be felt by High Command’s burgeoning metagame?

Like the Gargantuan Might expansion for Hordes: High Command, Colossal Warfare brings several new things to the table. As already mentioned, the high-cost, high-impact Colossals and battle engines are now represented in card form. Cavalry, which was previously unseen in Warmachine: High Command is also present, introducing cards with solid rush margins and typically high-impact.

Last, Colossal Warfare also brings new Resources to the Warmachine set, specifically VP-less, 3 CMD/3 WAR cards that effectively become 5 CMD/5 WAR when used for purchasing, deploying, or rushing Colossals or Battle Engines. The only thing that separates them across factions, aside from card title and art, is that they have different detachment distribution.

If you are planning on running Colossals or Battle Engines in your deck, these cards are really solid investments. While their lack of VP is potentially troubling where balanced or purchase-heavy builds are concerned, it is worth noting that every Colossal and Battle Engine is worth at least 1 VP and often as many as 3, which will nicely cover the VP lost for taking these new Resource cards.

Author: relasine
Relasine is a veteran tabletop wargamer with over 10 years of experience. His specialty is Privateer Press' Warmachine & Hordes gamesystem. He began writing for BoLS in 2010.
Advertisement
High Command Review Warmachine-Hordes
Advertisement