Malifaux: Cool Off with Rasputina

Summer heat getting you down? Cool off with the frigid tactics of Rasputina and her Children of December crew. With everybody at the secret bunker of BoLS going Malifaux crazy, I figured I’d use that as my momentum into M2E and Wyrd’s new plastic kit. I had initially been a grumpy pants about the whole thing, since Wyrd wasn’t going to be releasing my crew– The Dreamer–in plastic upon M2E’s initial release, but I got tired of waiting and just bought another crew altogether. Hooray for having no patience and no fiscal responsibility!

Also, yes those are pictures of my models and yes I can’t paint.

Who You Calling Little?! If you couldn’t tell already, Rasuptina is an ice themed crew and their abilities reflect that theme. Rasputina travels with three adorable Ice Gamin, but these guys pack a huge support role. They are 4 Soul Stones, Defense 4, Willpower 4, Speed 4 and with 5 Wounds. The Gamin are the perfect units to both lull your opponent into a false sense of security and shield your real strategy of running your Ice Golem down their throats. The Gamin have Explosive Demise 2, which upon their death–not sacrifice– will deal 2 damage to every model within 2 inches. The Gamin’s also have Armor 1 and Frozen Heart which makes them immune to Horror Duels and becoming Paralyzed (Sorry Pandora). So without their attacks, the Gamin are built to lock your opponent up and be little precious meat shields. Explosive Demise will help you win trades, while the damage reduction they have will keep them alive long enough to allow your heavy hitters to close in.
The Gamin have 2 attacks, one ranged and one melee, and one Tactical Action. Both Icy Claw and Ice Blast are one cost attacks with 1/3/4 damage output that takes a DF save to deflect. Icy Claw has a Tome Trigger that gives the damaged the Slow Condition. The Gamin’s tactical action is a free action, that allows friendly models within 6 inches and that have Frozen Heart–which all of Rasputina’s models have– +1 damage with all attack actions until the end of the turn. The only downside is you have to discard a card to do so, and the effects don’t stack so you can’t trigger it from all three Gamin. Still for the cost of a terrible Fate Card, you can add some damage output to your crew.  Get the Gamins into a good position so they can buff your crew and screen your opponents. Any damage they do on top of that is icing on the proverbial cake. The Wendigo is probably one of the most important models in Rasputina’s crew. He’s 3 Souls Stones, Defense 4, Willpower 4, Speed 6 and has 6 Wounds. His stat-line isn’t amazing, but it’s his abilities and attacks that make him persistent and infuriating. Companion lets Wendigo activate as a Chain Activation if a model ends its activation within 6 inches of him. So if your opponent isn’t already annoyed that Wendigo can just bound across the map as he pleases, Eat Your Fill allows the Wendigo to heal all damage it has suffered when it kills an enemy model. Yup. He gets into your face, taunts you to hit him and then laughs as he eats you to heal the damage.
Surely he can’t have good attacks too?! That would be crazy! Nay nay! The two, one cost attacks that Wendigo has are bonkers. Maw, a melee attack, has a damage output of 2/2/5 and resists on a Defense check. The Crow trigger, Pound of Flesh, imbues the crew’s leader with the Fast Condition upon killing the target model.  Devour is a spell with RNG one, TN 13  a tome and a crow, and Resists against DEF. If this spell hits, the struck model is sacrificed if it’s a living model and either height 1 or has the paralyzed condition. This attack has the same Crow trigger as Maw.  Keep in mind that killing something with either of these attacks does trigger Wendigo’s Eat Your Fill. So in theory, you can kill a model, give Rasputina the Fast Condition, and heal all your damage. Wendigo’s Tactical Action only sweetens the pot. Magical Extension, for one AP, lets Wendigo use one of Rasputina’s Ca spells with an AP cost of 1. Sadly, the spell suffers -3 Ca, but it’s not bad for an added burst of damage or casting December’s Touch on himself. Protect this model people! He wins games and is scary.

Giant, Stupid, and Big. Just How I Like Them. The Ice Golem is definition of a hulking monster. He is a whopping 10 Soul Stones, 2 Defense, Willpower 5,  Speed 4 and with 10 Wounds.  The Golem has Explosive Demise 3 and Armor 2, which works just like the Gamin’s  abilities but with added stats. He is a Melee Expert giving him an extra AP point to be used on MI actions. Icy Talon, a one cost attack that resists to DEF, has a damage output of 3/3/6. Icy Talon has two triggers. Chill triggers on a tome and gives the target the Slow Condition. December’s Sigh triggers on a tome and a crow, which gives the target -2 to their speed and charge until the end of their next activation.  Wendigo’s other attack, Smash, is a three AP monster attack that has a damage output of 9/10/12. It takes everything he has to do it, but if it connects you’re pretty much dead. The big guy has one tactical action, Toss, which lets him take a Ht 1 model within 1 inches and throw it up to 10 inches away. If the model hits another model, both models must take a TN 13 DEF duel or suffer 2 damage.  The Ice Golem is the giant threat of your crew. You walk him forward and just have him absorb shots. Your opponents will score tons of hits, but with Armor 2 and 10 wounds, probably won’t bring the Goliath down before he gets into melee range. All the better if they do though, because it’s more resources wasted on your tank rather than the Wendigo or Rasputina.

Burr, Does Anybody have a Jacket? The leader of our crew, Rasputina, is a the definition of an ice mage. She wants to sit back, throw spells and lock down her opponents with her stationary triggers. Rasputina brings a 3 Cache, 4 Defense, Speed 3 6 Willpower, and a hefty 12 wounds.  Her abilities are built around protecting little miss Ice Queen. Ice Mirror lets Rasputina draw LoS and range from a friendly model with Frozne Heart within 10”. All Ca actions used through the Arc Node, suffer a negligible -1 Ca, but cannot declare triggers. Essentially this is allows you  toshovel more damage at your opponent through December’s Curse or protect your friendly models with December’s Touch. Rasputina also has Counterspell, which makes enemy Ca actions targeting her lose all suits printed in the Ca, and Sub Zero which ends an attackers activation if she suffers melee damage.
Rasputina’s three abilities are where she really shines. Freeze Over is a one cost ranged spell that has TN 15 and range 6. It gives target model and all non-leader models in base contact with that model the Paralyzed Condition. The aforementioned December’s Curse is a range 12, TN 11 and a tome, resists to defense and has a damage of 2/4/5. Important to note that the medium and heavy damage carry one plume and two plumes respectively. If the crazy damage on the spell isn’t enough to entice you, he spell has two triggers. Surge, which hits on two tomes, lets you draw a card. Overpower, which triggers on a tome and a mask, lets you take this action again against the same target, but forfeits any triggers for the second attack. Rasputina’s final attack, Biting Chill, is a zero cost, range 2 spell that resists to defense. The target suffers 1/2/2 damage and if it triggers with a tome and a mask, you can take this action again on the same target. Rasputina’s tactical ability is a TN 11, range 12 ability that lets you give target model the Frozen Heart ability and Armor +2.

My Thoughts! Because My Thoughts Matter! Thanks Internet!

Rasputina is a slow, fragile model, but she hits hard. Using her models as arc nodes, she can potential trigger, Biting Chill twice, and then still have AP to trigger both December’s Curse twice, and protect her models with December’s Touch. My only worry is how squishy she’ll be. The Gamin and Golem’s Armor stat should provide enough cover to protect her, but if they get outflanked Rasputina is pretty dead. I think her and her crew have crazy potential for damage, if they can get inside the enemy lines. The crew is really slow, so any tactical objectives might have to forfeited in lieu of assassination runs. I mean, you have the option to huck models with the Ice Golem at your opponent, and Explosive Demise gives you some free damage if they die. The lack of speed and squishy caster, just means you’ll have to play carefully. Set your models up correctly and you’ll have the perfect ice wall to screen for Rasputina and Wendigo as they unload everything on high priority models.
Try expanding your crew with these models:
-Essence of Power
-December Acolyte
-Silent One( Take more than one)
-Snow Storm
There you go nerds! Let me know what you think of Rasputina and what lists you’ve built with her in the comments below. As always, if you want to see more from me, click here.

Malifaux - Guide to The Guild's Judgement 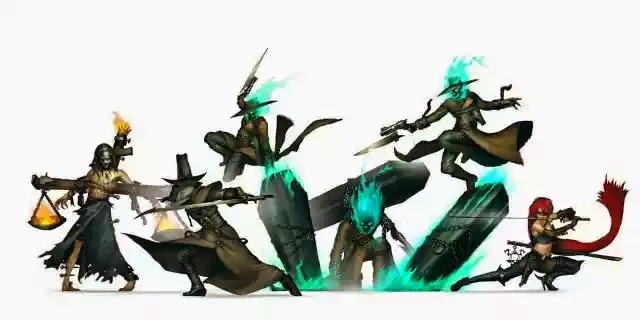