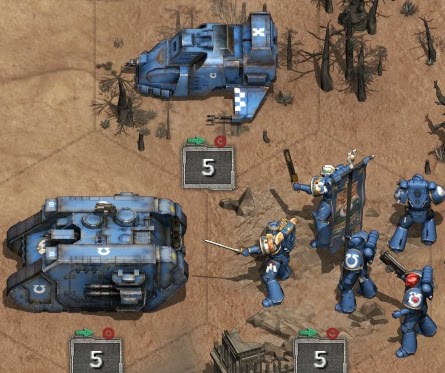 Slitherine is opening up a grand strategy 40K game to testing.  Get in there! First up the game itself:

Warhammer 40,000: Armageddonis set during the Second War for Armageddon. In this hex-based, turn-based game developed by Flashback Games and The Lordz Games Studio, players will lead the Imperial forces of the Armageddon Steel Legion and Space Marines from a variety of Chapters against the Ork invasion through over 30 scenarios, on the hostile terrain of the planet and its gigantic Hive Cities. The game features a complex plot, involving known characters from the Warhammer franchise and while advancing through the campaign, the player will have the ability to carryover his core force from scenario to scenario.

Players fight alongside Commissar Yarrik and Commander Dante against the cunning Ork Warboss Ghazghkull Thraka and carry over battle-hardened veterans from scenario to scenario, using their experience and upgrading their equipment.

Also extensive modding options are available through a powerful and easy-to-use game editor.

Features:
The game portrays the Second War for Armageddon in great detail, from the initial Ork landings to the final liberation of the planet
Large branching campaign with 30 major scenarios, plus additional 5 tutorial scenarios that explore the story in detail
A complex plot, which can develop during a mission, right in the middle of battle, creating an engaging story line with unexpected twists
Players lead Imperial troops of the Armageddon Steel Legion, with supporting assets from a number of Space Marine chapters against the ferocious Orks
Carry over battle-hardened veterans from scenario to scenario, using their experience and upgrading their equipment
Fight alongside Commissar Yarrick and Commander Dante against the cunning Ork Warboss Ghazghkull Thraka
Detailed combat model with terrain, weather and morale effects
300+ unit types representing Armageddon Steel Legion, the Orks, Blood Angels, Ultramarines and Salamanders Space Marine chapters and Titans.
20 different units stats, many unique special traits and abilities
A separate set of maps are designed and balanced specifically for multiplayer via Slitherine’s PBEM++ system
Extensive modding options delivered through a powerful and easy-to-use game editor.

And it’s in BETA! Today we are overjoyed to share with you that Warhammer 40,000: Armageddon, one of the most anticipated turn-based strategy games of the year, is getting ready for release! This detailed multiplatform wargame is now ready to enter the PC beta phase and we invite you to help us test it! By signing up for the beta, you will have a chance to be selected to be one of the lucky few, who will be able experience Warhammer 40,000: Armageddon before release and help us with the final touches, ensuring a smooth release later this year.

You can sign up for the beta by clicking here. So an old-school turn based strategy hex game, like they used to make in the old days, with with all the current 40K units for “Armageddon Steel Legion, the Orks, Blood Angels, Ultramarines and Salamanders Space Marine chapters and Titans.”  That’s Cool.  I dont think there has been on of these done since SSI’s 1997 “Final Liberation”, considered one of the best 40K games ever made.  In an era of more and more mobile games, it will be good to get back to basics with a nice “grand strategy” game.
~What do you think about it?