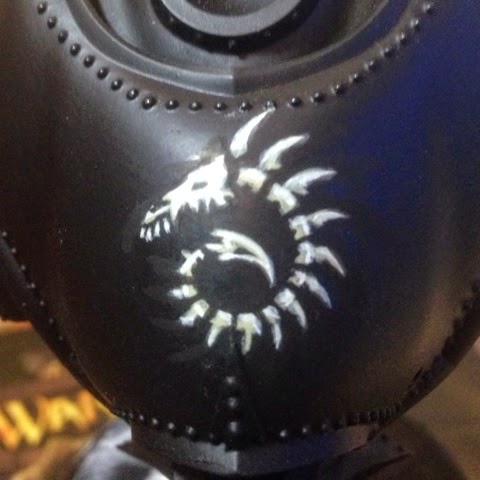 Freehand had always been a mystery to me, but after I got the courage to try it, the fear dissipated. Let me show you my freehand technique.
I will use as an example the Cryx’s symbol on the kraken. You can use my tricks to start doing freehand, or improve your style with ideas from my formula.
I started by drawing a rough sketch of the symbol to get an idea do what was the best way to do it. With the drawing at hand I deconstructed the line I would need to make the silhouette with a brush. Usually I have the background already highlighted before I start, but in this model I was going for a technique that would paint over the symbol.
I went to the colossal carapace and did guide lines for the spiral. The brush was the use to replicate the spiral, being careful to make the line skinnier toward the end. I used more water than usual to make the flow of the paint easier, this made the symbol translucent which helps in the end to give volume. An arrow was added to the end which will become the bone tail, and a rough shape of the head including a line for the base of teeth. Cleaning of the lines with the background color was necessary to make the lines sharp. Using the same color as the previous step, I made the divisions of the vertebrates, hole for the eyes/tail and made the division that became the teeth.
Once I had determined the vertebrate, I drew a second spiral that became the bone crest. The spines where made using the same method as above, with one stroke that ended in a tip. Cleanup used the background color to tighten the lines and finish the form.
The fun part start now. A brighter color paint than the one uses before, was mixed so that it flows, yet thick enough that I would stay where it was placed. The color was then used to highlight the sketch, being careful to stay in the symbol leaving a small space where the old paint shown through. The surface of the miniature will also dictate where the highlight has to be stronger. It simulates a light source hitting the area, which blends the freehand with the miniature. The second coat saturates the symbol so that it goes from translucent to opaque.
To finish the freehand cleanup and the shapes that were messed up in the previous step. Now look at your work and smile at doing a freehand symbol. There are other ways to do a freehand. This method is the one I use on my miniatures.
Here are more examples of some freehand symbols. I am still learning like everyone, but at least the fear is not there anymore. Remember that the more you try the better you will get. As always you can see more of my work at http://thepaintforge.com
Try the technique for yourself. and leave commentaries on how it worked. You can also post if you do freehand? If so, what tips would you give for people trying it for the first time?

Author: José Vélez
José is a long-time tabletop miniatures hobbyist and painter with over a decade of experience. He began covering the hobby and painting side of the miniatures industry for BoLS in 2014.
Advertisement
Game Tutorial Hobby Painting
Advertisement

Mortarchs: The Movie by GW